The uranium market has sold off substantially over the last month and a half. Even though the investment vehicles Yellow Cake (OTCPK:YLLXF) and the Uranium Trust (OTCPK:SRUUF) are often considered lower risk-investments, they have not been spared in the decline.

The decline in uranium equities is likely due to the general market and oil price correction, which has led to a risk-off sentiment in the market. The supply/demand dynamic for uranium will at worst be marginally impacted by the current turmoil though.

So, Yellow Cake is once again trading with a large 11% discount to NAV, while the discount for the Uranium Trust is slightly lower around 6-7%.

It was on the 22nd of November announced that the option will be exercised, and Yellow Cake would in turn buy back the uranium for delivery in March-April 2022. So, the net effect of the transaction will be a realized loss of $6.55M.

This did in turn cause Yellow Cake to drop 4% on the day of the announcement. However, this liability has been on Yellow Cake's balance sheet all along, and has been included in any net asset value calculations. So much for an efficient market I guess. 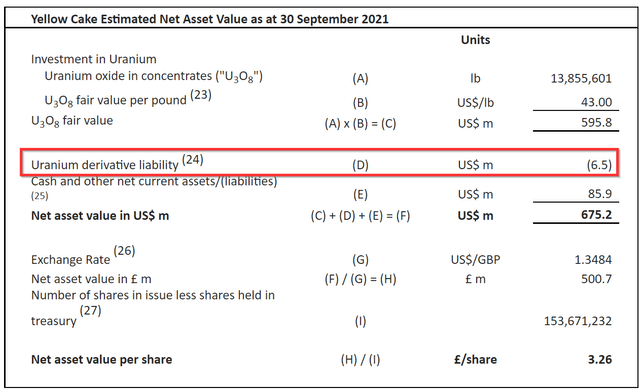 If we take the $29.5M of cash and other net current assets from the 5th of November, the derivative liability of $6.55M, together with the share price, uranium price, and USDGBP rate as of the 3rd of December. We get a total net asset value of $841M, which is up substantially over the last year from both uranium purchases and the increase in the price of uranium. 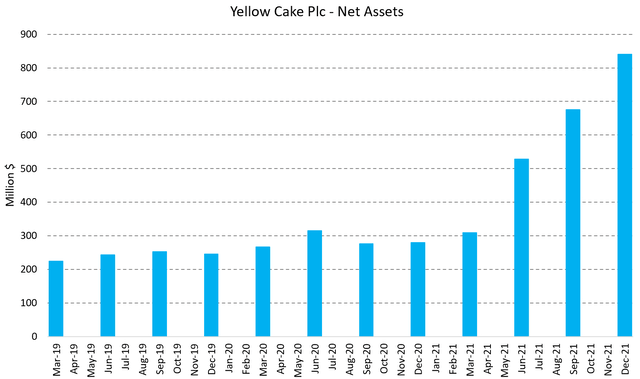 The decline in the stock price in excess of what we have seen for the price of uranium has led the stock to now trade with a fairly large 11% discount to NAV, which we have not seen since 2020 when sentiment in the uranium market was more depressed. 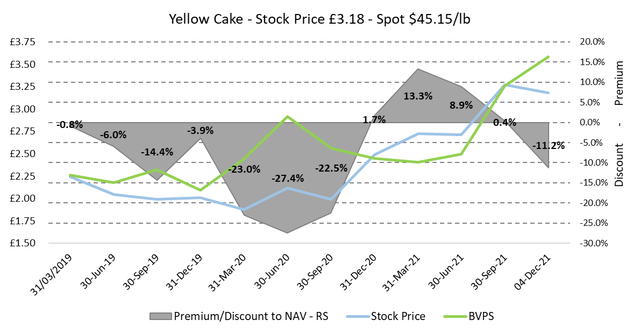 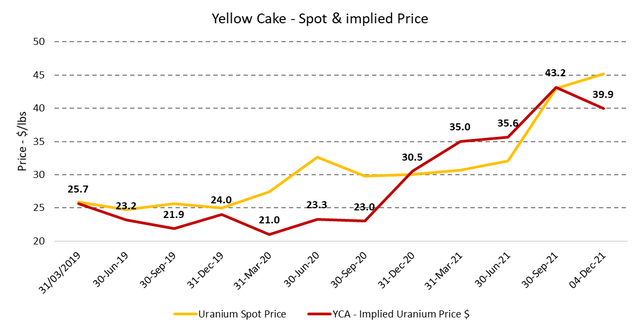 An 11% discount to NAV is equivalent to buying the uranium exposure at $40/lb. So, the risk-reward of Yellow Cake is very attractive at this level for a company with minimal operating risk. The price of uranium will need increase considerably from this level in order to resolve the current deficit which is being exacerbated by the uranium purchases from Yellow Cake and the Uranium Trust. 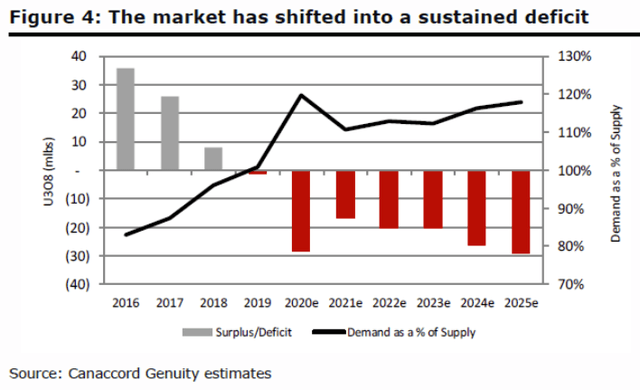 One potential near-term catalyst could be the inclusion of nuclear in the European Union's green taxonomy. While the timing of political decisions is always uncertain and there is some opposition to the decision, I really struggle to see anything but a favorable decision here given that nuclear is such an important energy component for many countries in the European Union. 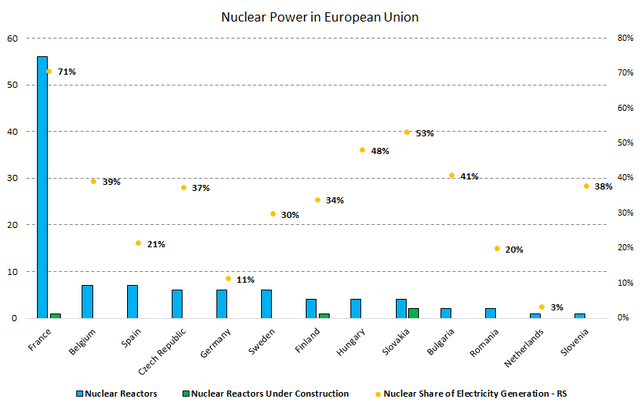 If you like this article and is interested in more frequent analysis of my holding companies, real-time notifications on portfolio changes, together with macro and industry analysis. I would encourage you to have a look at my marketplace service, Off The Beaten Path.

I primarily invest in turnarounds in cyclical industries, where I have a typical holding period of 1-3 years. Focusing on value offers good downside protection and can still provide great upside participation. My portfolio generated a return of 81% during 2020 and is up 48% YTD in November 2021.

Bang For The Buck
3.06K Followers
Author of Off The Beaten Path
A cyclical value approach, presently focused on precious metals and uranium

I am always happy to respond to comments and questions in my articles during the first few days. More in-depth ongoing discussions are had inside Off The Beaten Path.

Disclosure: I/we have a beneficial long position in the shares of YLLXF, SRUUF either through stock ownership, options, or other derivatives. I wrote this article myself, and it expresses my own opinions. I am not receiving compensation for it (other than from Seeking Alpha). I have no business relationship with any company whose stock is mentioned in this article.