I have been keeping an eye on American Finance Trust (AFIN) for over a year now and although the REIT's performance remains strong, it is usually met with skepticism by the existing shareholders. The Q3 performance was once again good, but the share price doesn't move and this could partially be caused by the company printing shares and selling them on the market as part of its ATM offering. In this article I'll dig a bit deeper into the ATM program and the impact on the per-share performance.

A good FFO and AFFO result in Q3, but the per-share performance will lag

Looking at the reported FFO and AFFO, it looks like American Finance Trust has set some major steps forward. Without getting lost in the details, you can see below the FFO increased by about $4.65M (or about 18%) while the AFFO jumped from $25.5M to $36M, an increase of just over 41%.

Although the REIT's revenue and FFO & AFFO increased, unfortunately the shareholders won't immediately see the per-share performance improve as American Finance Trust continues to sell shares on the open market as part of its At The Market equity offering program. This ATM program was initiated and announced in May 2019 and allows AFIN to sell up to $200M in stock on the market without having to pre-announce share sales.

The company sold in excess of 5.8 million shares in the third quarter for $49.9M in gross proceeds (indicating an average price of just over $8.50 per share) and net proceeds of $49.1M. That was pretty aggressive and brings the year-to-date total to just under 14.5M shares which yielded $128.2M in gross proceeds (indicating an average sales price of approximately $8.87/share). An additional net amount of just over 200,000 shares were issued as part of equity compensation plans. 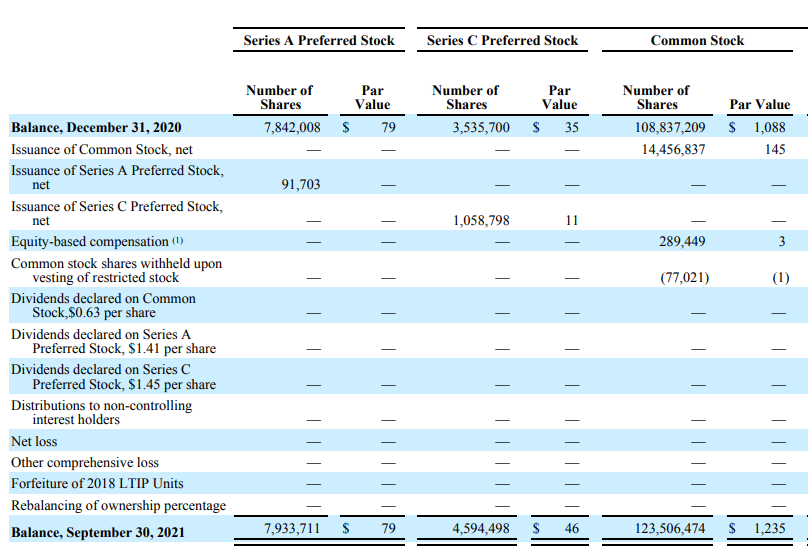 This means that while American Finance Trust started the year with less than 109M shares outstanding, it ended Q3 2021 with 123.5M shares outstanding. Interestingly, the share sales seem to have paused as the first page of the 10-Q confirms the total amount of shares outstanding as of October 29th remains unchanged compared to the September 30 share count.

This is good news for the preferred shares

While the common shareholders are obviously disappointed as the improving performance for commercial real estate is not being reflected in the per-share performance due to the dilution, there's one asset class that will be happy to see the company printing more shares: the preferred shareholders.

Looking at the balance sheet, you see the equity value is about $1.77B, including the just over $312M in preferred equity. 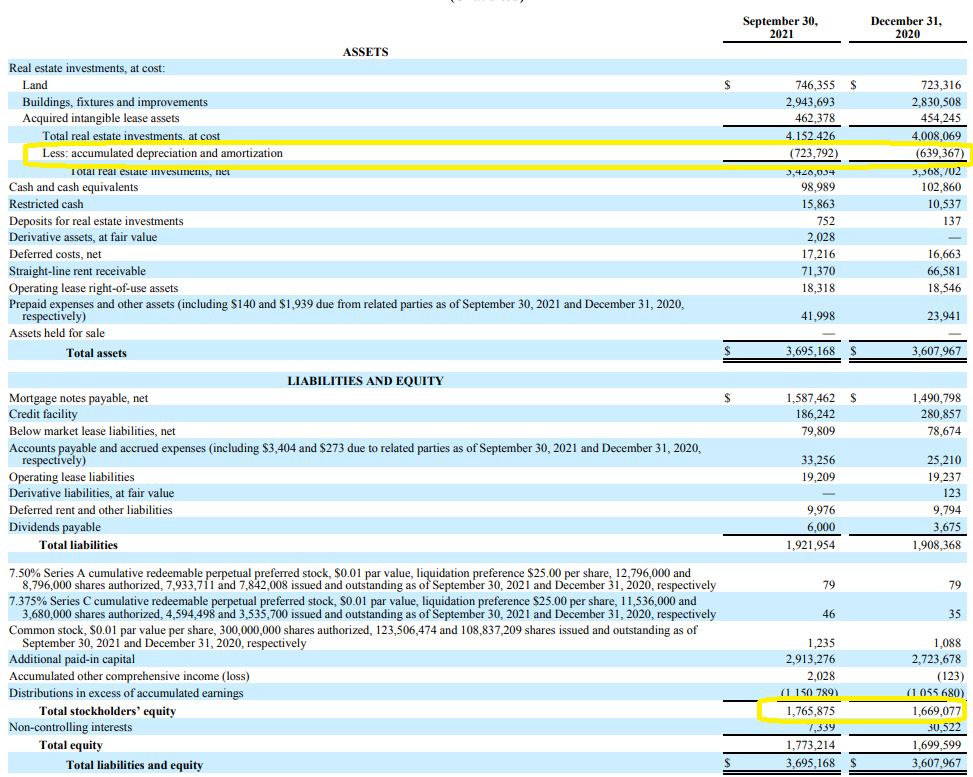 While the coverage ratio at the end of 2020 seemed higher, I still think the preferred shares are now safer than before. The book value includes the accumulated depreciation on the real estate assets, and looking at the image of the balance sheet above, we see the total amount of depreciation has increased by about $85M.

If we would run the numbers again by using the undepreciated value of the real estate, the year-end 2020 pro-forma equity value would have been $2.31B resulting in a coverage ratio of 813% of the preferred shares. While this ratio drops just below 800% as of the end of September, we should also have a look at the margin of safety expressed in absolute numbers.

I have no position in American Finance Trust and seeing how aggressively AFIN has been issuing stock as part of its ATM program, that's unlikely to change soon although I may be interested in writing some out of the money put options if the option premiums make sense. I however do have a long position in both preferred share issues as I like the risk/reward ratio. The dividend coverage ratio is strong and the ATM sales of the common shares are actually a clear positive for the preferred shares as the common shares obviously rank junior to the preferred shares.

The Investment Doctor
16.83K Followers
Author of European Small-Cap Ideas
We zoom in on capital gains and dividend income in European small-caps
As I'm a long-term investor, I'll highlight some stockpicks which will have a 5-7 year investment horizon. As I strongly believe a portfolio should consist of a mixture of dividend-paying stocks and growth stocks, my articles will reflect my thoughts on this mixture.

Disclosure: I/we have a beneficial long position in the shares of AFINO, AFINP either through stock ownership, options, or other derivatives. I wrote this article myself, and it expresses my own opinions. I am not receiving compensation for it (other than from Seeking Alpha). I have no business relationship with any company whose stock is mentioned in this article.