Editor's note: Seeking Alpha is proud to welcome Brett Rodway as a new contributor. It's easy to become a Seeking Alpha contributor and earn money for your best investment ideas. Active contributors also get free access to SA Premium. Click here to find out more »

Bitfarms (NASDAQ:BITF) has exploded in market cap over the last year; however, I still believe it is undervalued and is a buy. Bitfarms' hashrate growth has outpaced that of the total network, thus increasing network dominance. The BITF story is dependent on the long-term acceptance of Bitcoin, so it should not be considered as a short-term cryptocurrency play. In comparison to the other industry players, Bitfarms is severely undervalued and overlooked. As such, BITF is a must-own for the long-term Bitcoin bull.

BITF has contracts in place to secure additional miners to increase the hashrate to 3 exahash/s in Q1 2022 and to a total of 8 exahash/s by EOY 2022, which will outpace the growth of the total network, if the network grows similar to the historic rate. 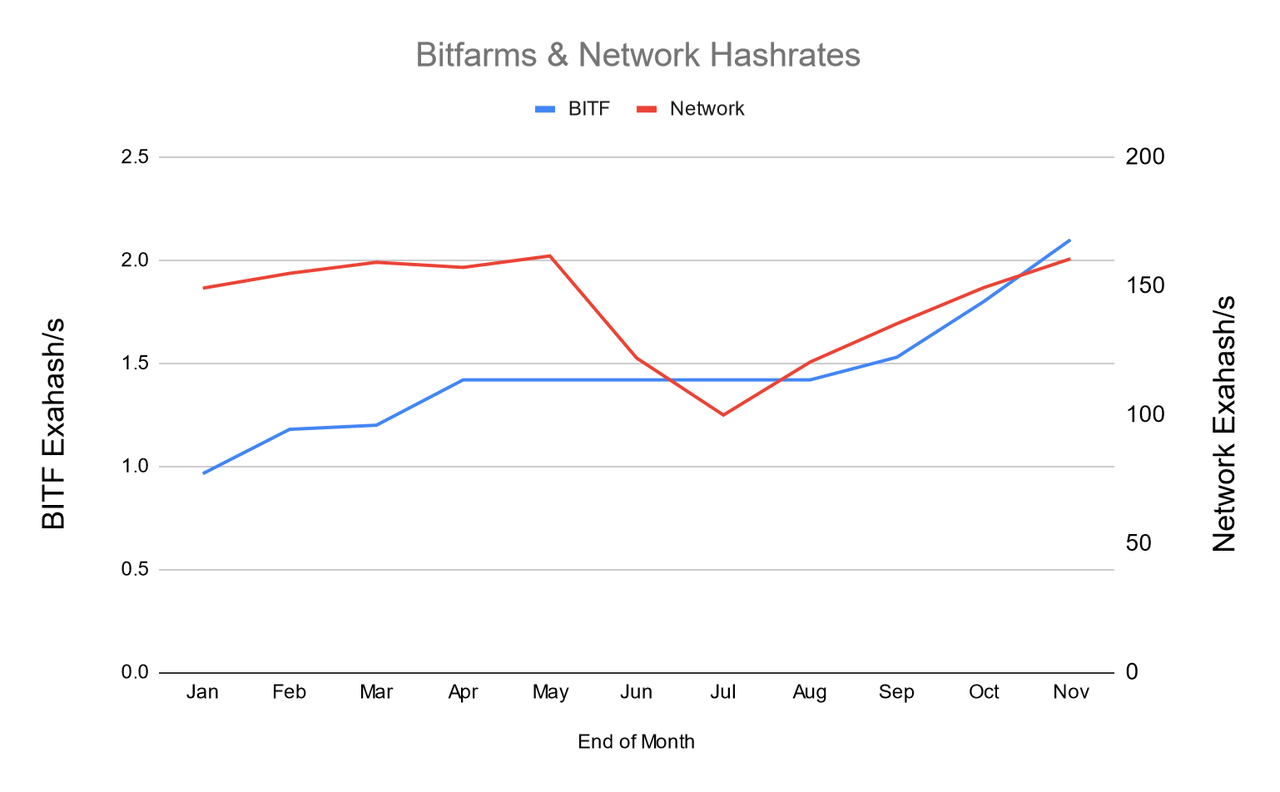 Bitcoin mined has been on a general uptrend. The June and July bump was due to China's mining ban, which caused a significant drop in the network hashrate until many of the miners were relocated. Bitcoins mined will be disrupted during halvings, the next of which is expected in May 2024. To maintain an equal amount of bitcoins mined before and after the halving, BITF's network dominance needs to roughly double, which it should currently exceed. 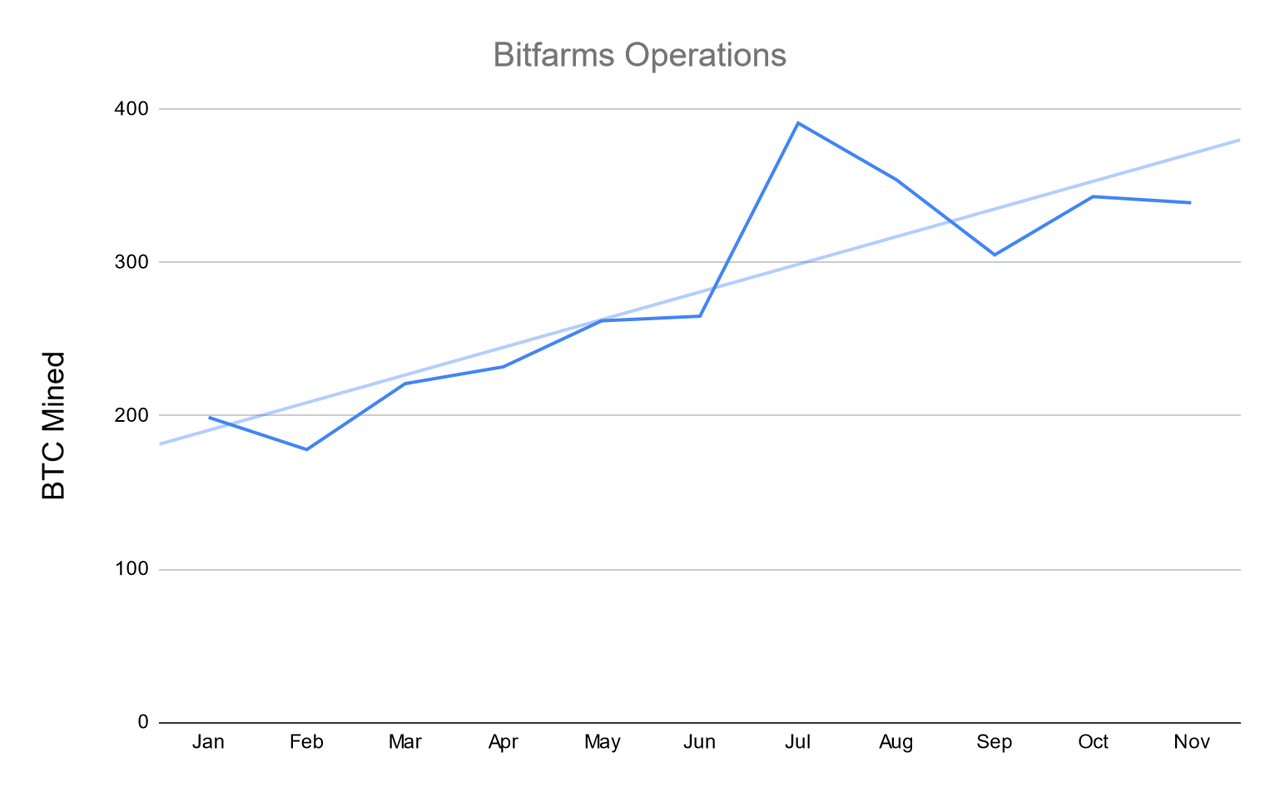 For conservative valuation purposes, Bitcoin mined is considered stable and the growth is factored in by the price appreciation of Bitcoin. Price growth is a significant driver of longer-term value due to BITF's Bitcoin retention program where currently >95% of the mined coins are retained. 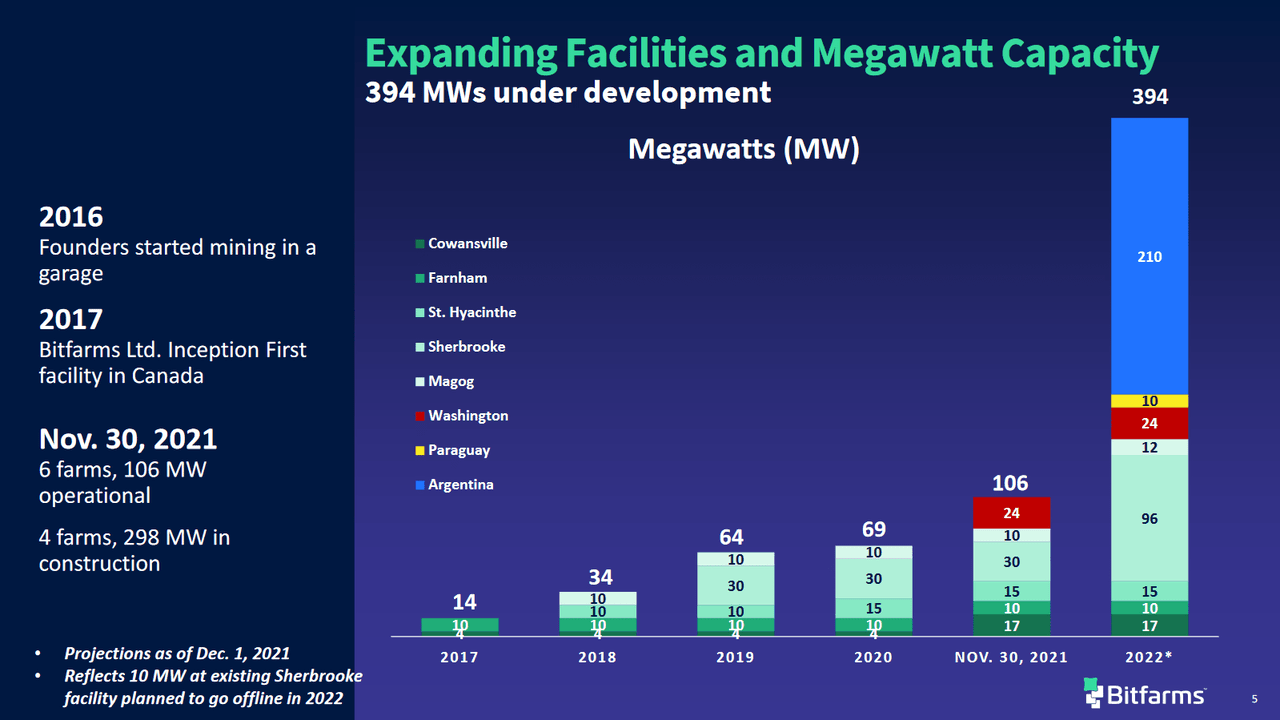 Q3 2021 cost of mining is $6,700, down from $9,000 in Q2 2021, as well as lower than the previous year's Q3 of $7,500. A shrinking cost per Bitcoin while the price per Bitcoin is rising creates a larger operating and profit margin. The costs are primarily driven by electricity costs. Bitfarms has strategically placed their farms in low-cost areas such as Sherbrooke, Quebec for its hydroelectricity. The diversification in locations minimizes the overall variance in electricity prices if a location experiences regionally driven changes in price. Contracts for energy are in place for the Quebec, Paraguay and Argentina mining facilities. With the exception of Argentina which uses local natural gas, all other facilities use hydroelectric power.

BITF is the smallest of the selected companies while having the second-best P/E (FWD), gross profit %, and P/B. Although holding debt, BITF, HUT, RIOT all have large enough cash holdings to pay off the total debt immediately, while HIVE would be unable to do so. 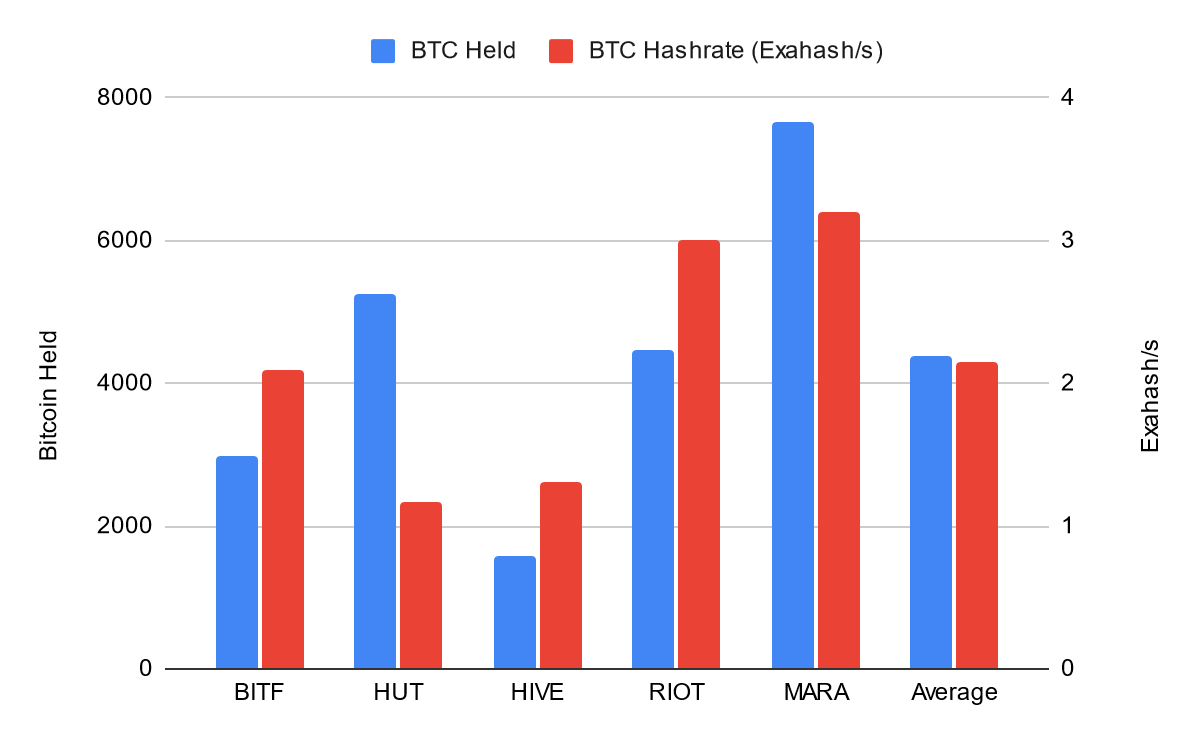 MARA is the largest publicly traded Bitcoin miner coming in at $4.27B market cap, as well as the largest mining power of 3.2 exahash/s. HIVE and HUT also mine Ethereum whereas the other companies do not; if converted to equivalent Bitcoin based on the price mined, they have the equivalent of 2.3 exahash/s and 1.7 exahash/s respectively. Ethereum mining has a short lifespan remaining if proof-of-stake is enabled at the expected date of June 2022; however, this has been pushed back multiple times so the date needs to be taken with a grain of salt. Assuming POS is enabled, HIVE and HUT would lose a major portion of their mining income when switching to another GPU mined coin or most likely a material loss on sale when disposing off the mining GPUs. The switch to POS has a high potential of flooding the GPU market similar to the post-2017 bull market, further lowering the recovered value. The potential for a short life of Ethereum mining is why I have not included it in the hashrate values as equivalents.

On the surface, MARA looks like the king of miners. That may currently be true on absolute values, but when taking into account the current market caps it is a poor value. 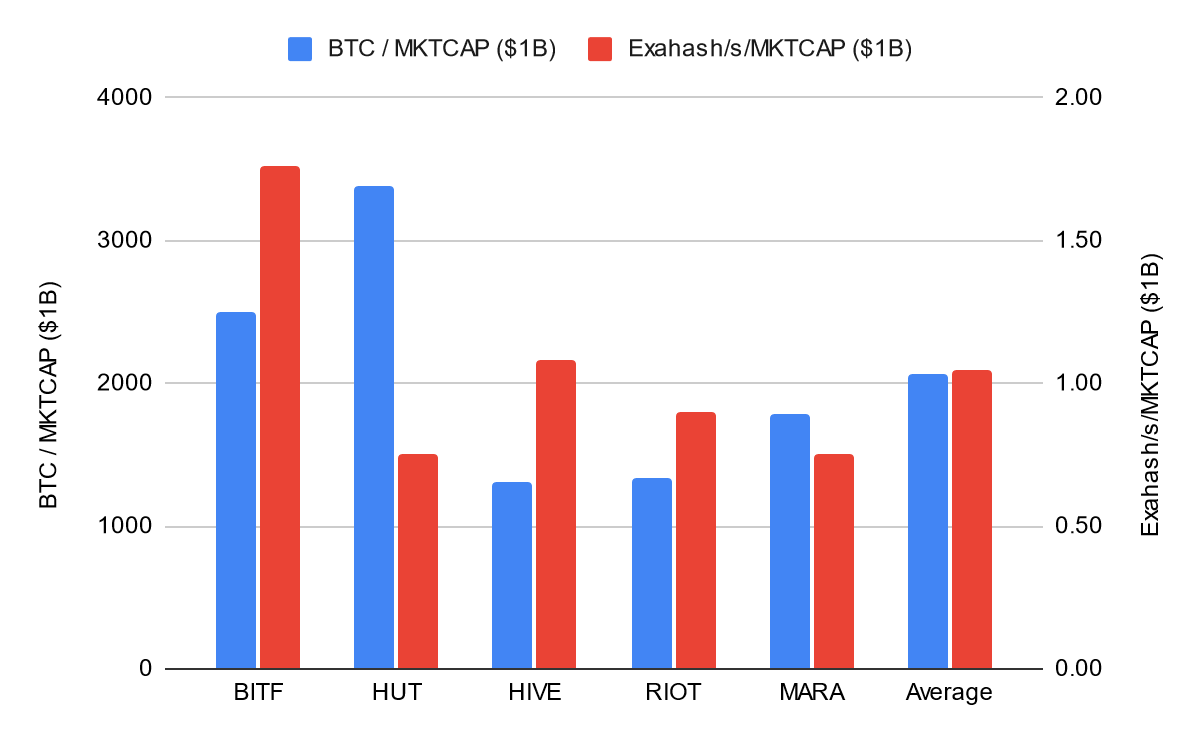 BITF is dominant when considering the price paid for the value received from mining, followed by HIVE. HUT currently has a better value when it comes to the Bitcoin held, while BITF ranks second on this metric. Both metrics highlight the fact that BITF has been overlooked by many investors. If BITF were to be solely valued as a simple multiple of the industry average price/hashrate, it should be worth ~$10.47.

I used an adjusted free cash flow model for valuing Bitfarms. A CAPM model is used for the discount rate. A beta of 1.43 is derived from 5-year monthly returns of S&P500 and Bitcoin as a proxy, due to BITF's significant capital changes and its short public trading life. Risk-free rate is currently negligible and assumed as 0% and the market rate used is 8%, arriving at a discount rate of 11.43%.

Digital assets mined are added back to create a fair valuation of operations, as well as being a near-cash asset that can be liquidated with minimal slippage.

Bitcoin's price history is used to calculate the expected growth. The current and last cycle's daily average returns are annualized to smooth out the cyclicality. A growth decay factor is calculated by taking the change of growth between the two cycles and the raw growth decay rate is forecast at -8.60% while the high decay rate is at 2x that figure, at -17.20%. This model is more conservative than the popular stock-to-flow model. 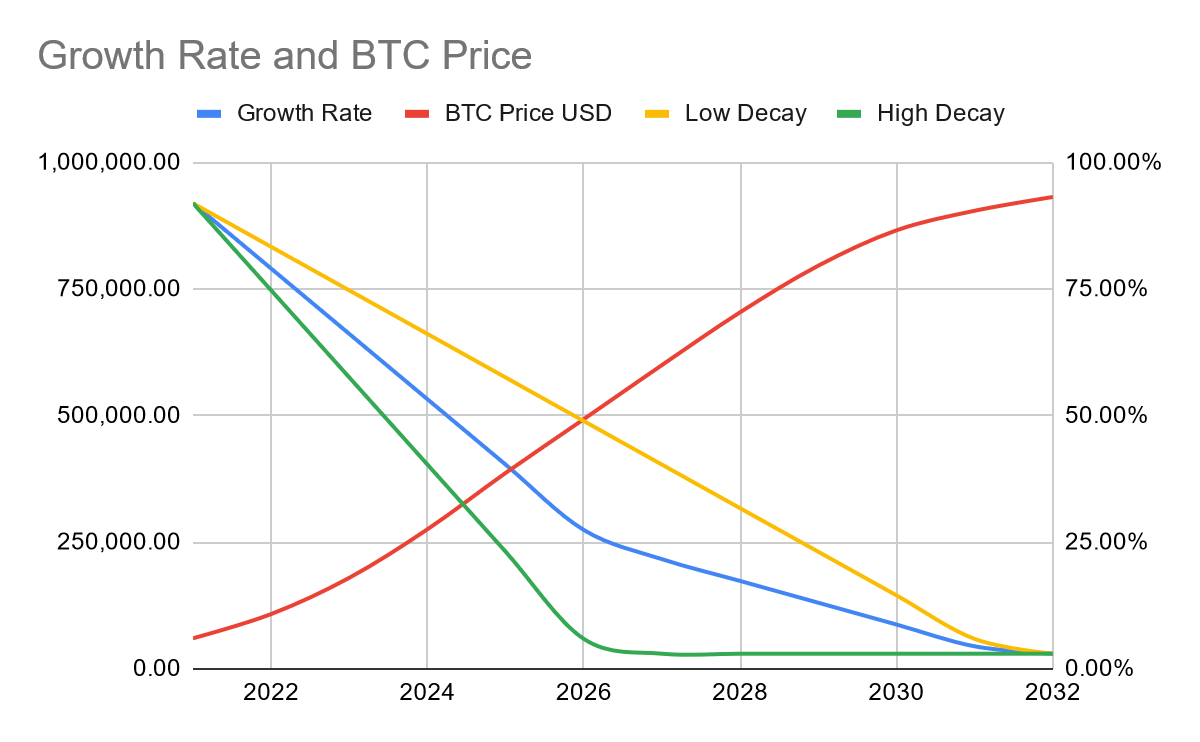 The resulting growth numbers are used to forecast free cash flow until 2032, then after a terminal growth rate of 3% is used.

BITF obviously has significant risks due to being embedded in the Bitcoin market. Short- to medium-term price declines could cause more dilution of the stock if BITF decides to issue equity over selling Bitcoin which they have done in the past. The acceptance and general growth of the Bitcoin market is the most significant - if the market becomes stagnant or declines, BITF's value would be reduced significantly. Acceptance can occur by growth in general public, institutional, and governmental usage. Policy risk, whether directly against Bitcoin mining or Bitcoin transactions, could significantly decrease the price of BITF operations. The production of mining hardware is dominated by only a few organizations which are located in China, which has already restricted Bitcoin operations significantly.

BITF is undervalued and has an upside of 71% from the current price level of $6.05 (as of close December 5th, 2021). BITF needs to be considered a long-term play due to the Bitcoin retention program, and its superior hashrate for the price compared to the competition. If you are a Bitcoin bull, BITF should be in your portfolio.

Brett Rodway
217 Followers
I take a holistic view of investing, with a top down approach looking for value deviations. Heavily interest in technology, but look for value anywhere!CFA level II candidate, holding a BBA in Accounting and Finance .
Follow

Disclosure: I/we have a beneficial long position in the shares of BITF, BTC-USD, ETH-USD either through stock ownership, options, or other derivatives. I wrote this article myself, and it expresses my own opinions. I am not receiving compensation for it (other than from Seeking Alpha). I have no business relationship with any company whose stock is mentioned in this article.