With the end of the year in sight, the US economy continues to show signs of a sharp pickup in growth in the fourth quarter, based on several nowcasts.

The US Bureau of Economic Analysis is expected to report in late-January that output rose 5.4% (annualized real rate) in Q4, via the median of several nowcasts compiled by CapitalSpectator.com. The estimate marks a dramatic upside reversal from the slowdown in Q3 that cut growth to a modest 2.1%. 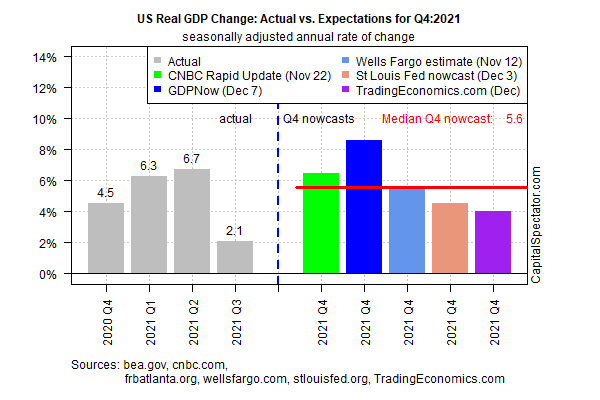 Although roughly a third of the fourth quarter’s economic data has not yet been published, the available numbers to date suggest that the final quarter of 2021 will deliver upbeat news for the US.

The fact that recent nowcast revisions have been relatively steady at the 5%-plus level strengthens the outlook that output has accelerated. Today’s revised median 5.6% nowcast is up from 5.0% in the Nov. 16 update.

Recent survey data aligns with the firmer expectations for Q4 economic activity. “The US economy continues to run hot,” observed Chris Williamson, chief business economist at IHS Markit, on Nov. 23, citing the consultancy’s US Composite Output Index, a GDP proxy. “Despite a slower rate of expansion of business activity in November, growth remains above the survey’s long-run pre-pandemic average as companies continue to focus on boosting capacity to meet rising demand.”

The main question is whether the rebound proves fleeting? Looking ahead to 2022 suggests that economic activity could slow in the new year due to potential blowback from the omicron variant of the coronavirus, higher inflation and other factors.

Goldman Sachs, an investment bank, recently cut its forecast for US growth in the new year. “While many questions remain unanswered, we now think a moderate downside scenario where the virus spreads more quickly but immunity against severe disease is only slightly weakened is most likely,” says Joseph Briggs, an economist at the firm.

This week’s update of the UCLA Anderson Forecast has also trimmed the outlook for early next year, revising its Q1 2022 growth estimate down substantially to a 2.6% gain from the 4.2% predicted in September. The key assumption: the omicron variant “might be disruptive, while acknowledging that its effects cannot be predicted.”

Perhaps, but the good news is that economic momentum looks set to deliver a strong tailwind going into 2022.

James Picerno
5.62K Followers
James Picerno is a financial journalist who has been writing about finance and investment theory for more than twenty years. He writes for trade magazines read by financial professionals and financial advisers. Over the years, he’s written for the Wall Street Journal, Barron’s, Bloomberg Markets, Mutual Funds, Modern Maturity, Investment Advisor, Reuters, and his popular finance blog, The CapitalSpectator. Visit: The Capital Spectator (www.capitalspectator.com)
Follow
2 Comments