While a Form S-4 has still not been filed with the SEC for the Digital World Acquisition Company's (NASDAQ:DWAC) deal with Donald Trump, there was an 8-K filing on December 6 regarding a $1.0 billion PIPE financing deal that included a number of updated details about the proposed merger. There were, however, a number of incorrect statements made by inventors on social media platforms about these details that I hope will be clarified in this article. I will again try just to stick to the legal and financial issues, but there are a few new political issues that need to be covered as well.

The Value Of How Much Trump Is Getting

In my prior DWAC article I estimated that Trump could receive up to 125.78 million shares based on DWAC's anticipated redemption price of $10.20 as stated on page 23 of their S-1A filing. Their figures in the latest filing seem to be using a $10 price instead of $10.20. The $0.20 difference results in an additional 1.72 million shares or about $96.3 million paid to Trump using the current $56 stock price.

Their December 6 SEC 8-K contains information about their proposed $1.0 billion convertible preferred stock PIPE financing. These preferred shares are being purchased by a group of institutional investors and are initially convertible into 29,761,905 shares of the newly merged company's stock at an initial conversion price of $33.60 per share. The $33.60 figure was a 20% discount to the VWAP price of DWAC stock 5 days before and including December 1, 2021.

This $33.60 is subject to a potential adjustment. This is critical for DWAC investors to understand. If the new stock 10-day VWAP is at or above $56 there is no adjustment. If the average price is below $56, the conversion price is adjusted 40% lower to as low as $10 per share and $10 per share would mean the holders of the preferred stock could be converted into 100 million shares. For example, if the average trading price is $40, the conversion price would be $24 and the preferred holds could convert into 41.66 million shares of the new stock. The important issue for DWAC holders is that the more shares of the new company preferred shareholders receive, DWAC shares would be diluted.

It is ironic that the holders of the preferred stock actually hope that for the first 10 trading days after the merger that the new stock plunges in price. The lower the price the more shares they will receive when they convert their preferred stock, if the new stock is trading below $56. If it trades above $56 there would be no impact.

The potential 100 million share amount has caused confusion, especially the way it was presented in the 8-K filing. At first glance, it looks like the total shares of the new company will be 224.7 million. As stated on the top of their table "based on $10/share". (See table below.) If the average share price is higher than $10 then this 100 million and the total figure would be lower.

Using the 29,761,905 share number from converting the preferred shares, based on the initial price of $33.60, and the current DWAC stock price of $56, the total current market value is about $1.67 billion. Now some may assert that the $33.60 is way too favorable of a price, but the reality is that many PIPE financing deals use $10 per share. PIPE financing in SPAC deals is usually not cheap because of the very high risks associated with many SPAC deals. Just look at the BuzzFeed (BZFD) deal with the new stock dropping about 40% within days after the SPAC merger with BuzzFeed. The value of BuzzFeed's PIPE financing of $150 million convertible bonds dropped as well.

(Note: I wrote a SA article on the major issues associated with the BuzzFeed SPAC deal, but because of issues regarding the content of the article about points I was asserting, it may not be approved by senior SA management. It is still pending and if it is not published as a SA article, I will post it as a Blog post instead with a link in the comment area below.)

I am personally relieved to know that Trump is not issuing a large debt security to raise cash as part of their initial SPAC deal. He has a reputation for using a lot of debt in his business operations. The use of convertible preferred stock is a more conservative financing approach to raising needed cash than issuing debt. I do, however, expect debt will eventually be used to grow their business model.

Some people seem confused by the enterprise value. The $12.2836 in the table below, assuming a full earnout, is not some estimated enterprise value based on a financial advisor's estimate, it was determined based on the market price of DWAC stock of $72.76 and DWACW warrant price of $37.04 on October 28. Using the $72.26 stock price and $12.984 billion equity value, they are using 178.46 million for shares outstanding in their calculations. This is somewhat larger than the 177.7 million I estimated in my last article. Most of the difference can be explained by using $10.00 instead of $10.20 as I explained above.

The 178.46 million shares do not include the shares from any conversion of the preferred stock. This number will not be known until 10 days after the trading of the new stock. Assuming the average stock price is above $56, there would be an additional 29,761,905 shares or about 208.22 million total shares outstanding. Using that total number of shares and 28.8 million shares that DWAC public shareholders will receive under the merger, DWAC public shareholders will receive approximately 13.8% of the new company's stock. 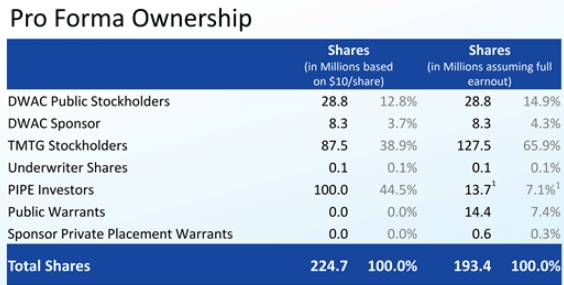 There was actually no "1" footnote reference in their filing from this table, so I am uncertain how they determined the 13.7 million shares and 7.4% ownership for PIPE investors. This difference also impacts their 14.9% ownership number for DWAC public shareholders.

The 12.8% ownership number for public DWAC shareholders in the above table assumes a $10 average stock trading price after the merger. It is interesting to note that if the average stock price after the merger trades close to $10, the PIPE institutional preferred shareholders collectively would control the new company and not Trump. Using $10, the preferred shareholders would control 44.5% and Trump would only control 38.9%. (If I were to structure this deal I would have issued at least some Class B shares to Trump with the voting power of 20 votes compared to 1 vote for Class A shareholders to make sure that Trump will control the company. I seriously doubt it will trade near $10, but I am always very careful when I structure deals.)

Given Donald Trump's salesmanship approach to his business ventures, it is not surprising that comparing this new media company to very successful media companies such as Disney (DIS) and Facebook (FB) is being used in their presentations.

The major problem I have with their presentation and projections is that their focus seems almost all on revenue. While you need revenue to make a profit and get positive cash-flow from operations, it does not necessarily mean that the venture will be profitable. The metric enterprise value/revenue that became popular in the late 1990's for these types of businesses is not a true indication of value, in my opinion. I want to see growth in net earnings per share or cash-flow per share. Many companies have had very high revenue growth just before they filed for Ch.11 bankruptcy because they burned a lot of cash to achieve this high revenue growth.

The number of users of their Truth business sector is projected to reach 81 million by 2026 based on a poll of registered voters by Politico, according to their presentation material. These numbers seem to ignore the huge number of international followers of Trump. Their market research studies should, in my opinion, focus not only on the U.S., but internationally, in order not to miss a very large potential market. This 81 million could, therefore, be much higher if international users are included.

TMTG subscribers are projected to be 40 million by 2026 with a projected $9.00 monthly subscription fee. It seems that this projection includes both domestic and international potential subscribers based on their basis of this projection. This may seem high because many consumers are reluctant to pay monthly fees, but monthly fees have become the norm lately. Even Seeking Alpha changed their business model to charging fees for their premium program to read articles. Many SA contributors, including myself, were worried that this would have a negative impact on the SA business model. It has actually been very successful for SA and payments to SA article writers.

Potential Delay In The Merger Deal

The original timetable I used for completing this SPAC merger deal was the end of 1Q 2022 and in their December 6 filing there was an item contained in their late October presentation material that stated "expected transaction close is 1Q 2022". Given the SEC investigation mentioned in their 8-K filing and Sen. Warren's attempt to block the deal, it is unclear if this deal could drag on and on in an attempt to kill it with delays. These actions by the SEC and Sen Warren come as no surprise and impacted my original "neutral" rating for DWAC stock. The recent selection of Congressman Devin Nunes as CEO could make the approval process of the Form S-4 by the SEC even more political.

The $1 billion deal is only the beginning of the capital needed to grow the new company. I was encouraged that they did not initially use debt as a way to raise cash. While their presentation material was interesting, I am waiting for EBITDA and cash-flow projections that should be contained in their S-4 filing. Until I read those projections I am keeping my neutral rating for DWAC stock and warrants.

Hopefully this article clears-up some statements by others about shares outstanding and the conversion feature in the preferred stock. I actually expect the numbers in the S-4 will cause even more confusion when it is filled.

WYCO Researcher
6.25K Followers
B.A. in Economics; M.S. in Finance. I usually write about distressed companies and companies in Ch.11 bankruptcy. I am semi-retired after spending decades in investments.
Follow

Disclosure: I/we have a beneficial long position in the shares of DWAC, DWACW either through stock ownership, options, or other derivatives. I wrote this article myself, and it expresses my own opinions. I am not receiving compensation for it (other than from Seeking Alpha). I have no business relationship with any company whose stock is mentioned in this article.