Intel (NASDAQ:INTC) announced on Dec. 7, 2021, that the company is planning to publicly list shares in its Mobileye self-driving car unit, which could value the unit at more than $50 billion. Mobileye is expected to deliver more than 40% revenue growth this year compared to last year, with 41 new program wins from more than 30 automakers.

Intel has big plans to reposition the company as one of the leaders in semiconductor production. These unfortunately require a lot of money as shown below:

In addition, Intel had planned on spend $400M to turn its Jerusalem-headquartered Mobileye unit into an R&D campus for self-driving vehicle innovation. The company will be spending $200M to build a new R&D center and "mega chip design" facility in Haifa next to an existing development center. The new facility will employ 6,000 workers.

In order to fund these activities, Intel announced the decision to publicly list its Mobileye unit in the middle of 2022 via initial public offering. Mobileye was purchased for $15 billion in 2017, with the value coming from software and services opportunities for autonomous vehicles and advanced driver assistance systems. It has been estimated that Mobileye is now worth $50 billion, a more than three-fold increase in just four years.

Mobileye technology is based on the use of optical vision systems with motion detection algorithms running on a custom hardware accelerator – the EyeQ chip. The Mobileye system consists of two key components:

Mobileye’s system-on-chip (SoC) – the EyeQ family – provides the processing power to support a comprehensive suite of ADAS functions based on a single camera sensor. In its fourth and fifth generations, EyeQ will further support semi and fully autonomous driving, having the bandwidth/throughput to stream and process the full set of surround cameras, radars and LiDARs.

Despite being owned by Intel, Mobileye has never used Intel’s factories to make its chips. Mobileye uses STMicroelectronics (STM) for its chip design. The earlier EyeQ processors used STM’s manufacturing process, but the newer ones use TSMC (TSM). STM worked with TSMC to develop the automotive process that EyeQ uses.

While Mobileye touts numerous customers, Qualcomm (QCOM) announced cooperation with BMW at the 2021 Investor Conference. The latter’s new cars will use the Qualcomm Snapdragon Ride autonomous driving platform (including chips) from 2025.

In addition to a certain gap in performance, discussed later in this article, Intel's 3940 chip belongs to the E3900 series and was released in 2016 with a 14nm process. At the beginning, it was mainly used as a consumer-grade chip, and then it was decentralized to the car level. The car-level is the A3900 series, and the cost is about $40. Qualcomm's S8155 is a mass-produced 7nm car-grade car chip, and the cost is around $100.

Most autonomous vehicles employ a system of cameras, radar, laser sensors and other technologies to assess road conditions and adjust driving behavior. These vehicles might have adaptive cruise control, traffic lane adjustments and automatic braking, steering and acceleration.

While a single chip's computing power TOPS is a key indicator, it's not the only one. Autonomous driving is a complex system that requires car-road-cloud-side collaboration. Therefore, in the competition of autonomous driving chips, in addition to the core, there is also software and hardware collaboration, as well as platforms and tool chains.

Details about competitor products and plans are below.

The Intel A3900 series, based on the X86 architecture design, was released in 2016 with a 14nm process. At the beginning, it was mainly used as a consumer-grade chip, and then it was decentralized to the car-level. The car-level is the A3900 series, and the cost is about $40.

The upgraded version of EyeQ4, EyeQ5, was released in 2020. It was only installed on Geely Automobile’s Geely 001 model for the first time in the fourth quarter of this year. EyeQ5 uses a 7nm FinFET process and has a computing power of 24 TOPS.

SA8155P is an integrated, next-generation automotive cockpit platform. It is a 7nm SoC designed with custom hardware blocks including: An octa-core CPU subsystem featuring the 4th generation Qualcomm Kryo CPUs based on the ARMv8 architecture. The SoC utilizes a highly efficient machine learning architecture consuming less than 7 W to deliver 10 TOPS of performance.

Qualcomm’s fourth-generation Snapdragon automotive digital cockpit platform, the SA8295P, uses a 5-nm process technology and has a TOPS of 30.

The computing power of a single SoC of Nvidia Atlan reaches 1000 TOPS (expected to provide samples to developers in 2023).

Huawei is positioning itself as a Tier 1 supplier and building a "5G automotive ecosystem", which is aimed at the high-level autonomous driving market and cannot be ignored.

Founded in 2015, Horizon Robotics makes AI chips for autonomous vehicles and machines. It also makes software customized to these chips, which can be installed in everything from vehicles to smart speakers.

If car companies use multiple chips to build autonomous driving domain controllers, they can reach a maximum of 1,024 TOPS, which can support L4 autonomous driving. The Journey 5 chip has an 8-core ARM Cortex A55 CPU and a dual-core Horizon Bayesian architecture Brain Processor Unit (BPU) AI computing unit.

Black Sesame Technologies' new self-driving chip, the A1000 Pro, has taped out with a record high computing performance among such chips built by local companies. The A1000 Pro is based on the company's A1000 chip, which is optimized to achieve 106 TOPS of computing power as standard and up to 196 TOPS in the acceleration mode, according to Black Sesame.

Xin Chi is a semiconductor company based in China, focusing on next-generation high-performance automotive-grade chip solutions. The V9T launched in 2021 has a TOPS of 1.

At present, the V9 (autonomous driving) under Xin Chi Technology uses a 16nm process. This process level has fallen behind in consumer electronics, but in the automotive industry, the 16nm process is still a mainstream node.

Full Self-Driving Chip (FSD Chip, previously Autopilot Hardware 3.0) is an autonomous driving chip designed by Tesla and introduced in early 2019 for their own cars. Tesla claims the chip is aimed at autonomous levels 4 and 5. It's fabricated on Samsung's 14 nm process technology. The FSD Chip incorporates 3 quad-core Cortex-A72 clusters for a total of 12 CPUs operating at 2.2 GHz, a Mali G71 MP12 GPU operating 1 GHz, 2 neural processing units operating at 2 GHz, and various other hardware accelerators.

Tesla’s self-driving cars will be powered by a computer based on two of its new AI chips, each equipped with a CPU, GPU, and deep-learning accelerators. The computer delivers 144 TOPS, enabling it to collect data from a range of surround cameras, radars and ultrasonics and power deep neural network algorithms.

Table 1 shows a list of companies, their chip versions (current and planned), and TOPS for the chips. According to our report entitled “Hot ICs: A Market Analysis of Artificial Intelligence ("AI"), 5G, CMOS Image Sensors, and Memory Chips,” the Nvidia Orin chip has a single computing power of 200 TOPS, which has exceeded EyeQ5 computing power by 9X. The Horizon Journey 5 and Huawei's Ascend 610 both surpass EyeQ5. 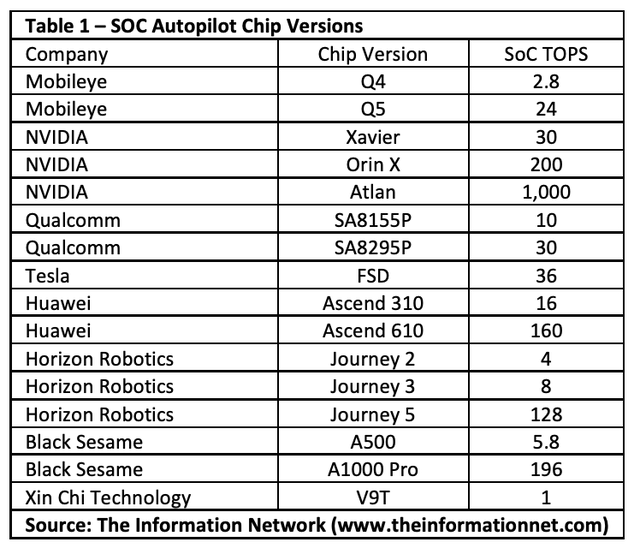 ADAS is defined by one of the following six feature levels (L0-L5):

I expect that from 2019 to 2030, the ADAS to L3 penetration rate of China's self-owned brand passenger cars will increase from 20% to 75%. That will mean the chip market size will increase from about $50 million to more than $1.5 billion.

Chinese independent brands also will use domestically produced in-vehicle chips in the same way that Chinese vehicles have experienced a smaller impact from the semiconductor “shortage,” as I discussed in previous Seeking Alpha articles.

According to our report entitled “Global and China EV Batteries and Materials: Technology, Trends, and Market Forecasts,” China is the largest market for passenger vehicles and the second largest country in terms of EV penetration. Table 2 shows that Europe overtook China in 2020 with EV penetration, as the U.S. plans to stick with ICD vehicles.

The strong demand in China is important for Mobileye and competitors, since Huawei and Chinese startups will make a dent in Mobileye’s market lead. As stated above, China's Horizon Robotics partners with leading OEMs, including SAIC, Great Wall Motor, JAC, Li Auto, Changan Automobile and BYD – all in China.

Intel announced in Dec. 7, 2021, that the company is planning to publicly list shares in its Mobileye self-driving car unit. Frankly, this is not “a day that will live in infamy” moment.

Autonomous driving technology is still in the early stage of development, and it's far from reaching the mature stage. This has enabled a lot of competition in the automotive autopilot chip market, with time to establish partnerships with auto companies, something Mobileye has been doing for a number of years. While Mobileye shipped 19.3 million SOCs, Horizon shipped nearly half a million.

Mobileye and self-driving cars are not CEO Gelsinger's strategic directions for Intel. The later the IPO, the more headwinds Mobileye will face, along with the spectre of a lower IPO valuation

So this spinoff is a great decision by Intel, because Intel is in the "CHIP" business and the company will use the IPO money to build new fabs. Besides, STMicroelectronics designs and TSMC makes the EyeQ chips anyway, which won’t affect Intel’s goal of recovering from the recent down years of lost CPU share to AMD (AMD).

This free article presents my analysis of this semiconductor sector. A more detailed analysis is available on my Marketplace newsletter site Semiconductor Deep Dive. You can learn more about it here and start a risk free 2 week trial now.