SoFi's (NASDAQ:SOFI) bulls know they have two major catalysts to look forward to next year; the banking charter and the end of the student loan moratorium. The latter saw a pause on federal student loan payments and temporarily set the loan interest rate to 0%. In my last SoFi article, I flagged the potential extension of this as a salient risk shareholders need to be aware of. Not anymore. The White House has now categorically ruled out an extension and confirmed that repayments will begin from the start of February. Albeit with some comments on a "smooth transition" to repayments which will likely soften revenue recognition in the initial months.

SoFi was founded in 2011 by four Stanford Graduate School of Business students who wanted to provide a more affordable option to classmates taking on expensive debt to fund their education. Hence, student loan refinancing remains a significant part of the overall revenue mix even as the company's business operations have since been developed to include other types of lending, financial services, and Galileo. 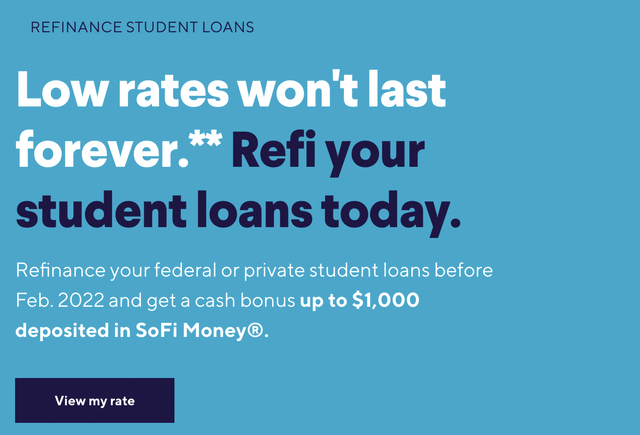 The impact of the extension of the moratorium on fiscal 2021 revenue was pronounced. This saw the company forfeit $52 million in SLR volume on the back of the CARES Act extension. This business was doing over $2 billion of student loan volume a quarter before the pandemic hit. The student loan business has been at less than 50% as lenders took on a more laid back approach to paying back their student loans since the initial moratorium was enacted via an executive order in March 2020.

Hence, and for the first time in almost two years, SoFi should have a significant tailwind in 2022 with SLR volumes picking up to aggregate with momentum in personal loan volume and its more competitive home loan product. The company expects its lending business to grow by about 25% annually over the next five fiscal years until 2026. Financial services is also expected to realize growth of about 150% annually until 2026 with Galileo seeing a 50% annual growth over the same time period.

The bank charter is the next phase of SoFi's growth as it would have a material effect on every facet of SoFi's businesses from SoFi Money and all their lending lines. Why?

It's The Margins, Stupid

At the core, owning a bank charter would allow SoFi to use their deposits, primarily from SoFi Money, to fund their own loans. Only banks are allowed to take FDIC-insured deposits from the public and have access to deposits as a source of funding. This would see the company replace its current comparatively costly financing agreements in place with a patchwork of third-party institutions. Operating as a chartered bank would provide access to the payments system operated by the Federal Reserve and access to wholesale funding such as the Federal Reserve discount window, Federal Home Loan Bank advances, and the federal funds market.

Further, in some jurisdictions, corporate entities permitted to act as a trustee is sometimes limited to just banks and trust companies. Essentially, SoFi's customer deposits will be used as a reservoir of funds that can then be drawn on to make loans. This will have a double pronged effect of allowing SoFi to offer more competitive loan rates whilst reducing their cost of capital. It would reverberate across the company's one-stop platform model by simultaneously making all their services more competitive. This would help to extend the current multi-product platform moat and contribute heavily to the bullish story. The recent weakness in the company's stock price now means this salient catalyst is not at all priced in. The impact over the next five years on underlying revenue growth and profitability will be significant. It would help drive the company's 5-year plan to reach at least 10 million members as it builds out its value add for its core demographic of US households with annual income of $100,000 or more.

From being the sole retail distributor of the Rivian IPO and the pending banking charter, SoFi is taking the steps necessary to differentiate itself and build out a moat to dominate the expected decade-long growth of digital financial products. The company has also raised a further $95 million from the cash redemption of its outstanding warrants, simplifying its share structure.

What Makes A Great Company And A Good Investment?

Companies with a pertinent ability to grow their revenues while proportionally increasing profits have always performed well. It's positive to see SoFi taking the steps to secure long-term revenue growth runway and underlying profitability. It's two catalysts are salient as they would place SoFi on a path to compete even better in the fields it currently operates in. Hence, with just 9 trading days left of this year left, the end of year-tax loss selling short sell trade looks set to finally taper out. J.P. Morgan's Kolanovic notes that the selloff is likely due for a reversal.

Bulls should not be complacent though as the broader economy could weaken if high inflation remains persistent and rising interest rates dampens consumer demand materially. I remain long and continue to buy on this weakness.

Leo Imasuen
5.15K Followers
The equity market is an incredibly powerful mechanism as daily fluctuations in price get aggregated to incredible wealth creation or destruction over the long term. These two polarising forces lay at the core of my stock coverage. The aim is to avoid wealth destruction and embrace wealth creation. I primarily focus on sustainable companies, growth stocks, and deSPACs.
Follow

Disclosure: I/we have a beneficial long position in the shares of SOFI either through stock ownership, options, or other derivatives. I wrote this article myself, and it expresses my own opinions. I am not receiving compensation for it (other than from Seeking Alpha). I have no business relationship with any company whose stock is mentioned in this article.