It’s been about seven months since I last looked at Ames National (NASDAQ:ATLO), a small regional bank in Iowa. I thought the bank was flying under the radar and was charmed by the relatively low premium to its tangible book value and its earnings profile as Ames was trading at just around 10 times the anticipated earnings. Despite this, Ames is now trading at a lower valuation than back in May, so I wanted to check up on the bank to make sure my original investment thesis is still valid as the increased dividend yield is making the stock even more attractive.

The total net non-interest expenses of Ames came in at $6.2M, which is again slightly lower than in the third quarter of last year as Ames has been able to reduce the total staff expenses. This resulted in an increase of the pre-tax and pre-loan loss provision income from $7.66M to $8.43M. An excellent result, and thanks to the bank’s ability to recoup some previously recorded loan-loss provisions, the net income increased by about 20% from $5.67M to $6.7M. 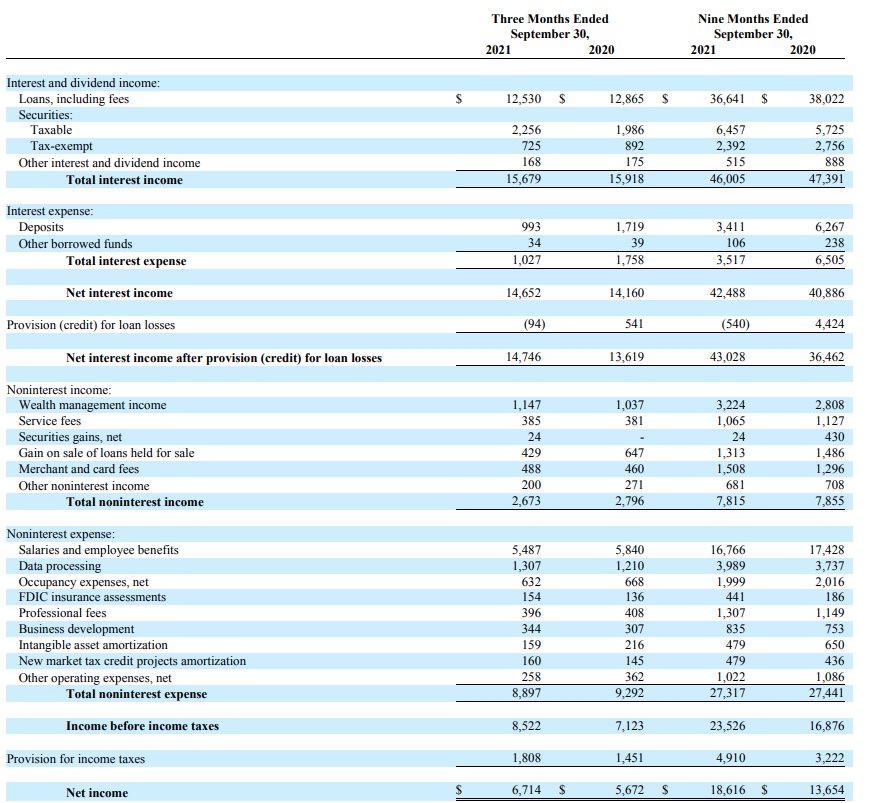 This resulted in an EPS of $0.74 for the third quarter, pushing the 9M 2021 results higher by almost 40% to $2.04 per share. That’s great but keep in mind this included the $0.54M in recouped loan loss provisions during the first three quarters of the year.

Don’t be fooled by the ‘$0.52 dividend per share declared’ during the third quarter. While two quarterly dividends were effectively declared during the quarter (on July 15 and August 17 th), the payment dates were respectively August and November, so Ames really just announced the dividend payable during Q4 earlier than usual and the annualized dividend payout remains at $1.04/share for a dividend yield of 4.37% based on Monday’s closing price of $23.79 per share.

The balance sheet looks robust, and the book value continues to increase

Ames is a relatively small bank and with a market capitalization of just over $200M and a total balance sheet size of less than $2.1B, we need to keep an eye on the safety of the balance sheet. Fortunately the asset side seems to be very liquid. Not only is the company quite cash-rich with $26M in cash and $123M in interest-bearing deposits (representing about 7% of the balance sheet total), I am very pleased to see the bank having invested about $765M in securities.

Source: SEC filings, the asset side of the balance sheet

That’s a nice increase compared to the situation as of the end of 2020 and this basically means Ames has invested the entire amount of increase deposits in these securities which are safer than the loan book as the majority of these securities is backed by the US government.

In the May article, I wasn’t very sure about Ames’ exposure to real estate related loans, but I was satisfied less than 0.5% of the loan book was classified as past due.

The loan book hasn’t changed much in the past few quarters as the loan book is still heavily geared towards real estate projects with CRE loans representing almost half the loan book.

There isn’t any reason to be concerned yet as the total amount of loans past due has actually decreased in the past six months. As of the end of September, only $3.5M of the $1.14B loan book was classified as past due.

As Ames National has a payout ratio of less than 40%, I think the bank will easily be able to hike its dividend again in 2022. The past few years, Ames has been able to increase its quarterly cent by one cent and I think it is safe to assume we will see another one cent hike to $0.27 per quarter. This will boost the dividend yield to in excess of 4.5% going forward.

In May, I was charmed by the bank’s attractive valuation of 10X earnings and 1.2X TBV. It’s now looking like the P/E ratio is dropping below 9 while the bank is trading at just around than 1.1 times its tangible book value of $21.47 per share. I still don’t have a position in Ames National, but I like the current valuation and dividend yield.

The Investment Doctor
16.83K Followers
Author of European Small-Cap Ideas
We zoom in on capital gains and dividend income in European small-caps
As I'm a long-term investor, I'll highlight some stockpicks which will have a 5-7 year investment horizon. As I strongly believe a portfolio should consist of a mixture of dividend-paying stocks and growth stocks, my articles will reflect my thoughts on this mixture.