Well, it finally happened. Bluerock Residential growth REIT (NYSE:BRG) was bought out by Blackstone for $3.6B valuing it at $24.25 per share. In addition to the $24.25 in cash, shareholders will get the spinoff of the single family rental business which will be listed under the ticker BHOM.

Prior to the Acquisition, the Company separately intends to spin off its single-family rental business to its shareholders (the "Spin-Off" and together with the Acquisition, the "Transaction") through the taxable distribution to shareholders of all of the outstanding shares of common stock of a newly formed real estate investment trust named Bluerock Homes Trust, Inc. ("BHOM"), which will be externally managed by an affiliate of Bluerock Real Estate. BHOM will own interests in approximately 3,400 homes, including 2,000 through preferred/mezzanine investments, located in fast growing, high quality of life and knowledge economy markets across the United States. The Company's shareholders will receive shares of BHOM, with a current implied Net Asset Value estimated at $5.60

This deal was a long time coming with great properties and the stock trading at such a discount to asset value. In fact, back in June I wrote:

BRG is arguably a top candidate for a buyout as a well-capitalized buyer could fix the burdensome capital stack overnight. If something like a Blackstone comes in with its low cost of capital that entire preferred stack could be redeemed at par (takeover clause provisions allow this) and replaced with a cost of capital around 3%.

The reduced cost would make the purchase immediately higher cash flow than BRG is operating at as a standalone and then the acquirer would be left with a beautiful property portfolio.

Congrats on the big gain to those who owned BRG. The question now becomes how to take advantage of this M&A wave going forward.

I see two potential pathways in which to do this:

Given the estimated NAV of $5.60 for spin-co, it would appear there might be value there, but quite a bit is still unknown as of right now. To fully assess that, I would want to know capital structure, forward FFO, the terms of the management contract and a whole slew of other information.

Until that becomes available, my efforts will go toward finding the next buyout target in multifamily.

The next M&A takeover target in multifamily

Let us begin with a look at the price to net asset value (P/NAV) of each of the multifamily REITs. 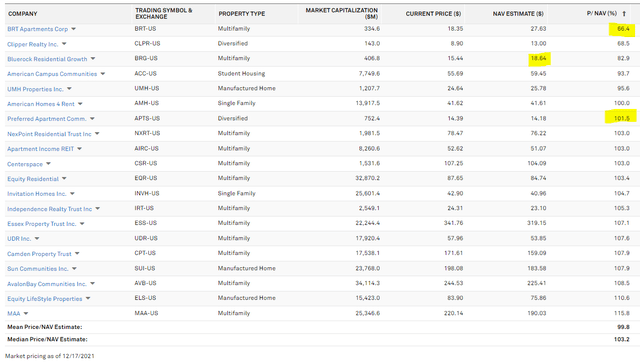 I have highlighted 3 pieces of information of note on the table above.

Perhaps most important among them is that the consensus NAV estimate for BRG was $18.64, and yet they were bought out for $24.25 plus the value of BHOM.

Blackstone is a highly sophisticated buyer with access to every valuation technique under the sun, so I’m willing to bet they are right about the value being so far above the consensus NAV. We recently highlighted consensus NAVs being far too low for REITs here.

This is relevant because it means the other multifamily REITs are likely worth far more than their NAVs due to the combination of NOI growth and cap rate compression that has recently occurred.

Clipper Realty (CLPR) is trading at just 68% of NAV, but I don’t see it as a likely buyout candidate as it is located in NYC. Most of the private equity appetite for apartments seems to be focused on the sunbelt.

BRT Apartments (BRT) is also trading at less than 70% of NAV, but the discount to true NAV is probably much larger. APTS appears to be trading near NAV, but if we use an appropriate cap rate, the discount is sizable. We will examine each opportunity in greater detail below.

The market seems to also see the growing possibility of buyout spreading to other multifamily REITs with APTS and BRT trading up substantially along with BRG.

I suspect the reason APTS’ stock price is responding so much is because of the stark similarities it has with BRG, specifically with regard to the capital structure.

Much like BRG, APTS has a great property portfolio but is drowning in expensive preferreds that are preventing the true cashflows of these properties from making it through to shareholders.

Such a large portion of cashflow is going to paying the roughly $57 million of preferred dividends quarterly.

Just as Blackstone’s purchase of BRG replaced the expensive preferreds with cheaper capital, a buyout of APTS could do the same.

Thus, while the valuation of APTS is not all that appealing as a stand-alone company, the cashflow yield to shareholders would be improved dramatically in a buyout.

An additional aspect of the mountain of preferreds is that it makes APTS highly levered and while leverage is traditionally considered a negative, it does amplify changes in cap rates.

Given that BRG was sold at a cap rate south of 4.5%, there is at least some potential for APTS to be bought at a massive premium to market price.

However, since APTS is not pure-play multifamily and does have a significant amount of grocery anchored retail, I would say fair cap rate is probably just over 5% setting asset value at about $20.

Thus, APTS is a risky, but potentially lucrative play.

It could reasonably be bought out at a substantial premium to market price, but as a stand-alone company its prospects are underwhelming.

Just last week I was speculating on Portfolio Income Solutions that BRT’s NAV was off because the $27.63 consensus NAV is using a cap rate of 5.43%. I suggested that instead it should be valued at a 4.75% cap rate based on the then prevalent comps in similar submarkets. This would take the NAV to $31.60.

Given the BRG news, however, it would seem the NAV might be even higher.

Blackstone’s purchase price of BRG represents a cap rate somewhere around 4.0%-4.5% after attributing value to the spin-co.

As it turns out, BRT and BRG own properties in similar markets which is evident when we overlay their portfolios on a map.

Both companies share significant exposure to the Texas Triangle, Charlotte, Nashville, and Atlanta. These are great submarkets and evidently where institutions want to own multifamily assets.

In addition to the BRG news, there was a report from Redfin suggesting that average apartment rents were up 7% in November, taking rents up to a 21% year to date increase. This report may have been partially responsible for BRT’s 6% rise against an otherwise down market.

I like BRT as a potential buyout and also like it as a going forward stand-alone company. It is well managed and rapidly growing earnings.

Given that BRT is likely participating in the general apartment rate increases of November, growth may come in even higher than previously anticipated.

How I’m playing the next buyout potential

APTS is an extremely viable buyout candidate with the ability to wipe out that preferred expense making it lucrative to a private equity buyer with a low cost of capital. As such, I would estimate it is the most likely next in line target.

However, given the challenges the company faces as a stand-alone entity due to the burden of the preferred dividend, it would be a speculative investment. Great if there is a buyout, but a bit shaky if there is not.

I try to capture as many angles of winning as possible.

BRT strikes me as a more well-rounded investment. It too has a great portfolio trading at a massive discount to NAV, so it could get bought by private equity. The difference here is that BRT does not need M&A. It is strongly cashflow positive and rapidly growing FFO/share just through its daily operations.

I am happy to own it as is and look at a potential buyout as mere icing on the cake.

Dividends are scarce, we provide the solution

For everything you need to build a growing stream of dividend income, please consider joining Portfolio Income Solutions. As a member you will get:

You will benefit from our team’s decades of collective experience in REIT investing. On Portfolio Income Solutions, we don’t only share our ideas, we also discuss best trading practices and help you become a better investor.

Disclosure: I/we have a beneficial long position in the shares of BRT either through stock ownership, options, or other derivatives. I wrote this article myself, and it expresses my own opinions. I am not receiving compensation for it (other than from Seeking Alpha). I have no business relationship with any company whose stock is mentioned in this article.

Additional disclosure: Important Notes and Disclosure
All articles are published and provided as an information source for investors capable of making their own investment decisions. None of the information offered should be construed to be advice or a recommendation that any particular security, portfolio of securities, transaction, or investment strategy is suitable for any specific person.
The information offered is impersonal and not tailored to the investment needs of any specific person. Readers should verify all claims and do their own due diligence before investing in any securities, including those mentioned in the article. NEVER make an investment decision based solely on the information provided in our articles.
It should not be assumed that any of the securities transactions or holdings discussed were profitable or will prove to be profitable. Past Performance does not guarantee future results. Investing in publicly held securities is speculative and involves risk, including the possible loss of principal. Historical returns should not be used as the primary basis for investment decisions.
Commentary may contain forward looking statements which are by definition uncertain. Actual results may differ materially from our forecasts or estimations, and 2MCSC and its affiliates cannot be held liable for the use of and reliance upon the opinions, estimates, forecasts, and findings in this article.
S&P Global Market Intelligence LLC. Contains copyrighted material distributed under license from S&P
2nd Market Capital Services Corporation(2MCSC) provides investment research and consulting services to the financial services industry and the financial media. 2MCSC does not provide investment advice. 2MCSC is a separate entity but related under common ownership to 2nd Market Capital Advisory Corporation (2MCAC), a Wisconsin registered investment advisor. Dane Bowler is an investment advisor representative of 2nd Market Capital Advisory Corporation.