Ubisoft (OTCPK:UBSFY) is a French video games developer which is one of the largest in the world according to revenue. The company was founded in 1986 by the Guillemot family, all five brothers of Guillemot are in the Board of directors, one of them (Yves Guillemot) is CEO, the Guillemot family holds the highest stake of near 16% with 20% voting rights (as a result of France's Florange Law, under which companies that have held their shares in registered form for at least two years are granted double voting rights). Ubisoft is developing a number of gaming franchises with long history and large fun base:

Such track record is achieved by more than 18,000 employees in studios in more than 20 countries, mostly concentrated in France, Canada, Spain and Germany.

Main peers of Ubisoft are:

In comparison with main peers UBI has: 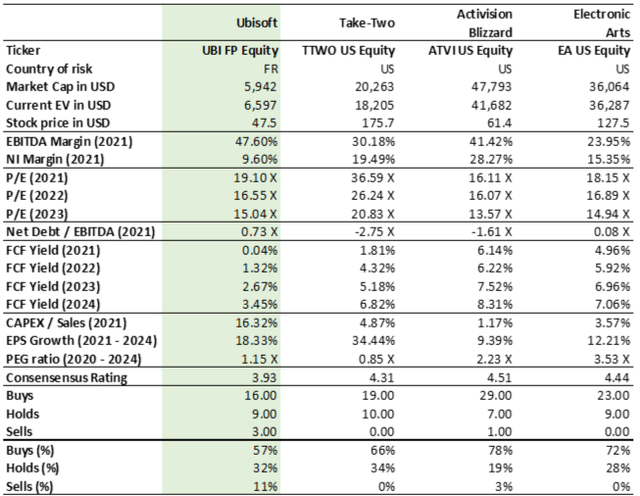 At the same time, UBI's forward P/E is comparable with peers' multiples, which means that if UBI is taken over by a strategic investor and the operating and financial indicators are pulled out in comparison with competitors, it will be possible to release substantial value. Ubisoft can be an interesting target for acquisition due to its professional team, strong brand and reasonable valuation. The Company is mired in reputation issues, therefore, sentiment around the Company is negative, but problems with governance can be solved by buying and optimization. Optimization can be achieved by eliminating reputational discount, reducing duplicate functions, a more commercialized approach to game development, and retaining talented developers. 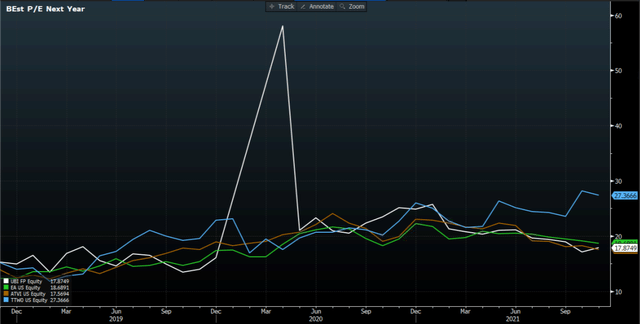 Ubisoft has been a potential takeover target twice: by EA and by Vivendi.

In December 2004 Electronic Arts Inc., the world's largest video game publisher, purchased 19.9% of Ubisoft from Talpa Beheer BV, the investment company controlled by Dutch billionaire John de Mol, for $90 mln. Since Ubisoft had not been contacted by EA about the purchase, Ubisoft viewed it as a hostile takeover. EA said it had decided to invest in Ubisoft after being informed by Talpa Beheer that he was looking to sell his stake. EA said it had held discussions with Ubisoft's management, but would not be seeking representation on its board.

EA viewed investments solely as financial without a desire to influence the operational management of the company. But the purchase, which made EA one of the largest shareholders of Ubisoft, fueled speculation that EA might be eyeing a bid for the entire company. Ubisoft chairman Yves Guillemot has declared that the company is "not for sale" - but declined to entirely rule out the possibility of a takeover by publishing giant Electronic Arts. "We are not safe from a hostile action from Electronic Arts, which it would be difficult to block if they make a genuinely interesting offer", said Guillemot.

EA didn't develop takeover and didn't inject member to the Board of directors. EA sold off its stake by 2010. "Our strategic priorities have changed since our initial investment," Electronic Arts said in a statement. "More recently, the Ubisoft position has been viewed as a portfolio holding, rather than a strategic holding," the San Francisco-based company said. EA bought Ubisoft for 5 EUR/share and sold for 6.75 EUR/share (according to UBS estimation), therefore implied return is equal 35% for 6 years or 5% annually.

In July 2013, Vivendi (the French media conglomerate controlled by French billionaire Vincent Bolloré) sold its 85 percent stake in Activision Blizzard for more than $8 billion, with the corporation claiming at the time that it wanted to focus on the TV and music portions of its business. There were some signs of tension within the executive circle of the company.

In October 2015 Vivendi has returned to the games business by purchasing shares in two publishers: 6.6% stake in Ubisoft for 140 million euros, and spent an additional 20 million euros to acquire a 6.2% holding in Gameloft. Gameloft publishes mobile games and was founded by Michael Guillemot, who is also co-founder of Ubisoft.

In February 2016 Vivendi pushed its stake in Gameloft above 30%, that is the threshold above which companies are required to make a full takeover offer according to French law. After several takeover bids and significant premium Gameloft's board approved bid and Vivendi acquired Gameloft in June 2016.

The Guillemots worked with financial advisers to build a defense plan against a potential Ubisoft takeover attempt from Vivendi. Yves Guillemot stated that Ubisoft will "fight to preserve our independence" and described Vivendi's investment in the company as unwanted. "Our intention is and has always been to remain independent, a value which, for 30 years, has allowed us to innovate, take risks, create beloved franchises for players around the world, and which has helped the company grow into the leader it is today," he said.

By April 2016, Vivendi increased its ownership in Ubisoft to 17.7% (or 15.7% of voting rights). The founders owned just 9% of shares and hold 16% of the voting rights. Despite increasing its shares in Ubisoft, Vivendi stated it had "no plans" to attempt an Ubisoft takeover. But the company said that its 18 percent stake in Ubisoft means it deserves representation at board level.

In June 2016 Yves Guillemot stated Ubisoft open to a merger - but not with Vivendi. "We have Plan A and Plan B," said Yves Guillemot. "Plan A is to remain independent. Plan B is going with another group, either in the game industry or with a technology or other types of company. Those are the two options at this point and they are both still open."

In November 2017 Vivendi, which controlled 26% stake, stated that it won't attempt a takeover of Ubisoft for at least the next six months. In the meantime, Ubisoft announced share buyback program for up to 10% of shares of the company with aim to try and stop Vivendi's ever-growing share of the publisher from increasing further.

In March 2018 Vivendi, which had been raising its holding in Ubisoft, has agreed to sell its 27.3 percent stake in the company for $2.45 billion (EUR 2 billion). Vivendi purchased its Ubisoft shares for a total of EUR 750 million within 2015-2018, and this exit has netted it a huge profit. Tencent Holdings Ltd, which dominates China's mobile gaming market, invested almost EUR 370 million for 5% stake, while the Ontario Teachers' Pension Plan spent EUR 250 million for 3.4% stake. Along with the investments from Tencent and Ontario Teachers, the deal also includes a share buy-back by Ubisoft that adds up to 8.1% stake, as well as a share purchase by Guillemot Brothers SE (near 3% stake) and institutional investors acquired the remainder of Vivendi's shares. Guillemot and co fought hard to fend Vivendi off and ultimately, with the help of a number of companies including China's Tencent, managed to buy Vivendi out. The firm sold the last of its Ubisoft shares (5.9%) in March 2019. "Vivendi is no longer an Ubisoft shareholder and maintains its commitment to refrain from purchasing Ubisoft shares for a period of five years," Vivendi said in a statement.

Incidentally, Activision Blizzard was also helped by none other than China's Tencent to achieve its independence.

Despite a long history of video games, modern video games market is developing dynamically, doubling from 2012 to 2019 (it should be noted that gaming industry is bigger than movies and music businesses combined). Amid a series of lockdowns in 2020, consumption of video games reached record value of $178 bln globally (growth rate 23% relative to 2019). According to NewZoo research, it is not predicted a reiteration of such growth rates in the future, but it is expected that by 2023 market value will exceed $200 bln. 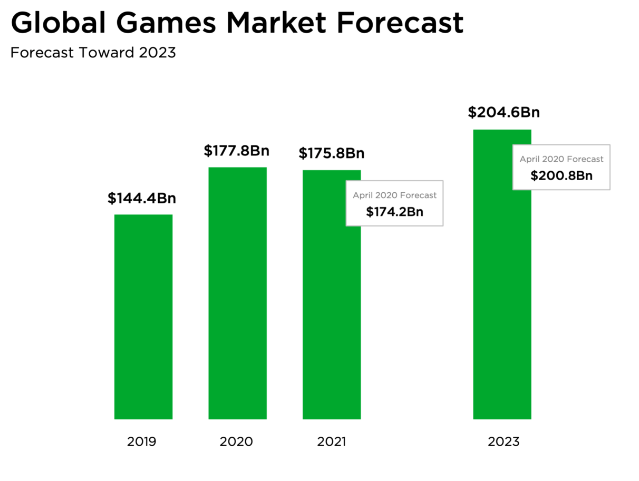 In context of active market growth and corresponding prospects for activities in this market, M&A transactions are actively being carried out. Transactions are carried out for various purposes: diversification of activities (large companies enter the video games market through acquisitions of existing companies, individual studios, or create in-house teams from scratch), horizontal acquisitions to gain experience and expertise in new genres or types of games, transnational acquisitions for entering a new market.

Given attractive valuation of Ubisoft, the ability to extract value through optimization of activities and broad expertise of the Company, Ubisoft can be considered a target for any of the possible types of M&A. At the same time, history of unsuccessful takeover attempts by Ubisoft suggests that takeover must necessarily be friendly and complimentary in terms of the type of activity of a potential buyer. The current management and the largest shareholder in person of the Guillemot brothers are sensitive to development of the company after a potential merger. As Yves Guillemot said during the saga with Vivendi, the company is ready to consider possible acquisitions, but with companies that understand video game business, or with technology companies for which video game market will not be alien.

As far as size of the largest M&A deals can be judged, current market capitalization (without possible premium for potential deal) of 100% of Ubisoft is comparable with size of deals that took place in 2016 and 2020. 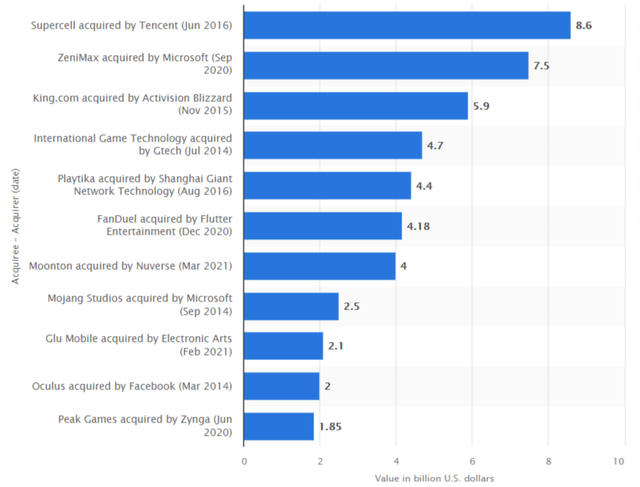 Acquisition of Ubisoft could potentially be of interest to the largest companies in the market (Tencent, Activision Blizzard or Electronic Arts) to increase their market share and strengthen their positions in video game market. Ubisoft may also be of interest to such large technology companies as Alphabet, Microsoft, Meta, Amazon, Netflix, Disney to increase their market presence, or Meta Platforms to develop metaverse space.

Lighthouse Research
533 Followers
We are research team that covers wide spectrum of financial assets in USA, Europe and across emerging markets. We primarily focus on short-to-medium duration bonds and event-driven equity strategies.Recently, our team decided to publish some of our Fixed Income/Event-Driven investment insights here on Seeking Alpha. Our goal is to represent ourselves to different kind of investors as well as attract attention of larger financial institutions for future cooperation.We are committed to provide you only the best ideas, insights and analysis.We also welcome your feedback on our investment insights as well as your own ideas!Feel free to subscribe to our channel and use our knowledge and experience for making return on your own investments. Welcome to LHC Management consultancies!Disclaimer: please note that provided views and materials cannot be classified as investment recommendations from legal point of view. Provided insights must not be used on their own for making investment decisions. Investors are recommended to do their own research and consult with their broker(s)/investment advisor(s) prior to making a trade. Investing in financial assets always poses a risk of capital loss.