Ethereum (ETH-USD) continues its long road towards Ethereum 2.0, with new ideas and potential updates popping up in recent weeks. In this article, I review the latest news and make the argument that Ethereum could potentially be left in the dust. There are two key reasons for this. Firstly, the idea that the Ethereum blockchain is not in fact as decentralized as other cryptocurrencies, like Bitcoin. Secondly, many superior alternatives exist today, especially when it comes to DeFi applications.

The Latest on Ethereum

For some time now, plans have been laid out as to how Ethereum will increase scalability and reduce gas fees, namely, by transitioning to a PoS system, amongst other things. However, the task is proving harder than anticipated.

On December 6th, Ethereum underwent the “Arrow Glacier” update, which pushes back the date of the difficulty bomb until June 2022. As it stands now, miners are still enjoying the mining rewards of a PoW system, but this will have to end eventually when the network changes completely to a PoS system. This is where the difficulty bomb and subsequent “ice age” come in. In the meantime, Ethereum has now become by some measures the most profitable cryptocurrency to mine.

In other news, the Ethereum creator Vitalik Buterin recently released his vision for Ethereum 2.0’s “endgame” The proposals aim to improve scalability and privacy issues. To do this, Buterin proposes a second staking tier, that can allow for staking using fewer resources.

The transactions in a block are split into 100 buckets, with a Merkle or Verkle tree state root after each bucket. Each second-tier staker gets randomly assigned to one of the buckets. A block is only accepted when at least 2/3 of the validators assigned to each bucket sign off on it.

Buterin aims to split up the production and validation process. Validation can happen more efficiently since there is no need for validators to keep a complete record of the entire blockchain. 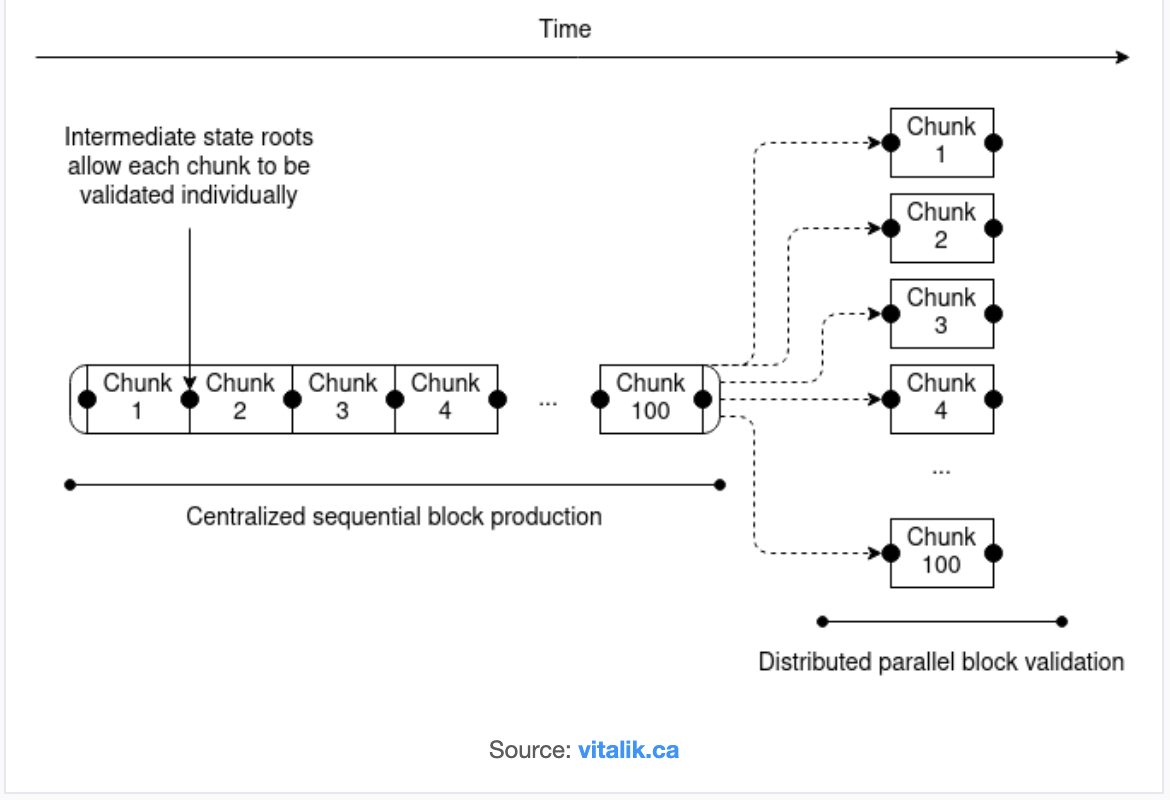 This process should also improve censorship resistance. What Buterin is addressing here is how to ultimately scale Ethereum while maintaining an acceptable level of decentralization. This doesn’t have immediate implications, but it gives us a lot to think about.

This is ultimately the question that needs answering, and it is a key differentiator between Bitcoin and Ethereum. Decentralization is a key component of cryptocurrencies, but in many ways, Ethereum is sacrificing its essence in order to make itself more scalable. The transition to PoS eliminates the need for miners and puts all the power in the hands of the stakers. While some contingencies have been laid out, such as fines for malicious behaviour, centralization in Ethereum production seems inevitable under this model.

Another big false claim to centralization comes when we talk about DeFi, which has been the main driver for increased Ethereum usage in the last year. DeFi often relies on Decentralized Exchanges, DEXs, which allow users to freely exchange and stake coins. Though these exchanges may be decentralized in terms of day-to-day operations, their governance is another matter altogether. Evidence suggests that Uniswap insiders control over 40% of the voting power.

Lastly, we could also apply a similar argument to tokens such as Wrapped Bitcoin (WBTC) and Stablecoins, which account for a large part of the liquidity in Ethereum financing pools. Stablecoins, in particular, are centrally controlled, and they are susceptible to all the problems that come with this.

For both DEXs and centrally controlled tokens/stablecoins, this opens up the door to regulation, something which we have seen governments push for in recent weeks. Ultimately, this makes Ethereum a lot more fragile than some might perceive, and that doesn’t even account for the competition.

Ethereum has a very important promise to fulfill with the upgrade to Ethereum 2.0, and time is against it. The time bomb for cutting the mining reward continues to be pushed back. Who’s to say this won’t happen again? And how long can Ethereum keep doing this before people lose confidence in the network? Meanwhile, there are plenty of reliable alternatives out there that promise to carry us into the third wave of DeFi.

Cardano (ADA-USD), is one such example. Cardano has now launched Ardana, its own decentralized DeFi Hub, and they also plan to launch dUSD, their USD stablecoin. I previously compared Cardano and Ethereum in this article.

Another contender to the throne is Polkadot (DOT-USD), which has Acala, an Ethereum compatible DeFi Hub that allows for further scalability and faster transactions.

And lastly, we have Solana, (SOL-USD) which has already made great strides in the NFT world. Solana recently launched Atani which acts as an aggregator for all decentralized exchanges. Solana has established partnerships with major exchanges and has superior technical specs to Ethereum.

With that said, I must say that I still own a substantial amount of Ethereum in my crypto portfolio, but I am reconsidering shifting some towards other cryptocurrencies. Ethereum still has the upper hand, and perhaps the ability for large holders to gain control of the network will support institutional support. However, there are inherent problems that Ethereum continues to not address, with better options out there. While I believe Bitcoin’s position as a store of value is well cemented, Ethereum’s place as an enabler of DeFi and the Internet 3.0 remains a question mark. Consider this before investing.

The Digital Trend
15.95K Followers
Author of Technically Crypto
In-depth analysis on Bitcoin, Altcoins and the technology that powers them.

Disclosure: I/we have a beneficial long position in the shares of ETH-USD either through stock ownership, options, or other derivatives. I wrote this article myself, and it expresses my own opinions. I am not receiving compensation for it (other than from Seeking Alpha). I have no business relationship with any company whose stock is mentioned in this article.