Enel Chile (NYSE:ENIC) has been one of our worst-performing investments. The PPA margin effects moving negatively with the CLP and the price of copper meant our investment was positioned badly for the commodities boom and the continued renewable push. Moreover, the political situation in Chile, increasingly socialist, put a further discount on a company that we thought was already too beaten down. Now, another phenomenon hits ENIC, admittedly a much less predictable one, which is the weather. ENIC depends highly on hydropower, and the driest season in years has meant terrible results where the only way to compensate the grid would be with LNG purchases, now at record prices. We think that the situation cannot possibly get worse for ENIC. The company will probably benefit long-term for a Chilean commodities boom thanks to PPA sales, and the hydrology situation must recover. Political risks at that point would remain, but we don't believe that further deterioration is likely for ENIC given how accommodating they've been with the government as it is, and the need for a competent operator in a changing Chile. When prices fall, so does risk, we think the risk-reward has shifted at this point on balance into a favourable territory.

The current Q3 demonstrates many of the dynamics of the ENIC business. The first thing to comment on is the generation mix. 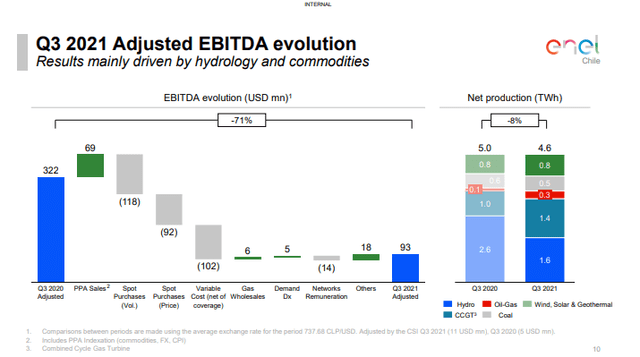 Hydropower is typically the biggest generation contributor, but CCGT is the second. When the droughts meant hits to the hydro generation, where hydro generation fell by almost 40%, CCGT had to pick up the pace in order for ENIC, the main generator in Chile, to supply the grid with the power it needed. Ordinarily, this isn't such an issue, except for when, as we happen to be now, are in a situation where commodities are in exceptionally short supply. Minimal supply of gas from Argentina meant that the company had to import LNG massively in order to power their generators and provide the grid with electricity. The massive volume of very high price imports of LNG accounts for almost all of the massive 71% decline in EBITDA that we have seen for the Q3 results YoY. 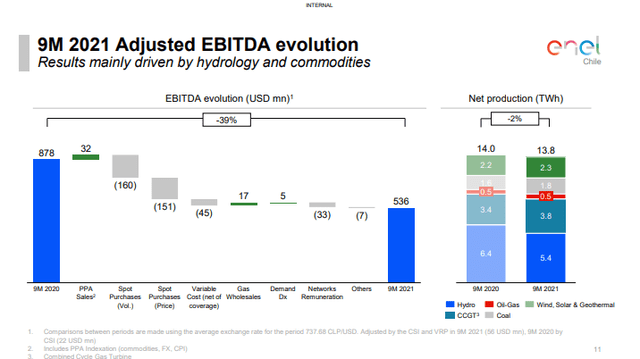 The magnitude of the effects is similarly pronounced in the YTD figures, with almost all of the 39% YoY decline accounted for by those commodity inflation effects.

On a more positive note, BHP (BHP) and Anglo American (OTCQX:NGLOY) became customers of ENIC in a major agreement that resulted in new PPA sales. This is a welcome offset because we saw negative PPA margin effects up until this quarter that were quite substantial at around $60 million. Net of these effects, we have seen an increase in the value of the PPA portfolio, which assuages our fears about the positioning of ENIC with respect to commodity prices and the Chilean pesos, which posed an unfavourable margin threat for ENIC given the renewable trends supporting copper, the commodity price environment, and the connection between the level of the CLP in correlation with Chile's main export of copper.

The performance is awful, and we're glad that our investment was only 2% of our portfolio at cost because we're quite underwater. We think that, while driven by climate change, the mega-drought we're seeing cannot possibly remain at these acute levels in 2022. Moreover, the issue with copper prices and the CLP has been stabilized as well, with the booming mining industry likely a net positive for ENIC as more mines develop in Chile that will require substantial energy supply.

However, regarding the hydropower situation, there are some unfortunate correlates with the overall political situation in Chile. With the drought, water access has been troublesome, and this is a rallying call for many of the people that voted for the new socialist government expecting reform. While energy generation is obviously very important for the country, the government might sacrifice ENIC's profitability at the altar of popular reform, requiring them to continue to focus on CCGT generation, or otherwise pivot to other means of renewable generation. It could be a dangerous vice that investors might find themselves in, and it's the only risk at these levels that could prolong the situation of highly depressed margins. This would be the reason for investors to consider selling at this point, as indeed we are, despite losses.

Valkyrie Trading Society
2.91K Followers
Author of The Value Lab
A long-only voice with eclipsing growth through 2020 and 2022 bear markets.

Disclosure: I/we have a beneficial long position in the shares of ENIC either through stock ownership, options, or other derivatives. I wrote this article myself, and it expresses my own opinions. I am not receiving compensation for it (other than from Seeking Alpha). I have no business relationship with any company whose stock is mentioned in this article.