This article was first released to Systematic Income subscribers and free trials on Dec. 18.

In this article, we take a look at a number of CEF ideas we like in the market right now. In our view, it's worth considering marginal allocations currently for three reasons. First, the majority of tax-loss selling pressure should be behind us, judging by the performance of the likely tax-loss selling candidates over the last few days such as the PIMCO Corporate & Income Opportunity Fund (PTY) or the OFS Credit Co. (OCCI) despite a fairly tepid overall market.

Secondly, discounts have come off the boil somewhat, particularly in credit CEFs, although they remain relatively expensive over the last decade. 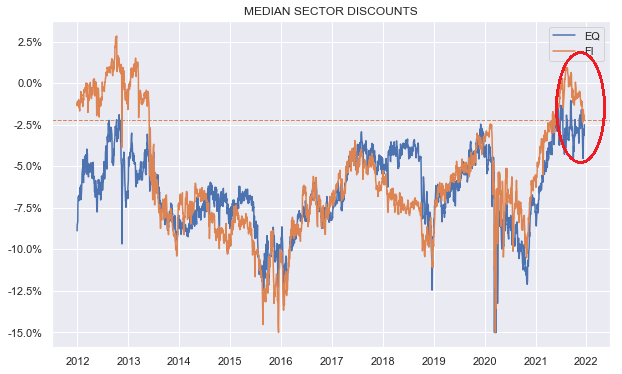 Thirdly, the CEF market has a clear January effect as the following chart suggests with discounts tending to rally out of the gate. 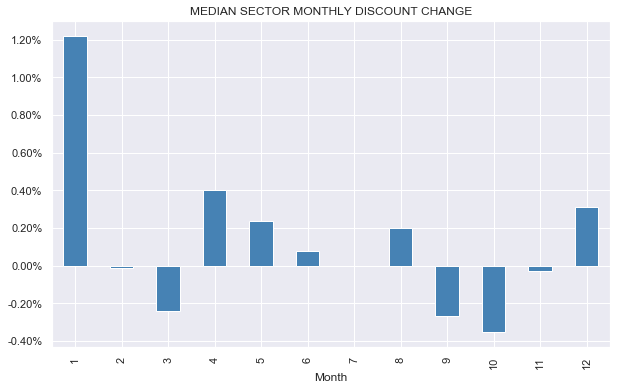 Our starting point for highlighting opportunities is the following chart which provides a valuation and quality screen for the broader CEF market. 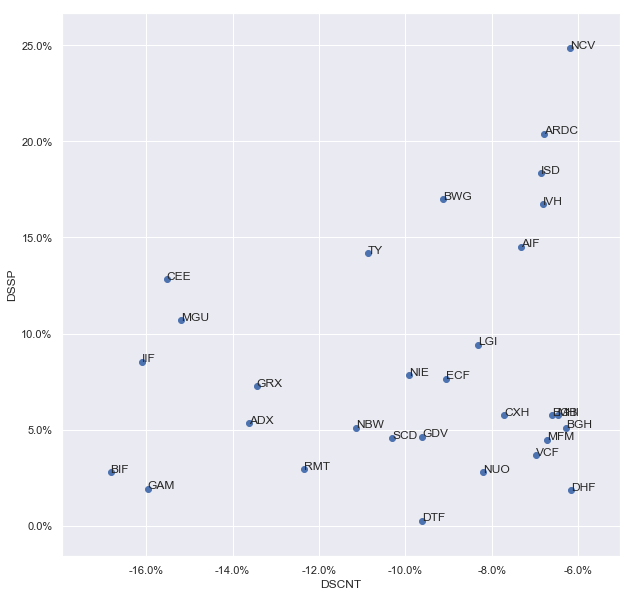 The valuation screen is composed of two metrics:

The quality screen relates to a number of other metrics such as historic NAV performance, risk and yield metrics and others. The screen selects only the top-scoring funds in each sector. The idea here is to filter out funds that are value traps, i.e., those that trade at attractive valuations but do so for a reason as they are relatively poor stewards of investor capital.

Funds that we would highlight in this selection are the following in the order of riskier holdings to less risky holdings.

The Barings Global Short Duration High Yield Fund (BGH) trades at a 7.57% current yield and a 6.3% discount with coverage of around 126%. The fund features one of the lower quality allocations in the CEF space with a 40% allocation to credits rated CCC and below as well as a fairly cyclical tilt with a quarter of the portfolio in energy and mining below.

This one is very much for investors who are either constructive on the macro picture in the medium term or prefer a barbell allocation that combines higher-quality with lower-quality allocations. The fund features a duration of 2.2 which is an attractive feature given the asymmetric risk to interest rates.

The fund has been a strong performer in the limited duration sector. 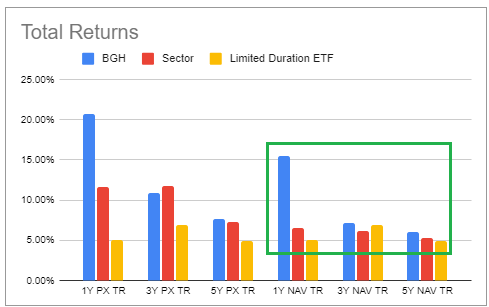 And looks attractive on valuation grounds relative to the broader sector.

The Ares Dynamic Credit Allocation Fund (ARDC) allocates to high-yield corporate bonds, loans, CLO debt and CLO equity in order of allocation percentage. The fund trades at a 6.8% discount and a 7.61% current yield with coverage at around 99%.

The fund has delivered sector-beating performance over various time horizons in NAV terms, though some of this is due to the fact that it also holds HY corporate bonds which have historically outperformed loans. 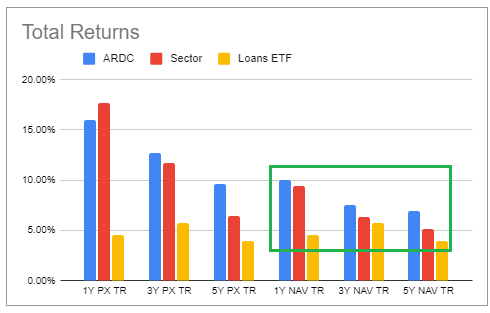 We also like the fund due to its allocation to CLO debt, particularly BB-rated tranches which continue to trade at attractive yields. 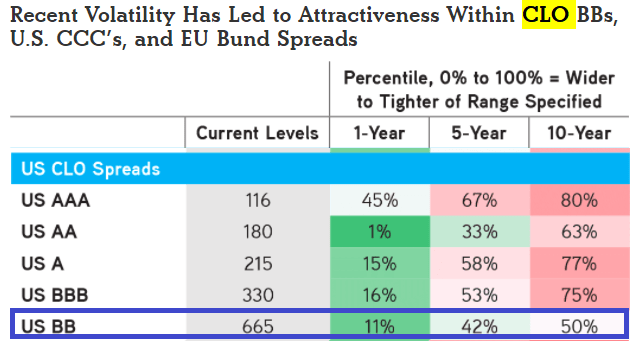 The fund has beaten the sector over 3 and 5 years though it has lagged over the past year. 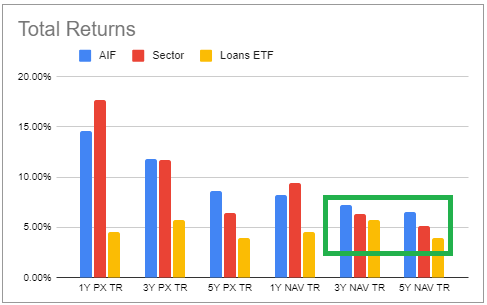 The fund's discount has recently widened more than the broader sector which makes it look attractive once again.

The MFS Investment Grade Municipal Trust (CXH) allocates to primarily investment-grade tax-exempt bonds. The fund is overweight health facilities and hospitals with a 32% portfolio weight and features duration of about 9. CXH trades at a 7.7% discount and a 3.99% current yield. The fund has made a few trims to its distribution which is something MFS likes to do with their funds. Current coverage is about 106%.

The fund has roughly matched the sector's performance over the last 5 years in total NAV terms though it has lagged more recently, likely owing to its higher-quality allocation relative to the sector. 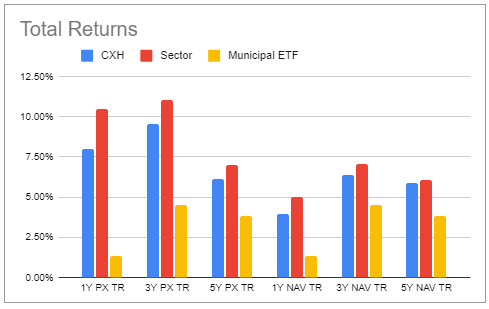 CXH has tended to trade at a wider discount relative to the sector and this differential has widened recently - likely a result of its distribution trims.

A few attractive funds were left out from our screen due to the fact that they don't have a sufficiently long track record to get a quality score. However, they are still worth a look in our view.

The Cohen & Steers Tax-Advantaged Preferred Securities & Income Fund (PTA) is a relatively new fund which has gotten itself into a negative tax-loss selling feedback loop and has underperformed the other two Cohen & Steers preferreds funds in price terms. However, if we look at the total NAV profile this year, it is actually slightly ahead of the other two funds this year. 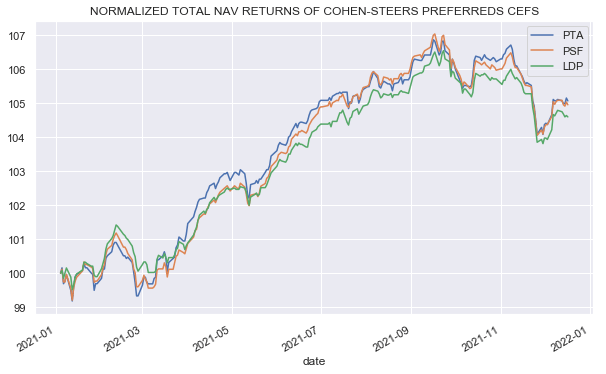 PTA, like most other preferreds CEFs, allocates primarily to investment-grade rated financial issuers (by senior unsecured rating). The rating profile of its preferreds holdings is about 60% in investment-grade and highest-rated high-yield rating (i.e., BB+). 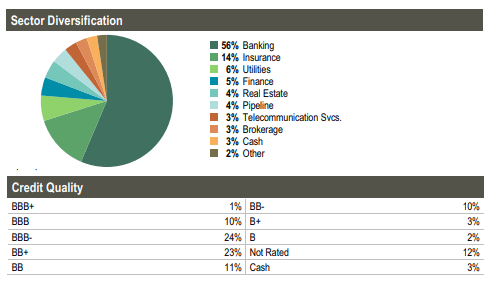 The fund trades at a 5.6% discount and a 6.51% current yield. The fund's discounts are well wider of the other two funds. In our view, this should converge somewhat over time since the fund, in effect, offers a very similar allocation. PTA does have a somewhat higher management fee, so we don't expect the discount to fully converge with the other two funds. 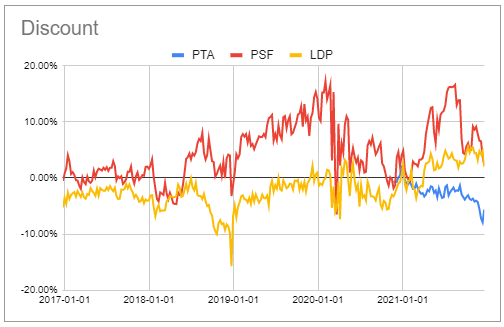 Finally, for fans of CLO Equity or more tactically-oriented investors, we currently like the OFS Credit Co. (OCCI) which is trading at a steep discount relative to the other two CLO Equity CEFs. 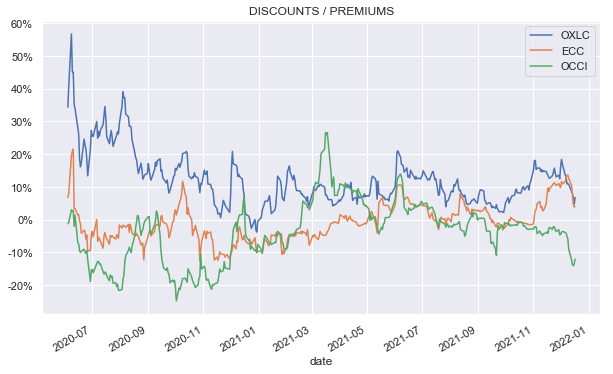 This chart shows the discount differential between OCCI and the average of the other two sector funds. 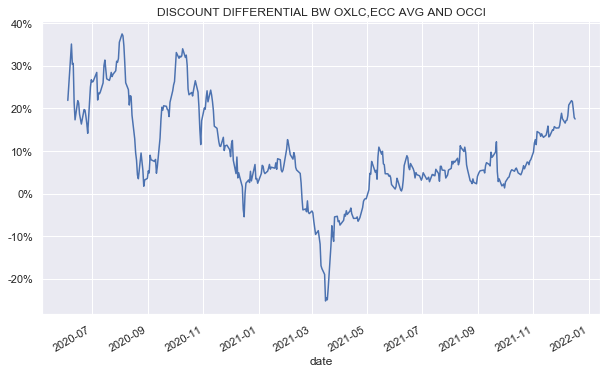 In our view, OCCI is not attractive as a longer-term core holding because its long-term total NAV performance is unimpressive. However, its current valuation is also unusually cheap versus the sector.

With the majority of tax-loss selling behind us and the January effect ahead of us, it looks like a decent time to consider either adding a marginal amount of risk (perhaps from accumulated distributions) or reshuffling the portfolio into attractively-priced funds with strong track records. More broadly, CEF valuations remain relatively expensive so investors should consider maintaining some amount of dry powder that is likely to be put to use as the Fed begins its likely lift-off in the middle of next year.

Disclosure: I/we have a beneficial long position in the shares of AIF, ARDC either through stock ownership, options, or other derivatives. I wrote this article myself, and it expresses my own opinions. I am not receiving compensation for it (other than from Seeking Alpha). I have no business relationship with any company whose stock is mentioned in this article.