The year 2021 is almost over, and it is time to review the performance of the companies included in the list of "Top 5 Mining Stocks To Watch In 2021". The performances were really good. Although they were lower compared to the 2020 list, this time, all of the companies ended in green numbers, with an average return of 29.97%.

During the time period between December 28, 2020, and December 26, 2021, the highest gains were recorded by Freeport-McMoRan (FCX). The share price of the copper mining major grew by nearly 67%. Also the second copper miner, Taseko Mines (TGB), did very well, recording nearly 53% gains. By the way, Taseko was also on the 2020 list and it recorded gains of 183%. Some solid returns were recorded by gold producers Victoria Gold (OTCPK:VITFF) and Karora Resources (OTCQX:KRRGF). Their share prices increased by 16% and 12% respectively. Shares of Adriatic Metals (OTCPK:ADMLF) grew only by 2.27%. However, at one point, they were nearly 40% up.

Adriatic Metal's share price stood at $1.76 as of December 28, 2020, and it grew to $1.8 by December 26, 2021. Although the growth is tiny, many positive things occurred during the year. First of all, the final permits for the Vares silver project were obtained. Also the definitive feasibility study for the project was completed. It presented some very good numbers, with an after-tax NPV (8%) of nearly $1 billion (my detailed article about the feasibility study can be found here). Subsequently, the financing package for Vares was presented. It consists of a $120 million senior secured debt, a $22.5 million copper stream, and $102 million equity financing (my detailed article about the Vares mine financing can be found here). Moreover, very good drill results kept on coming from the Serbian Raska project, as well as from Rupice (Vares). The latest drill results including 24.7 meters grading 514 g/t of silver equivalent, or 7.1 meters grading 1,123 g/t of silver equivalent were released only on December 6. 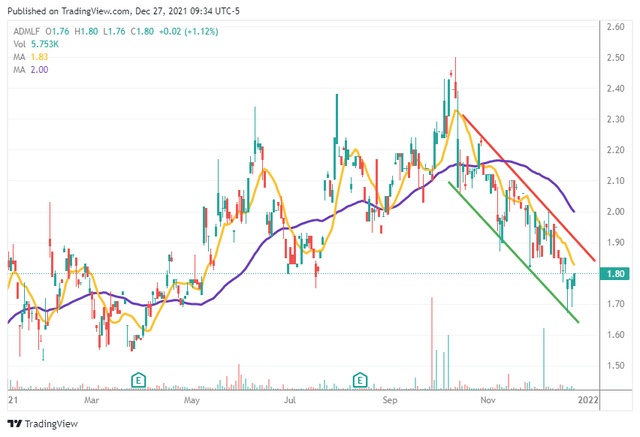 All the positive developments elevated Adriatic's share price to the $2.5 level by the middle of October. But after reaching this point, the share price started declining. This was initially caused by the financing package that was slightly less favorable than expected. And subsequently, the political crisis in Bosnia started weighing on the share price. However, if one believes that the crisis can be resolved without any excessive violence, Adriatic offers significant upside potential.

The most important news is the organic growth plan that should elevate the annual production volumes to 200,000 toz gold by 2024. The growth should be financed by cash flows generated by the current operations. Moreover, the plan looks quite conservative, as it doesn't take into account some of the newly discovered zones of gold and nickel mineralization (my detailed article about the growth plan can be found here).

And of course, there were lots of great drill results. Worth mentioning are especially 19 g/t gold over 9 meters intersected at the Larkin Zone, 21.1 g/t gold over 3 meters intersected at Lake Cowan, or 1.5 g/t gold over 90 meters, intersected 250 meters to the west of the Larkin Zone. Moreover, Karora discovered a new high-grade nickel zone at the Beta Hunt mine. The best hole from the Gamma Zone - 50C intersected 11.6% nickel over 4.6 meters. To sum it up, new gold and nickel zones were discovered, and the already known zones have been expanded significantly. And the good news is far from over. The new updated resource estimate should be very interesting. Moreover, new drill results will keep on coming also throughout 2022. 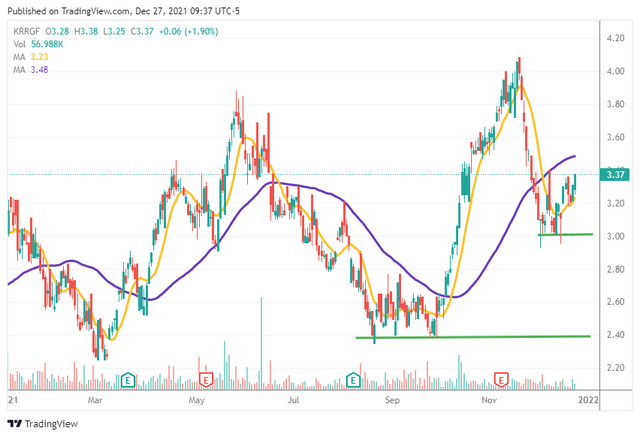 But Karora did well also operationally. Its production rates kept on growing and reached the level of 30,365 toz gold in Q3. The AISC declined to $967/toz. Karora recorded EPS of $0.05 and an operating cash flow of $22 million. The net debt stood at -$40.5 million as of the end of Q3. And the numbers are expected to keep on improving, as the milling capacity is expanded and some meaningful nickel production is started.

On December 28, 2020, Victoria Gold's shares closed the trading day at $9.37. By December 26, 2021, they grew to $10.83. However, as can be seen in the chart below, the first half of the year was much better for Victoria than the second half. The share price peaked at $18.5, on June 14. But the gold price weakness pushed it back to the $11 level. And the latest hit came only several weeks ago when Victoria revised down its 2021 production guidance by 10%, from 180,000 to 162,000 toz gold. The reason is that in Q4, the deliveries of driplines needed for irrigating the leach pads, were delayed by 5 weeks. However, this should be only a temporary delay and the delayed gold production should be realized in early 2022, boosting the Q1 2022 results. 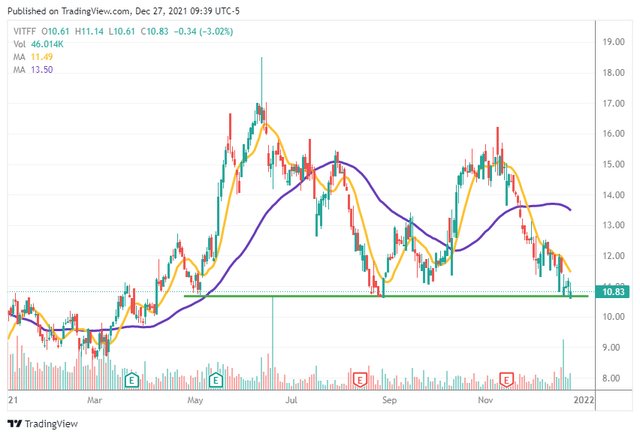 Although the chart doesn't look good and the share price will probably decline further in the near-term, the longer-term outlook looks good. Victoria confirmed that it is able to approach the designed capacity at the Eagle gold mine. The production guidance will be missed, but only due to some external reasons. Moreover, the company announced that it aims at growing the production to 250,000 toz gold per year, starting in 2023. This target should be met by scalping of fine ore from the crushing circuit and by the introduction of year-round stacking of ore to the heap leach pad.

Taseko's share price increased by more than 52%, from $1.31 to $1.99. However, at one point in May, the share price was above $2.6. It means more than 100% up year-to-date. The growth was fueled not only by positive company-related news but also by strong copper prices. The price of the red metal started the year at $3.6/lb, only to close it near $4.35/lb. The strong copper prices provided a nice boost to Taseko's financial results. During the first 3 quarters of 2021, Taseko generated an operating cash flow of $109.8 million, which is notably more than $63.2 million recorded during the same period of 2020, or $25.4 million recorded during the same period of 2019. 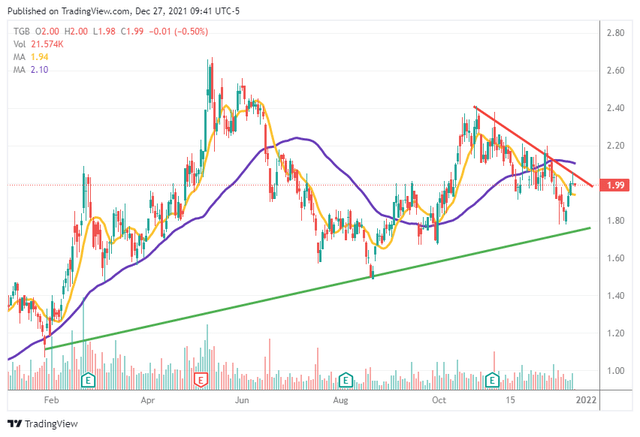 But the most important event of 2021 is the progress made at the Florence Project. It is almost fully permitted now, the initial draft of the Underground Injection Control Permit was issued on November 22. The construction activities should begin immediately after this final permit is obtained. Another good news is that Florence should be fully funded from internal cash flows and cash on hand ($191.1 million as of the end of Q3). Moreover, Taseko has also a revolving credit facility of $50 million at its disposal. It means that the $230 million Florence CAPEX is fully funded. Florence represents the future of Taseko, as it should be able to produce 85 million lb copper per year, at a C1 cash cost of only $0.9/lb, over the 21-year mine life. 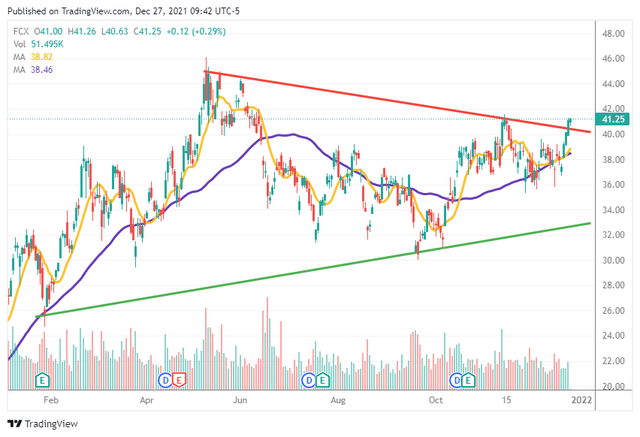 Would you like more investment ideas like the ones presented in this article? The Royalty & Streaming Corner is primarily focused on precious and industrial metals R&S companies, however, it includes also investment ideas from the broader mining space. Join today and enjoy a free trial!

Disclosure: I/we have a beneficial long position in the shares of ADMLF, KRRGF, TGB either through stock ownership, options, or other derivatives. I wrote this article myself, and it expresses my own opinions. I am not receiving compensation for it (other than from Seeking Alpha). I have no business relationship with any company whose stock is mentioned in this article.