You may find the 9.3% dividend yield from AGNC Investment Corp (NASDAQ:AGNC) attractive – for very good reasons. Just to name a few: first, we are in a secular interest rate environment, and the 10-year Treasury bond yields about 1.4%. Second, at the same time, inflation is surging. Depending on whose reports you are reading, it is in a range between 5.3% (Fed’s most recent report) to 7.8% (BofA Global Investment report). And finally, AGNC’s dividend coverage is at a very safe and comforting level by payout ratio. Its current dividend payout ratio is about 50% only, significantly below the historical average. It is indeed very safe in both absolute and relative terms.

However, you should be aware that its dividend yield is far below the historical average. It is actually near a record low in a decade. At the same time, you should be aware of the limitations of using the simple payout ratio to gauge dividend safety. When measured in dividend cushion ratio, a more comprehensive metric, its dividend safety is below the historical average. And lastly, you should also be aware of the implications of the Fed’s tapering and anticipated interest rate raises.

It is the purpose of this article to discuss the above questions in detail. So that you could make a more informed decision regarding this investment.

You may argue that the risk-free interest rates also decreased over the decade. The risk-free rates act as the gravity on all asset valuations. And when interest rates fall, the valuations for other assets such as AGNC just have to go up. So there is nothing abnormal about AGNC’s yield decrease - even if there is no profitability improvement at all.

In my view, part of the reason for this conservative move is to prepare for the anticipated Fed’s tapering and interest rate raises. We will discuss that later. Here we will first dissect the dividend safety and discuss the caveats of interpreting the payout ratio. 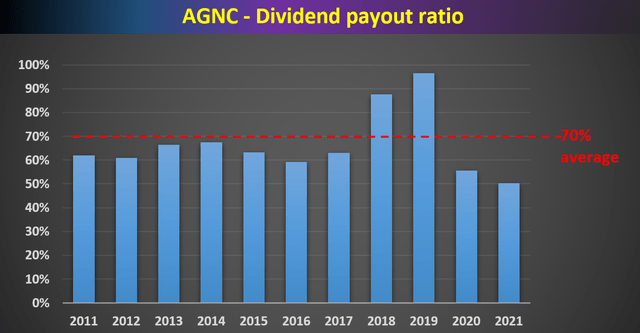 However, the simple payout ratio we commonly use ignores all these important pieces. For a more advanced analysis of dividends stocks, I recommend the so-called dividend cushion ratio. I found it an effective tool to gain a more comprehensive picture of dividend safety. A detailed description of the concept can be found in Brian M Nelson’s book entitled Value Trap. And a brief summary is quoted below:

The Dividend Cushion measure is a ratio that sums the existing net cash (total cash less total long-term debt) a company has on hand (on its balance sheet) plus its expected future free cash flows (cash from operations less all capital expenditures) over the next five years and divides that sum by future expected cash dividends (including expected growth in them, where applicable) over the same time period. If the ratio is significantly above 1, the company generally has sufficient financial capacity to pay out its expected future dividends, by our estimates. The higher the ratio, the better, all else equal.

With this background, the dividend cushion ratio for AGNC is calculated and shown in the following chart. Note that to suit the particular case of AGNC, my calculations A) used the cash from operations as the free cash flow, and B) obtained the net cash position by considering cash and equivalent, receivables, and payables. The analysis are shown in the table and also the chart below for more visual-oriented readers. 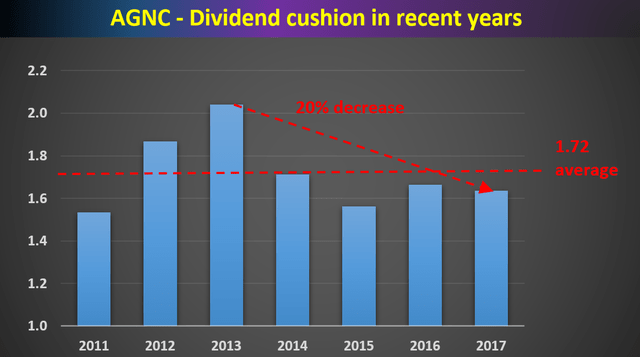 The major risk as I see is the interest rate risk.

Businesses like AGNC heavily depend on leveraging and are therefore sensitive to interest rate change. AGNC has been deleveraging in anticipation of the Federal Reserve’s tapering and interest rate raises. AGNC's leverage has been on average 8.5x in the past decade in terms of book value. And the leverage peaked around 11x during 2018 – a dangerously high level in my view. The business has significantly deleveraged from the peak to the current level of 7x – a reduction of more than 1/3. The current leverage is also significantly below the historical peak and at the lowest point in a decade. More details of its deleveraging can be found in my earlier article here.

However, despite the significant deleverage, higher interest rates are detrimental to AGNC (or mREIT in general). AGNC has been enjoying nearly 0% cost of fund (i.e., free access to funds) since mid of 2020 when the Fed started injecting a massive amount of liquidity to combat the pandemic and lower the Fed fund to near 0% level. As interest rates rise, the cost of funds will increase and the tailwinds that benefited AGNC will begin to reverse. Furthermore, the interest rates might increase faster and more than what the current dot-plot suggests.

If you are looking for income, you may be attracted to a 9.3% dividend yield from AGNC – for very good reasons. The yield is very appealing given the current low-interest-rate environment and beats even the higher end of inflation projection.

However, a closer examination reveals some reasons for reservation too. Given the mixed signals, I myself will stay on the sideline for now.

Specifically, the reasons for reservation analyzed in this article include: