The Toronto-based McEwen Mining (NYSE:MUX) released its third-quarter results on November 6, 2021. This article is an update of my article published on October 11, 2021.

McEwen Mining came out with a third-quarter loss of $17.40 million or $0.04 per diluted share. The loss is due to aggressive investment in the fleet, with $10.3 million spent on exploration and advanced projects.

Finally, production is on track to meet the company's 2021 guidance of 141K to 160.4K gold equivalent ounces. 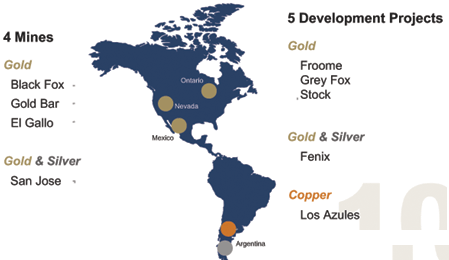 The gold equivalent production at the four producing mines is getting better. Below is the chart comparison for the 2Q21 and the recent 3Q21. The San Jose and Black fox mines are performing well. The residual leaching activities at El Gallo are expected to wind down in early 2022.

The investment thesis for McEwen Mining is not as straightforward as I would like it to be. The balance sheet looks mediocre with recurring losses and a record high AISC.

On the bright side, the company is increasing gold production significantly and should generate some free cash flow soon.

I do not think the company can be considered a reliable long-term investment yet. However, the price is now attractive, and MUX can be an excellent trading tool.

MUX is down nearly 10%. However, the stock performance has suffered a significant drop since June.

This is the second consecutive quarter, where our production has increased, and our production costs have decreased relative to last year. I am delighted to say that our Q3 was a good quarter. And year-to-date, we are looking far better than we did last year at this time. We are making good progress on our turnaround.

Note: Numbers are indicated in US$.

Note: On June 30, 2021, the Company filed Articles of Amendment to its Amended and Restated Articles of Incorporation with the Colorado Secretary of State, providing for an increase in its authorized capital to increase the number of shares of common stock that the Company can issue from 500,000,000 to 675,000,000. The Company's shareholders approved the Amendment at the annual meeting held on June 28, 2021.

McEwen Mining received 2.3 million in dividends 3Q21 from the San José mine.

Note: Generic free cash flow is the cash from operations minus CapEx. It may differ from the company calculation.

Production Details per mine:

The gold equivalent production from the company's operations is on track with the previously announced 2021 production guidance of 141,000 to 160,400 GEOs.

Production in Q3 2021, with 42,900 gold equivalent ounces or 41% higher than the same quarter last year. The increased production was attributed to operational improvements at the Gold Bar, Fox, and San José operations, which were in line with our expectations.

AISC is exceptionally high and is not enticing for a long-term investment. The average AISC of most of MUX's peers is under $1,000 per ounce. AISC at the San Jose mine was $1,466 per ounce, and the total AISC was $1,539 per ounce (100% owned operations).

According to the 10Q filing, on August 23, 2021, the Company announced that its subsidiary, McEwen Copper, closed the first tranche of Series B private placement offering. McEwen Copper issued 4,000,000 common shares for $10.00 per share for gross proceeds of $40.0 million.

An affiliate of Mr. McEwen purchased all the shares according to this first tranche. As of September 30, 2021, the affiliate holds 18.6% ownership of McEwen Copper.

As a result of the common shares issued, the Company's 100% ownership in McEwen Copper was reduced by 18.6%. Consequently, the Company recorded $14.9 million as non-controlling interests and $25.1 million as additional paid-in-capital.

Due to the current remote nature of losses, the liquidity of our private placement, some geopolitical concerns. And being at its preliminary economic assessment stage, Los Azules for the purpose of our financing is valued at $175 million, which is equal to $0.065 per copper equivalent pound. 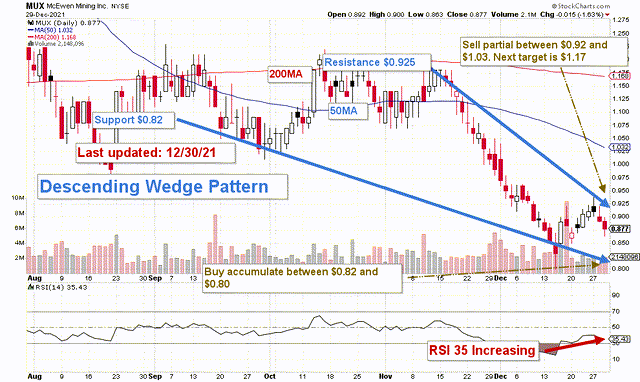 MUX forms a descending wedge pattern with resistance at $0.925 and ascending support at $0.82.

The trading strategy I suggest is selling LIFO about 65% of your position between $0.92 and $1.03. Also, accumulate on any weakness between $0.82 and $0.80. The strategy buy-sell-rinse-repeat is the best path right now.

If the gold price turns bullish the next few months, MUX will probably cross the resistance and retest the range of $1.15-$1.20, at which point it would be prudent to sell half your position.

However, the gold price is now trading in a narrow range between $1,750 and $1,825 per ounce. The FED may turn hawkish to fight rampant inflation, which is a negative for gold.

Conversely, if gold turns bearish and crosses $1,750 per ounce, I see MUX dropping below $0.75, where I could consider starting a small long-term position.

Warning: The TA chart must be updated frequently to be relevant. It is what I am doing in my stock tracker. The chart above has a possible validity of about a week. Remember, the TA chart is a tool only to help you adopt the right strategy. It is not a way to foresee the future. No one and nothing can.

Join my "Gold and Oil Corner" today, and discuss ideas and strategies freely in my private chat room. Click here to subscribe now.

You will have access to 57+ stocks at your fingertips with my exclusive Fun Trading's stock tracker. Do not be alone and enjoy an honest exchange with a veteran trader with more than thirty years of experience.

"It's not only moving that creates new starting points. Sometimes all it takes is a subtle shift in perspective," Kristin Armstrong.

Fun Trading has been writing since 2014, and you will have total access to his 1,988 articles and counting.

Fun Trading
20.47K Followers
Author of The Gold And Oil Corner
As an experienced investor, I will help you stay on task more efficiently.

Disclosure: I/we have no stock, option or similar derivative position in any of the companies mentioned, but may initiate a beneficial Long position through a purchase of the stock, or the purchase of call options or similar derivatives in MUX over the next 72 hours. I wrote this article myself, and it expresses my own opinions. I am not receiving compensation for it (other than from Seeking Alpha). I have no business relationship with any company whose stock is mentioned in this article.