I assign a Hold investment rating to General Electric Company (NYSE:GE). GE refers to itself as an "American multinational company" which is "a leader in Power, Renewable Energy, Aviation and Healthcare" industries on its corporate website.

I don't have a very favorable view of General Electric's long-term 10-year outlook. I have doubts regarding the value accretion (i.e. narrowing of conglomerate discount) associated with the company's split plans, and I am also concerned about GE's ability to fund the future growth initiatives of its Aviation business on a stand-alone basis.

On the flip side, GE's shares don't appear to be expensive, with its stock price below the lowest Wall Street analyst target price. In addition, a decrease in daily COVID-19 cases going forward could be a short-term catalyst for the stock.

As such, I decide to rate GE's shares as a Hold.

General Electric's shares have underperformed the S&P 500 by a significant margin in the past six months, but the sell-side analysts' consensus price target seems to indicate that there is meaningful upside for GE at current price levels.

In the last six months, GE's share price has decreased by -7.0%, while the S&P 500 was up by +8.7% in the same time frame. Specifically, General Electric's shares began underperforming the S&P 500 significantly since late-November 2021, and this coincided with the World Health Organization calling "the variant B.1.1.529 a variant of concern, named Omicron" and the rise in COVID-19 cases. General Electric's key Aviation business segment was negatively impacted by the coronavirus pandemic in 2020, with its revenue and operating profit down by -34% and -72%, respectively. As such, it is no surprise that GE's stock price has been weak with the recent spike in COVID-19 cases. 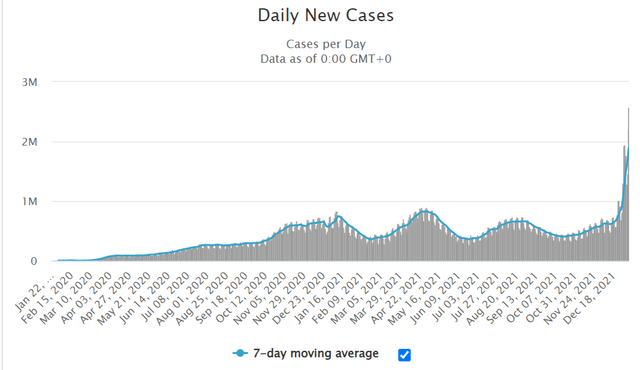 General Electric's shares appear to be poised for a rebound, based on an analysis of the stock's sell-side analyst price targets. The mean consensus target price for GE is $124.71, which is +25% higher than the company's last traded share price of $99.95 as of January 6, 2022. Furthermore, it is noteworthy that even the most bearish of Wall Street analysts covering the stock thinks that there is limited downside at current price levels for GE. The lowest price target for General Electric on the Street is $100.00, which is roughly where General Electric's shares are currently trading.

The Range Of Target Prices For Analysts Covering General Electric

Also, GE's consensus price target rose by +5% from $124.18 as of November 9, 2021 to $129.74 (the highest in three years) as of November 11, 2021, after it disclosed "plans to form three public companies" as per its press release published on November 9, 2021. General Electric's split plans are the most important factors affecting the stock's future potential price increase, which I address in the next section of this article.

Is GE Stock Expected to Rise?

GE's future share price performance in the medium to long term is going to be substantially influenced by whether its plans to separate itself into three listed entities create value.

In a nutshell, General Electric aims to transform itself into "an aviation-focused company" by spinning off its Healthcare business and Renewable Energy & Power business in 2023 and 2024, respectively, according to its November 9, 2021 media release.

An Overview Of General Electric's Split Plans Announced On November 9, 2021

I have a mixed view of GE's split plans.

On one hand, General Electric currently suffers from a sum-of-the-parts or conglomerate valuation discount as a single listed entity with multiple businesses, so the split of GE into three separately listed companies could potentially bring about a positive re-rating of GE's valuations in the future.

Furthermore, the Aviation, Healthcare and Renewable Energy & Power businesses are very different in many areas such as growth prospects, profitability, cash flow generation, asset intensity, and capital needs. As such, it does make sense to separate these businesses. 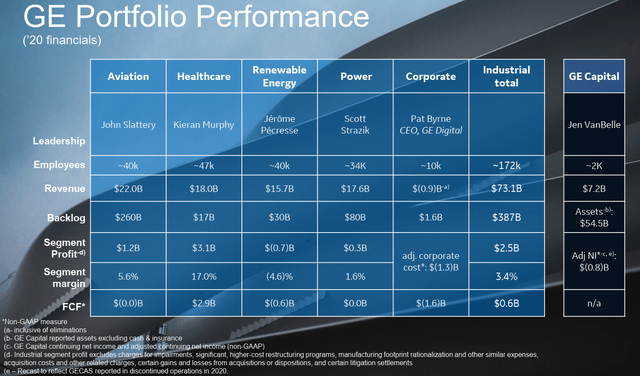 On the other hand, it is uncertain to what extent is the market willing to assign a narrower conglomerate discount to GE post-split. Although General Electric claims that it will become "an aviation-focused company" following the spin-offs in 2023 and 2024, it will still have interests in a number of non-aviation assets and businesses following the split.

At the company's investor call on November 9, 2021, General Electric mentioned that the company will keep its "other assets and liabilities of GE today, including our runoff Insurance business." It also added that it will still own "stakes at AerCap (AER) and Baker Hughes (BKR) as well as our stake in Healthcare, which we expect to be nearly 20%."

Notably, General Electric highlighted at the early-November call that the company's interests in AER, BKR and the healthcare businesses are "something that we will also monetize over time as we set the balance sheet for the three companies and position each of the three companies to be on their front feet, able to invest in growth going forward." This seems to indicate that it will take a much longer than the expected time for GE to really become more of a pure aviation play and reduce its sum-of-the-parts valuation discount to a larger extent.

It is also noteworthy that General Electric's share price performance has been poor in the last two months as highlighted in the preceding section, despite the split plans that were first announced in early-November 2021. This is partly due to the Omicron variant, and also might be partly attributable to skepticism about GE's split plans.

Going forward, I think GE's share price will rise in the short-term as this new wave of COVID-19 cases eases. But a substantial increase in General Electric's stock price may not be on the cards, as the company's split plans may not boost its valuations significantly as I explained earlier.

Where Will General Electric Stock Be In 10 Years?

The past 10 years have not been great for GE's shareholders in terms of the company's stock price performance vis-a-vis the S&P 500 as per the chart below, and there is no guarantee that the next decade will be substantially better.

GE's Stock Price Performance In The Past Decade

In the next decade, General Electric's split plans will matter the most for the first five years (2022-2026). In the latter five years (2027-2031), all eyes will be on GE's transition into more of a pure-play aviation company.

Also, assuming that the two spin-offs are delayed due to either capital market factors or internal considerations, the timeline for the potential divestments (highlighted in previous section) of GE's stakes in its healthcare business, AER and BKR might also be pushed back.

In the latter five years of the next decade, assuming that General Electric completes the spin-offs of the Healthcare and the Renewable Energy & Power businesses successfully, financing the future growth of the Aviation business will be the biggest challenge for GE.

An analyst questioned "the stability of funding" for the company's Aviation business in the longer term at General Electric's investor call on November 9, 2021, as he noted that "historically, GE funded Aviation from the rest of the company through the cycle." In response to this question, General Electric did not provide a specific answer as to how the company's Aviation business will be funding its future growth. Instead, GE stressed that "the (three) companies will all be public and have access to capital markets in a focused way."

In other words, General Electric used to support the Aviation business' new growth initiatives with cash flow from its other businesses. When the Aviation segment becomes a stand-alone company following its spin-offs, the business could become much more reliant on capital markets for financing, rather than relying on its internally generated cash flow from the company's other segments.

In conclusion, GE's 10-year outlook will be very dependent on the performance of financial markets and capital market conditions in the future, as this may affect the timing of its spin-offs and the growth of its Aviation business as I detailed above.

GE stock is not really a good long-term investment in my opinion.

In the near-term, General Electric's shares could possibly rebound if there are signs of improvement in the COVID-19 situation. But the long-term outlook for GE is uncertain. The split plans might not help to narrow GE's sum-of-the-parts or conglomerate discount to the extent that it hoped for; while the Aviation business could be faced with financing hurdles without the support of the company's other businesses that will be spun off. Considering these factors, I view General Electric as a Hold.