The job report on Friday, January 7, was an absolute blow-out, and if you only saw the headline non-farm payroll number, then you missed all the data that mattered. The unemployment rate fell to 3.9%, while the U6 measure of unemployment fell to 7.3%.

These unemployment rates are a historically very low reading, and the last time unemployment rates were this low was before the pandemic. What's worse is that these numbers are typically at the low end of the range and suggest the unemployment level may only improve marginally from here and typically preceded a recession. But more importantly, interest rates were much higher, which means the Fed is now very far behind the curve. 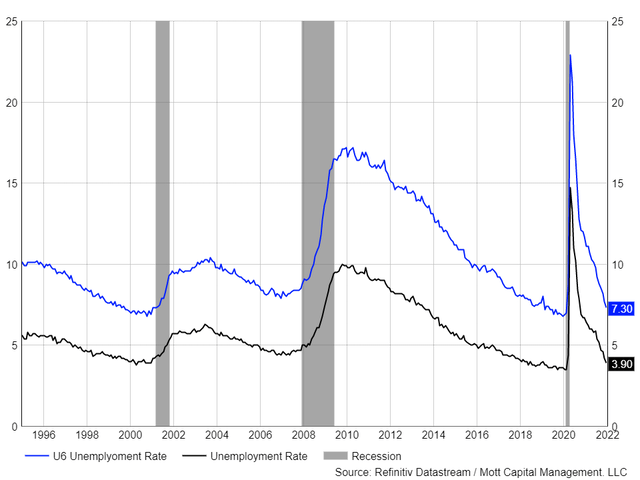 That means the Fed will now be raising rates at peak employment and economic growth. In reality, the time for them to raise rates has passed. Ending QE, raising rates, and running off the balance sheet will be more than the economy and the markets can handle. It will be a huge mistake.

The household data was robust, showing that 651,000 jobs were created in December, while 483,000 people came off unemployment and another 60,000 re-entered the workforce. It's on top of the population growing by 107,000. The non-farm payroll results from the establishment survey rose by just 199,000, missing expectations of 400,000. But this non-farm payroll number seems to be losing a lot of importance in this new economy, which allows many people to work for themselves.

The last time the U6 measure of unemployment was at 7.3% was in late 2018. The Federal Funds rate was at 2.4%, not its current 0.08%. CPI was also well under 3%. So to say that the Fed is behind on the curve may be a massive understatement. 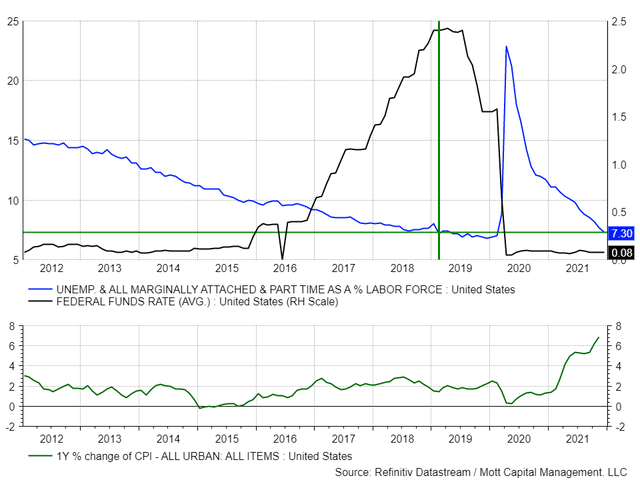 Bond yields initially jumped on the news, with the two-year yield rising to nearly 90 bps but has settled down to around 86 bps. The two-year rate is too low currently and needs to increase dramatically if the Fed is genuinely this far behind the curve. The last time the U6 unemployment rate was this low, the 2-yr yielded almost 2.5%. Meanwhile, the 5-yr TIP had a rate of about 70 bps, not -1.35%. Albeit again with a much lower reading on the consumer price index. 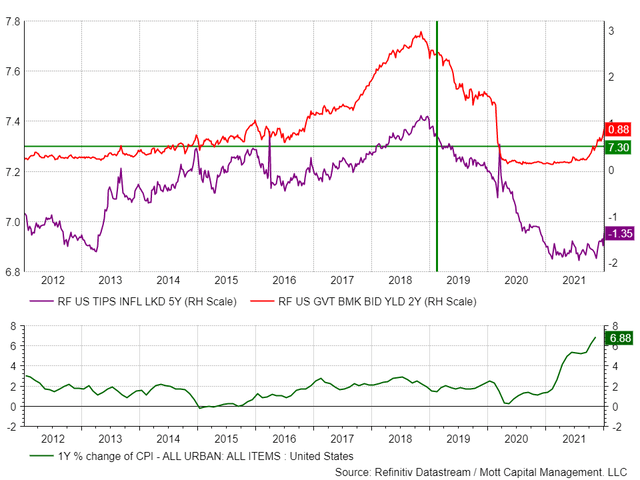 Inflation May Be Cooling

It seems that rates will need to rise aggressively from here, but only the short end of the curve. I think that is less likely to happen on the longer end of the yield curve. The market will realize that an overly aggressive Fed tightening monetary policy at the wrong time will raise the risk of the Fed over tightening and causing a recession. That is why 10-Yr rates have risen so slowly in recent weeks following very high inflation reports. NEXT WEEK, the CPI report will likely show that the pace of inflation cooled in December.

The ISM manufacturing survey showed that prices paid in December fell sharply, 14.2 points. That was the most significant decline since October 2011. That would suggest that the CPI also fell sharply in December, as the two tend to move in the same direction. Currently, a Reuters poll shows that estimates are for the CPI to climb in December to 7% from 6.8% in November. A weaker than expected CPI may push rates on the longer end of the yield curve lower, resulting in further yield curve flattening. 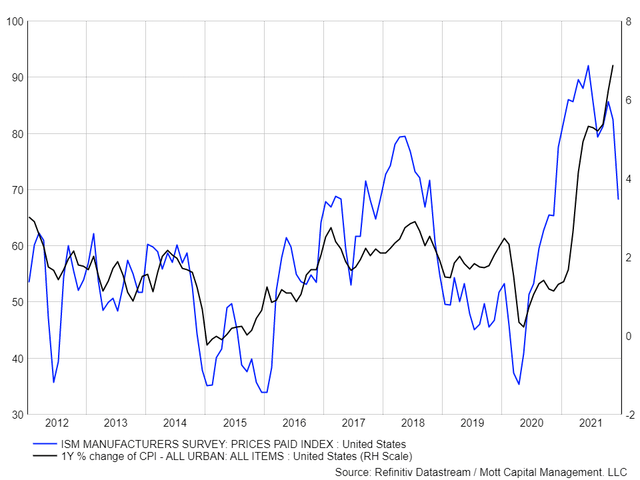 Additionally, the year-over-year change in the velocity of the M2 money supply has cooled, which would also suggest that CPI rates are likely to be heading lower in the months to come. The further the velocity of money slows, the more inflation should cool. 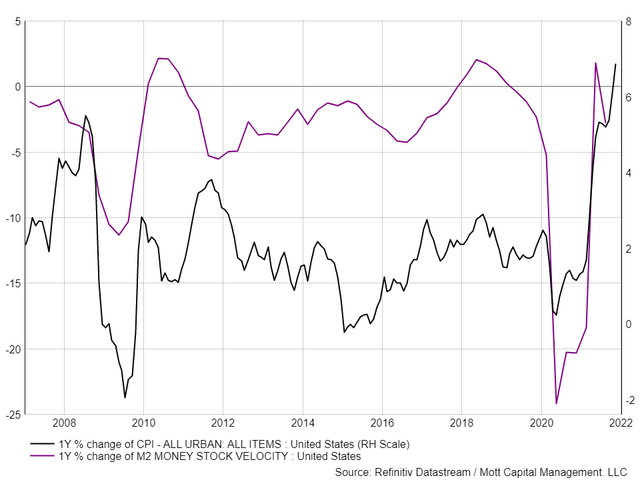 Expectations for inflation to cool are probably why 10-year rates have not risen nearly as aggressively as 2-year rates. It's also probably why the yield curve has been flattening now for months and why it will only continue to flatten in the weeks to come. 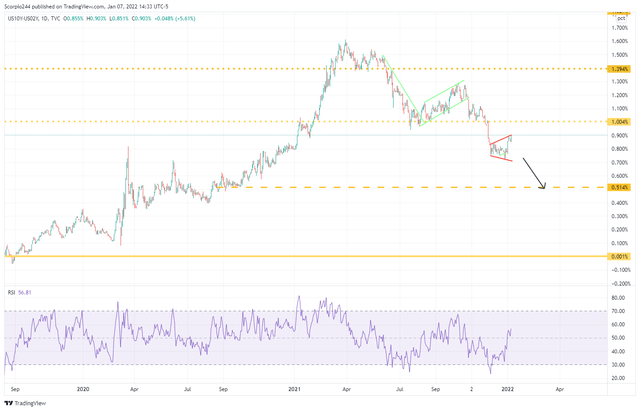 So the Fed will be left to tighten monetary policy at a time when inflation rates are likely to slow naturally on their own and at a time when economic growth and the job market have come pretty close to their peaks. It will increase the odds of the Fed over-tightening, causing a policy error and thus a recession.

Stocks may finally be waking up to what the bond market has been saying for months. The Nasdaq composite peaked in November and, despite several attempts, has been unable to rally and is now on the cusp of dropping back to its October lows. 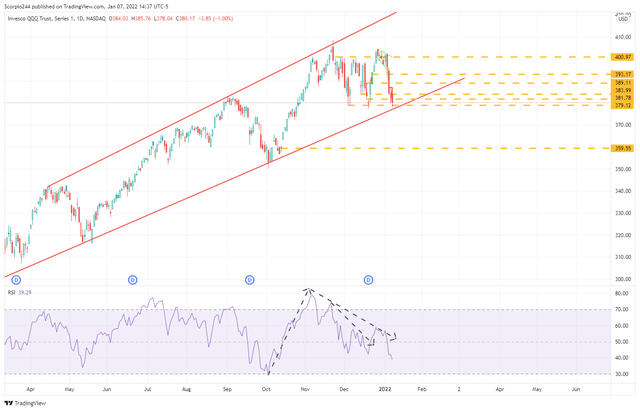 Yep, the Fed will be raising rates very soon, probably by March. Let's see how much longer it will take before the stock market freaks out that Fed may be about to push the economy over the proverbial cliff.