When last discussing the small and underfollowed KNOT Offshore Partners (NYSE:KNOP) in the lead up to their second quarter of 2021 results, they were facing a critical debt refinancing, as my previous article discussed. Thankfully this was subsequently completed and their very high distribution yield of 13.87% remained intact but when looking ahead into 2022 and beyond, clouds are forming, especially with their recent incentive distribution rights elimination lining up for a distribution reduction.

Since many readers are likely short on time, the table below provides a very brief executive summary and ratings for the primary criteria that were assessed. This Google Document provides a list of all my equivalent ratings as well as more information regarding my rating system. The following section provides a detailed analysis for those readers who are wishing to dig deeper into their situation.

*Instead of simply assessing distribution coverage through distributable cash flow, I prefer to utilize free cash flow since it provides the toughest criteria and also best captures the true impact upon their financial position. 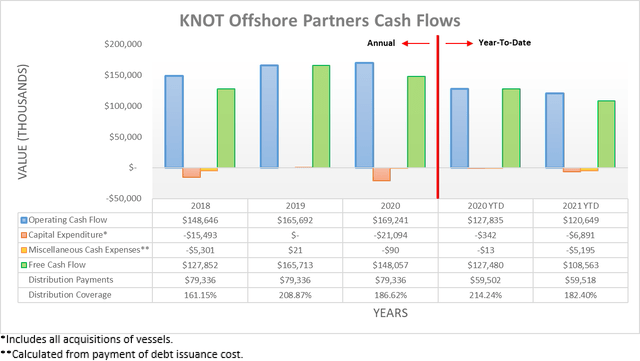 "During July 2021, the Vigdis Knutsen went off-hire for 17 days due to an outbreak of COVID-19 on board the vessel which was quickly contained with no serious ill-health caused to any persons affected. The vessel went back into operation on July 31, 2021.

On July 19, 2021, the Tordis Knutsen developed a technical fault on its azimuth thruster and the vessel went off-hire. The vessel was repaired and returned to service after 37 days. The Partnership does not expect to collect loss of hire or hull & machinery insurance payments in this instance."

Thankfully these impacts are only very short-term and their distribution coverage has remained very strong at 182.40%. Although this coverage is not currently anywhere near problematic, there are still far greater concerns on the horizon clouding the outlook for their upcoming financial performance during 2022 and beyond with a number of their vessels coming off charter contracts, as the graph included below displays. 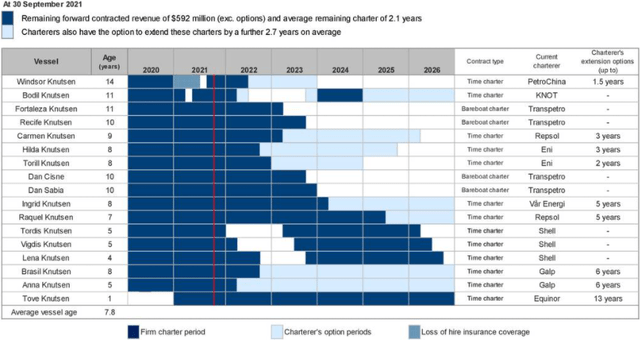 After seeing most of the fleet covered by charter contracts during 2020 and 2021, it can be seen that they are beginning to face a wave of these ending in 2022 and beyond. Whilst this is not always a problem, even management has flagged a difficulty winning new charter contracts or at least winning them at desirable prices, as per the commentary from management included below.

"Shuttle tanker demand continues to reflect the delays to offshore project development timelines following from the dramatic capex reductions instituted by offshore oil producers during the early days of the COVID-19 pandemic. Despite the resumption of offshore development activity in response to the strong recovery in oil demand, the lag effect introduced by the delay in capex deployment continues to have an impact on the shuttle tanker charter market.

Low vessel newbuilding prices which existed throughout 2019, 2020 and into 2021 have also impacted the competitiveness of the Partnership's fleet during charter renewal discussions, relative to the ordering of newbuildings."

This topic was covered in length by a fellow author and if interested in further details, I recommend reading their article since the primary focus of my analysis is upon the implications of their recent incentive distribution rights elimination, hereon referred to as IDRs. This transaction has been structured to be cash flow-neutral whereby new distributions equal their previous IDR distributions and whilst tempting to simply assume that their parent company who holds these IDRs is being altruistic, when viewed through a win-lose lens this appears to actually be lining up for a distribution reduction given how their previous IDRs were structured, as the table included below displays. 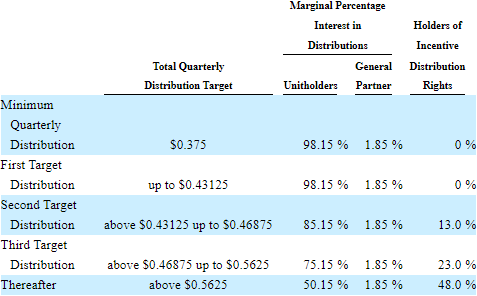 Whereas under this new structure, they will still see a reduction in the event that distributions are reduced but their new common units will still receive the applicable distribution and since anything is more than nothing, they would be better off under this new structure if their distributions are reduced. On the flip side, they no longer stand to see an increasing percentage of distributions if they were to continue growing above the previously mentioned targets, which effectively reduces the reward that their parent company would have seen from higher distributions. When these two variables are combined, it shows that their parent company has capped their upside potential to reduce their downside risk, which considering the now cloudy outlook for their financial performance that could strain their distribution coverage, makes the timing of this sudden change particularly interesting and in my view is lining up for a distribution reduction. 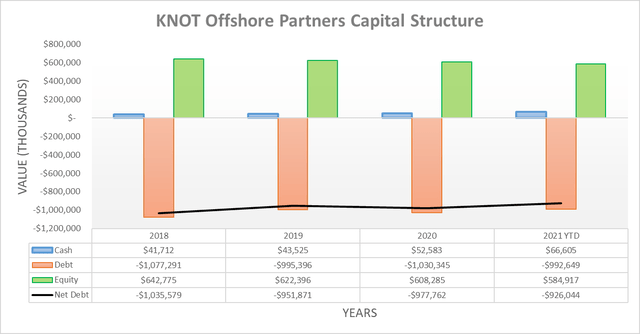 When casting an eye over their capital structure, unsurprisingly, their excess free cash flow after distribution payments has seen their net debt continue trending lower to $926m versus its level of $957.6m when conducting the previous analysis following the first quarter of 2021. Despite their consistently very strong distribution coverage since at least 2018, they nevertheless still kept their distributions unchanged and instead prioritized deleveraging, which actually increases the probability they will reduce their distributions if their upcoming financial performance suffers. 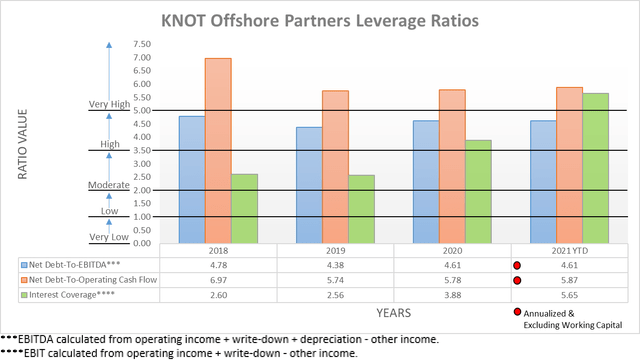 When reviewing their leverage, it still straddles the crux between the high and very high territories with their net debt-to-EBITDA of 4.61 beneath the threshold of 5.01 for the latter, whilst their net debt-to-operating cash flow of 5.87 obviously exceeding this threshold. This is essentially identical to the situation at the end of 2020 and also when conducting the previous analysis following the first quarter of 2021. Similar to these previous analyses, their leverage has been judged on the lower side due to the strength of their interest coverage that sits at 5.65 and thus is more indicative of high leverage instead of very high leverage. Whilst this does not pose any issues, if their upcoming financial performance suffers the lower earnings and cash flow performance will obviously send their leverage higher, which could possibly endanger their fiscal stability and thus could prompt management to respond by reducing their distributions to expedite deleveraging.

Thankfully they successfully refinanced their 2021 debt maturity, whilst also significantly reducing their maturities in 2022 from its previous level of $311.8m down to only $91m, as the table included below displays. This restored their liquidity back to strong levels, given their cash ratio of 0.55 that makes up for their slightly low current ratio of 0.69. When looking ahead, this should not change regardless of whether their distributions are reduced, although their large $310.9m maturity in 2023 could pose a hurdle to repay or refinance if their upcoming financial performance suffers and thus further increases the probability of a distribution reduction.

After spending most of 2020 and 2021 positive on distributions, sadly the tide now appears to be turning with their upcoming financial performance likely to suffer due to the shuttle tanker market weakening as old charter contracts expire, which by extension, now makes a distribution reduction a real possibility. Interestingly at the same time, they eliminated their IDRs in a way that ends up being favorable if their distributions are reduced, thereby seemingly lining up such an event. Whilst this tone may now sound rather bearish, I still believe that maintaining my neutral rating is appropriate given their very high double-digit distribution yield that broadly compensates for these risks.

Notes: Unless specified otherwise, all figures in this article were taken from KNOT Offshore Partners' SEC filings, all calculated figures were performed by the author.

Daniel Thurecht
9.76K Followers
My analysis primarily focuses on income investments with a preference for those sporting high and very high yields.  Whilst this space often contains value traps, it also contains very desirable deep value opportunities that have the potential to generate significant alpha for investors, which I aim to highlight through careful fundamental analysis.  Apart from my extensive personal investment experience that spans over a decade, I have also obtained a Bachelor degree majoring in Finance, minoring in Accounting with Honours IIA.
Follow