The big headline on Friday was the poor December retail sales data which declined by -1.9% month-over-month, compared to the consensus for a flat readout. The result was blamed on a combination of persistent inflation which has pressured consumer budgets, along with ongoing Covid disruptions. This follows what was already a soft November retail sales report last month on top of a disappointing miss in December payrolls along with poor consumer sentiment.

The timing here is critical. It was only into the final two weeks of December that Omicron cases began to surge through the holidays which made headlines through thousands of flight cancellations and also other businesses forced to temporarily close with workers out sick. As it relates to the December retail sales data, keep in mind that it was largely business as usual for most of the month while the bigger hit came into the final week.

A Trend of Weaker Economic Data

Into January, the Covid data has continued to deteriorate including a record number of hospitalizations with schools either canceling classes or moving back to remote learning. Companies have also pushed back return-to-the-office plans. It's fair to assume that retail sales are poor at the start of the year which represents a direct hit to current Q1 estimates for corporate sales and revenue growth.

Another dynamic that has not gotten enough attention is the end of the advanced Child Tax Credit (CTC) payments with the program not being renewed as a fallout of the stalled Build Back Better Act. For context, over 36 million U.S. households got an aggregate cash payout totaling $16 billion per month since July 2021. Connecting the dots with the level of monthly retail sales registered at $628.8 billion in December; CTC represented a form of economic stimulus boosting spending by upwards of 2.5%. In other words, take away the CTC from the December data, and the drop in retail spending is even worse.

For families missing out on an average payment of $444 per month, the loss sets up a consumer spending growth cliff beyond Covid headlines and inflation trends. So what's head-scratching here is how weak the December retail sales data was even as the program was still active. This disconnect is a game-changer in our view because it sets up even weaker data through the first half of 2022.

It's not controversial to expect the January retail sales and also payrolls when released in February to be terrible in this environment. The weakness can linger even as Covid figures improve. Again, the question here is how much of these trends are simply transitory, that can quickly snap back higher when this Omicron wave ends, or if there is a more concerning structural component which is our view.

The Fed Can Walk Back

The narrative thus far has been that the economy is "strong" and this current weakness is just temporary. Here we can draw a parallel to the messaging on inflationary trends for most of 2021 which the Fed insisted would reside on its own before making an about-face in December. The point is, even policymakers get it wrong, and that's what we see going forward with the risk of a broader economic contraction.

It's worth mentioning that many of the trends right now in the market including surging interest rates and the broad consensus that the Fed is on track to embark on a rate-hiking stems from the December FOMC meeting, which itself was built on data the Fed was looking at from November. We make the case that conditions have changed for the worse which also adds some downside to inflationary trends as the output gap widens.

The market can start looking forward to the next FOMC meeting. We don't need a crystal ball to see that when the Fed meets in two weeks, the carefully worded statement will have to include comments regarding what has been a surprising turn of events in both Covid and the most recent soft economic indicators. While the Fed was not expected to move on rates this month, this meeting was seen as teeing up the more consequential March meeting with a potential rate liftoff. Here is the setup for what the Fed will be dealing with on January 26th:

It's a poor backdrop into a rate hiking cycle. We see an opening where the Fed presents a new message that turns down the "urgency" for hiking just a notch compared to the December meeting, citing new data and ongoing uncertainties. There is also a case to be made the weaker macro setup sets up the potential that the CPI can surprise lower over the coming months.

To be clear, we still expect the Fed to hike this year, but the consensus for three or four rate hikes in 2022 can evolve into something like two or three with a later liftoff. The important point is that every month going forward will remain dynamic. If conditions get bad enough, which would be reflected in another deep leg lower in equities, the Fed can hold off on hiking for longer.

The Opportunity in Bonds and Gold

The call we are making is to be bullish on long-dated bonds. The thinking here is that since the December FOMC meeting, bond bears have been piling into short positions on Treasuries across the yield curve that has likely gotten ahead of itself. Any sign that the Fed is going to tap the brakes on its hawkish flight, even just tilting a touch more dovish can be enough for rates to pull back lower.

We're making the case that a weaker than expected economic outlook with downside risks to growth supports a bullish view on bonds. Another asset class that benefits from this setup is gold (GLD) which has impressively been resilient over the last few months hanging above $1800/oz despite the climb in rates. If we are correct that Fed will have to walk back on its rate hike messaging, even at the margin, this could represent an upside catalyst for gold as a store of value into real-rates turning more negative.

The situation with stocks is a bit trickier. High-growth stocks and the technology sector have been particularly under pressure based on the trend of higher rates. In this regard, a case can be made where "bad news is good news" on the macro front if it allows the Fed to stay accommodative for longer. A pullback in rates could be enough to provide a bid for tech stocks.

There is a sense that the deep selloff among momentum sectors of the market has already gone far enough to price in some of the worst-case scenarios in terms of rates and the economy. The possibility that the Covid figures improve quickly from here would be overall positive for sentiment, but at the same time also add to inflationary pressures. There is no easy way out of this situation.

The other side to the discussion is how deep of an impact will the economic weakness into Q1 have on earnings this quarter and the outlook for the full year. It's hard to see companies exposed to trends in consumer spending as a group beating expectations in the current environment. Mega-cap leaders like Amazon.com, Inc. (AMZN), Apple Inc. (AAPL), and even Microsoft Corp. (MSFT) are going to be operating under more challenging conditions against potentially softer demand.

We argue that disappointing economic growth is worse for the group than a rate hike but will need confirmation to break down from the long-running up channel in stocks. The NASDAQ-100 (QQQ) is off a modest 8% from its Q4 2021 high. On the downside, we see the $320 price level as in-play representing an area of technical support going back to Q2 of last year. The risks are tilted to the downside with the mega-cap names heading into their upcoming Q4 earnings.

Signs that economic conditions are weaker than they appear, beyond the recent Covid disruptions are emerging at an important point in the market cycle. The big miss in December retail sales serves as a warning that the narrative in the market is fragile with risks tilted to the downside. The upcoming weeks will be important to set the tone for the January FOMC meeting which will force the Fed to reconcile what has been some big changes compared to messaging from December.

Add some conviction to your trading! Exclusive stock ideas from our "ALPHA PICKS" along with the best daily market trading commentary. Join the community and active chat room. Click here for a two-week free trial at the Conviction Dossier. 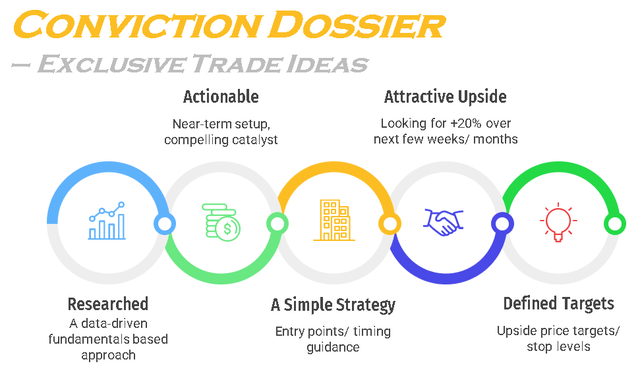 Disclosure: I/we have a beneficial long position in the shares of GLD, EDV either through stock ownership, options, or other derivatives. I wrote this article myself, and it expresses my own opinions. I am not receiving compensation for it (other than from Seeking Alpha). I have no business relationship with any company whose stock is mentioned in this article.