It would further slow economic growth, and likely even cause some zombie companies to go under because higher interest rates would push them over the edge. Then you'll have mortgage rates climb, pushing payments into unaffordable territory for many homeowners.

If mortgage rates climb, home builders will sell less homes. And will mean less construction jobs, as well as lower sales of construction materials. The point is, there's a huge domino effect of unintended consequences.

Odds are pretty good now that, since the Fed's raising rates (way too late), they will actually trigger a recession for all the reasons I just explained. Normally, when a recession comes, the Fed tries to lower rates, in order to stimulate economic activity. But if they've only raised rates to about 2%, they will have almost no room left to cut. It's a huge dilemma, and investors are catching on.

I think we're now at an inflexion point. People have seen the high and rising inflation of the past year, but probably thought it would soon fall back to a more manageable level.

Clearly, they can see that's not the case. Even worse, they've been watching as prices have been climbing faster. And since the Russia-Ukraine war started, it's kicked inflation into even higher gear.

I now expect inflationary psychology to kick in. That's when people start to accept that inflation is going to remain at high levels, and for the next several years. As a result, they try to "get ahead" of inflation. So they buy more, and they buy some things sooner than planned to avoid even higher prices in the future. The thing is, this creates a feedback loop of even higher and faster rising prices; a vicious circle that becomes very difficult to break.

What can you do about it? Well, silver crushes inflation. In the 1970s, we experienced an entire decade of high and rising inflation. Yet silver generated a gain of 3,700%. That's not a typo. And silver stocks did considerably better than that.

I think we're in for an inflationary shock, with potentially higher rates in the near future and likely to last for some time. As investors come to realize this, and watch the broader stock market continue to struggle, they're going flock towards silver. And that will help push this sector much, much higher.

Technically, silver has been quite strong. In the first few days of March, it surged along with the US dollar, gold, oil and a host of other commodities. It has since pulled back but bounced right after the Fed officially announced its rate hike, and has stayed elevated near $25.50 since. 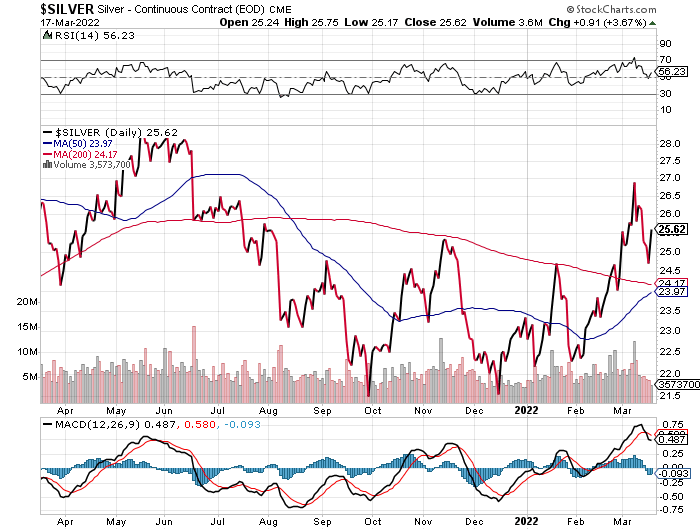 We can see in the chart above that the RSI has made higher lows since mid-December along with the MACD. And the 50-day moving average looks about ready to cross above the 200-day moving average, forming a bullish "golden cross". Silver's upside targets are $26.50, $27, then $28.

Silver stocks, while constructive, have more work to do. The RSI has been establishing higher lows going back to mid-December. The MACD has been confirming the rally since late January. But the Global X Silver Miners ETF (SIL) has clear resistance at the $38 level. Once it crosses $38, there's a pretty clear path to $41. 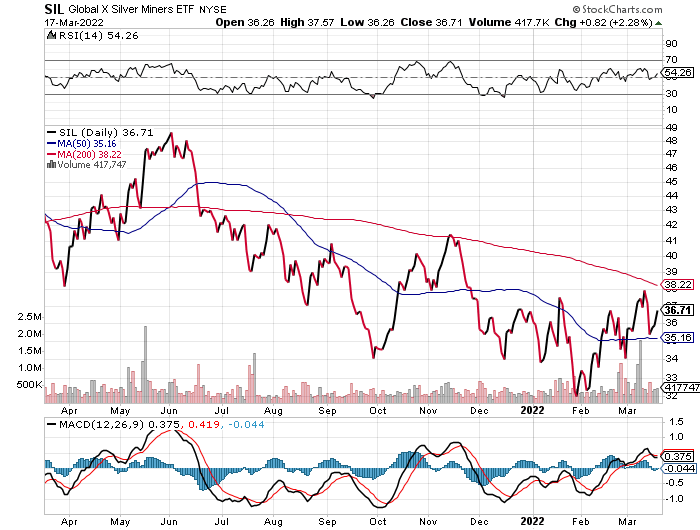 And looking at the PureFunds ISE Junior Silver ETF (SILJ) - which is actually mid-tier silver companies - we see a lot of recent strength. The $14.50 area appears to be the main overhead resistance level. After that, $15.50, then $17.50 look like the next upside targets. 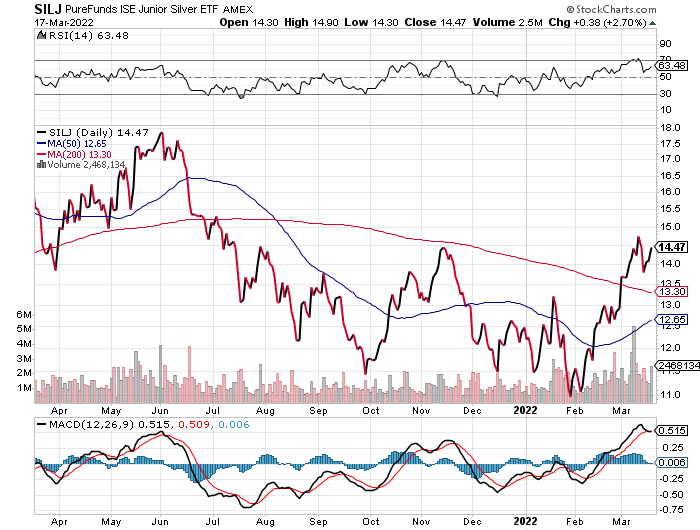 Overall, silver's technical picture is looking quite strong. And with the rate hikes now officially started, I think we could see silver continue to climb. On a seasonal basis, the next couple of months suggest more strength ahead.

MoneyShow
1.29K Followers
MoneyShow — an industry pioneer in investor education since 1981 — is a global, financial media company, operating the world's leading investment and trading conferences. Each show brings together thousands of investors to attend workshops, presentations and seminars given by the nation's top financial experts. The company also offers exclusive seminars-at-sea, with the investment industry's leading partners. In addition, MoneyShow operates the award-winning, multimedia online community, Moneyshow.com and publishes free Investing and Trading newsletters, which provide individual investors with exclusive ongoing access to the latest investment and trading ideas from the nation's most respected and trusted financial newsletter advisors.
Follow
3 Comments