fuboTV's (NYSE:FUBO) stock is a touchy subject right now. When it fell to $15, I added. Then it jumped and crossed $30, then $35. At last, all looked to be in the clear. But then, even as the company performed above all expectations each quarter, the stock has taken a one-way trip to $6 without any relief rally or looking back. The company is headed for bankruptcy. Or, at least, that's what the price action tells you. But if we roll back the curtain and look at the company's performance and, more specifically, its cash burn and margins, it reveals a relatively upbeat picture.

The company is not at risk of running out of cash to operate the business, and its latest move - likely by the newly hired CBO - bolsters the margin improvement journey.

The first metric to look at is the company's net loss. This indicates the progress toward breaking even where the company doesn't have to use cash on its balance sheet or raise capital via its at-the-market shelf offering or debt issuance to operate. Now, the trend in dollar terms appears to be trending a bit higher, but the net loss margin is getting closer to zero. 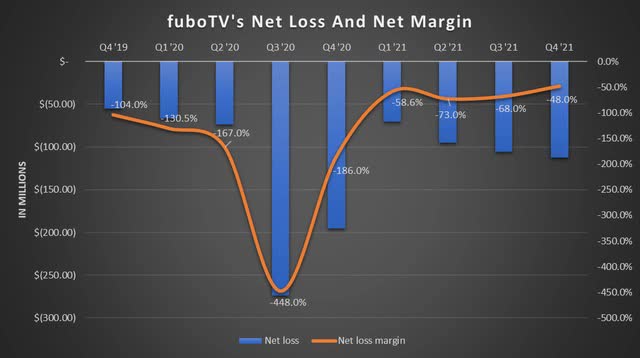 The problem is higher dollar amounts are what count. However, the company is not burning $112M (Q4's net loss) off the balance sheet each quarter. This is because its operating cash flow is not nearly as bad as its net loss.

Because the company is utilizing its ATM offering, it has raised ~$70M in both the recent third and fourth quarters. This puts the cash burn into perspective, especially as the company's cash balance is not depleting at alarming rates. Now, this doesn't mean the company isn't diluting itself to raise cash as its shares outstanding continue to increase, going from 138.9M shares in Q4 of 2020 to 153.9M in Q4 of 2021. However, the balance sheet has remained somewhat stable because of it, while the dilution isn't atrocious.

Therefore, the concern of running out of cash is not a near-term or medium-term threat. The long term depends on the company's ability to turn profitable. As it continues to invest in the business, this may walk up to the line of breakeven. Still, it can afford to continue losing money to invest in products for future revenue and lessening acquisition costs. It can easily survive the next few years at the current burn rate. Granted, this includes further ATM cash raises. But, even if the company halves its ATM share issuance, it can still operate for seven-to-eight quarters.

Recently, there has been a reinforcement of the cash burn argument for bulls, a topic I alluded to at the beginning of this article. On Monday, the company announced it would be dropping its Starter Plan and pushing all current Starter Plan subscribers to the Pro plan for $5 more per month. This is an immediate move toward higher ARPU (average revenue per user), something the market has pointed to as a weak spot for the company.

While the move may be small, it pushes margins in the correct direction as long as churn (subscribers dropping instead of taking the $5 hit per month) remains steady. This will build on the 16% growth in ARPU the company saw in 2021. It also will push contribution margins higher and free cash flow toward neutral over 2022. If the company allows its acquisitions to digest and slows its M&A, it can further reinforce the bullish argument it's not going to burn through its cash in less than eight quarters.

Over the last six months, this story has not been reflected in the ever-falling stock price. The valuation also doesn't reflect the excellent execution and continued upward guidance the company has shown over the last two years. If this were a GoPro (GPRO) type situation where the company had dropped the ball and needed to attain investors' trust again, I could understand it. But, a company whose valuation is nearing a one times price-to-sales level when it has outperformed expectations and has more potential ahead of it isn't warranted.

The situation is a "show me" tale of Wall Street, but I contend it already is showing The Street it can execute and push toward its goals. The next most significant piece is for the wagering division to pan out. The company should have a plan with evidence to provide investors in the next month or so on this front. Right now, the market is pricing in a failure of this division with a loss on invested capital. However, I don't expect this to be the case.

While the market sells off the great execution and furthering margin improvements, I continue to accumulate shares. I'm in the this-will-pan-out camp over the next year or so. It's not a turnaround story of the business - it's a turnaround of the perception of the business. The company has enough cash to see its plan through and will bleed less and less cash as ARPU grows and subscribers continue to be added. I'm a buyer at these levels.

Decrypt The Cash In Tech With Tech Cache

Do two things to further your tech portfolio. First, click the 'Follow' button below next to my name. Second, become one of my subscribers risk-free for the first two weeks, accessing my real-time analysis and nailing getting in and out of fuboTV and tech, garnering massive profits along the way. Only my subscribers get my technical chart analysis and entry points for FUBO stock.

Joe Albano
14.14K Followers
Author of Tech Cache
A tech industry insider's best long-term picks, trades, and chart analysis
Joe Albano is a technology insider and combines his passion, education and career into his investing approach. Additionally, his young and in touch perspective allows him to understand the trends of the culture as well as how technology is working alongside it. Together, these invaluable insights have produced a strong investment track record for himself and his followers. You can join Joe and learn his insights and strategies by subscribing to his service Tech Cache.

Joe has a Bachelors of Science in Computer and Electrical Engineering. He follows technology related companies as well as blue chip industrials and consumer products. Joe writes mainly about technology companies, especially ones that he uses and consumes. Knowing the technical side of the products helps him in his analysis of what the product impact is to consumers and the markets they reach. Joe's interests lie in tech and growth stocks.

Joe works for a technology contracting company as a Release Manager working with Dev/Ops tools and integrating CI/CD systems. This entails automating workflows and deploying compiled artifacts using change control/version control software and deployment automation tools. The sector of his work is governmental and deals with the department of health. He previously worked in the IT field of the healthcare industry for a major teaching hospital and practice group working mostly with integration engines for use with hundreds of systems as well as end user application access and security including single sign-on.

A Little About Joe...

Joe enjoys a variety of hobbies including playing drums and building racecars made for the ice and asphalt. He raced nationally in college for Baja SAE and continues to build racecars and race on a regional level both on road courses and frozen lakes.

Disclosure: I/we have a beneficial long position in the shares of FUBO, GPRO either through stock ownership, options, or other derivatives. I wrote this article myself, and it expresses my own opinions. I am not receiving compensation for it (other than from Seeking Alpha). I have no business relationship with any company whose stock is mentioned in this article.