Despite the market correction, Teradyne (TER) trades at 22x PE, fueled by headlines of mega semiconductor projects under development. To a large extent, TER's revenue growth is tied to capital expenditure "CAPEX" on new manufacturing facilities, providing a temporary revenue boost, followed by a correction. Beyond this short-term boost, average revenue also increases, as the number of manufacturing facilities increases, to the degree that these facilities periodically replace TER's systems as they reach the end of their lifespan. These dynamics are mirrored in TER's historical revenue trends. For example, revenue declined in 2012, 2014, 2016, and 2019 on a YoY basis, but still, in all cases, revenue ended above the historical average.

Understanding these complex revenue dynamics is critical to assessing TER. Some technical stock analysts draw uptrends between upper and lower bounds, which is the best way to think about TER revenue trends.

In the past two years, semiconductor manufacturers invested heavily in additional production capacities to meet shortages created by pent-up demand from fiscal and monetary stimulus, combined with supply chain disruptions due to the pandemic. Shares reach their peak in late December 2021 at $168 per share, mirroring TER's position at the height of the revenue cycle, beyond the long-term upward trend. In the short and medium run, revenue will likely decline as CAPEX inevitably returns to historical averages, which might happen soon. Today, pundits are expressing concerns that the semiconductor shortage might become a glut as foundries continue to build mega-chip manufacturing facilities worldwide.

Looking at the big picture, one can't ignore the accommodative digitalization trends or what I like to call supercycles that have historically supported TER's revenue. For example, in the past decade, semiconductor production facilities increased with the introduction of smartphones. The next supercycle will be fueled by electric vehicles and automated driving systems.

Given the current high price multiples, combined with the long-term nature of digitalization supercycles, investors should expect average returns in the short and medium run. Revenue will likely decline in the coming years, followed by higher demand in the long run as new electronic manufacturers go online, potentially driven by the higher rollout of EVs and automated driving systems, and who knows, maybe space travel. Our hold rating mirrors long-term digitalization trends, weighed against revenue cyclicality, lack of competitive moat, and high valuation.

Eventually, TER revenue will return to historical averages, along with CAPEX. This cyclicality is mirrored in the Seeking Alpha Quant Score System, which rates TER D- on growth due to the lack of consistency.

As revenue fall, so will margin gains experienced in recent quarters. As a manufacturer, TER benefits from favorable economics of scale. The gross margin currently stands at 60%, two hundred basis points above its 5-year historical average, despite the unprecedented inflation levels. Its EBITDA margin is five percent higher than the 5-year average. However, as revenue decline, so will margin rates, exacerbating the impact on PE ratios.

TER's clients are located in Asia, where production costs are low. However, with government aid and political pressure, several leading semiconductor manufacturers announced new facilities in the US.

Below is a list of a few of these projects.

Below is a graphical representation of TER sales by country:

TER ended 2021 with $1 billion in cash, compared to $170 million in debt, demonstrating a robust financial position. Debt / FCF stood at 1.7x, one of the lowest ratios among its peers. The company's low leverage assuages fears over the impact of rising interest rates on its borrowing costs. In 2021, Net interest expense stood at $11.6 million, compared to $1.2 billion in operating income.

Historically, TER recorded negative FCF during economic disruption. Given the competitive nature of the business, combined with rapid change in the semiconductor industry, capital expenses are critical to maintaining market relevance. For example, if TER doesn't keep up with changes in the microchip industry, its product portfolio might become obsolete. 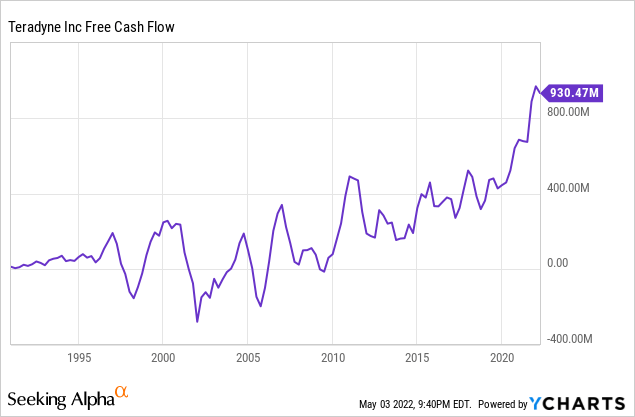 TER's high valuation is more problematic than its revenue cyclicality. Despite the recent selloff, it is still valued at $17 billion. Even if TER maintained its current profitability rates (which I believe is unlikely), its PE ratio stands at 22x.

I always find it helpful to imagine buying the entire company to assess valuation. Shares are trading at $109 per share. If I buy the whole company, I will pay $17 billion in return for $900 million in net income, translating to a 5% earnings yield (defined as earnings over market cap). Currently, 10-year treasury bonds are trading at 3%, and if the Fed meets market expectations, this rate could reach 4% - 4.5% by year-end. I'd rather wait until the end of the year and buy a 10-year treasury bond than buy TER at its peak revenue cycle. If revenue trends back to the historical average, the earnings yield is much less than 5%.

TER only started paying a dividend in 2015, many years after its foundation in 1960. The lack of historical data makes assessing consistency problematic, especially given cyclicality.

For now, dividends seem safe, given the low payout ratio, and I expect TER to grow its distribution in the coming quarters incrementally. Nonetheless, this comes from a low yield base of 0.4%.

TER is at its peak revenue cycle, and I believe revenue will likely depreciate in the coming quarters. A ramp-up in capacity-building since the pandemic will likely turn into a glut. In the long-term, TER will profit from accommodative revenue tailwinds manifested in higher demand for electronic devices and semiconductors, supported by a rise in EV sales and automated driving systems.

On the positive side, TER enjoys a robust balance sheet with low debt, giving it strategic flexibility to invest in its technologies, a critical element to remain relevant in a rapidly changing semiconductor landscape. Overall, I believe that buying TER today will generate modest returns below the market index.

Bashar Issa
3.06K Followers
Bashar is a contributing writer at Seeking Alpha, focusing on Long/Short investment ideas, with a geographic focus in North America. Before that, Bashar worked at an Investment Fund in the United Kingdom. He has a Master's degree in Finance from the Queen Mary University of London and a Bachelor's degree in Economics from Middlesex University.
Follow

Disclosure: I/we have a beneficial long position in the shares of TER either through stock ownership, options, or other derivatives. I wrote this article myself, and it expresses my own opinions. I am not receiving compensation for it (other than from Seeking Alpha). I have no business relationship with any company whose stock is mentioned in this article.