The Southeast Asia (SEA) region has ambitious goals to achieve net-zero emissions between 2050 and 2065. It surely will require great efforts for the region's power sector to achieve these targets, as most SEA countries rely on fossil fuels to meet their power demands. In 2020, coal-fired power accounted for more than half of SEA's power supply, from Indonesia (61%), the Philippines (57%), Malaysia (51%), and Vietnam (50%). Some SEA countries rely less on coal, but their energy sources are heavily reliant on natural gas, with Singapore at 96% and Thailand at 53%.

IHS Markit recently published Southeast Asia (SEA) power and renewable market briefing for the first quarter of 2022 (Q1-2022) and discussed the recently announced policies that are related to their new renewables target in four SEA countries (as shown in the chart below): 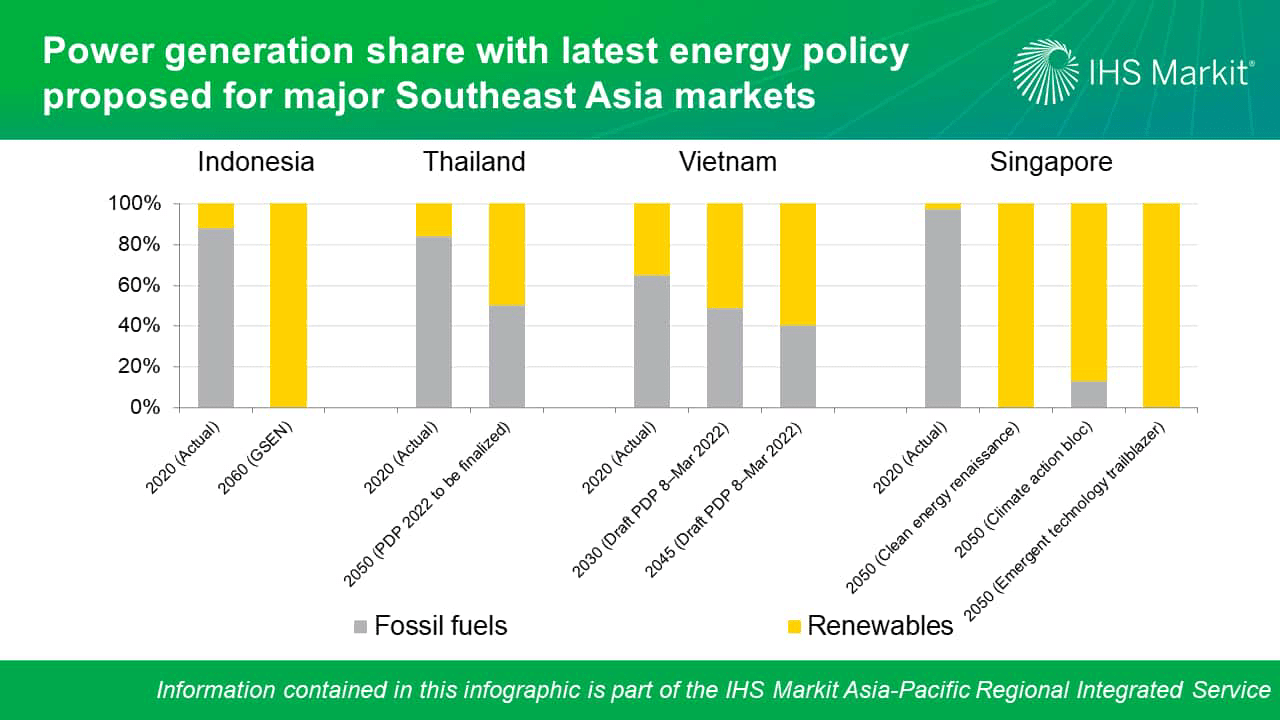 Indonesia's Ministry of Energy and Mineral Resources (ESDM) proposed to have 100% renewable energy in the energy mix by 2060 through the National Grand Energy Strategy (GSEN), with the goal of achieving net-zero emissions by 2060 or sooner. The GSEN anticipates that the capacity addition will be entirely from renewables from 2030, and the total installed capacity will reach 587 GW of renewables by 2060. Coal plants owned by the state-owned utility PLN will be retired sooner than their lifetime. Indonesia obviously stepped up its ambitions in achieving net-zero emissions by 2060, but concerns linger over the execution. There are no solutions presented in the GSEN proposal for fundamental issues such as grid reliability and stability issues with 100% penetration of intermittent renewables, neither did it describe a solution to overcome the financial barriers in renewables development. As a result, it is unlikely for the market to shift to 100% renewables before a proven model is available and clear policies are enacted to enforce that model.

Thailand intends to ramp up the renewable energy share to 50% in the energy mix by 2050 in order to achieve climate pledges. Thailand's Ministry of Energy unveiled plans to increase the renewable share to 50% by 2050, and the goal of achieving carbon neutrality and net-zero greenhouse gas (GHG) emissions by 2050 and 2065, respectively. Thailand's power fuel mix will evolve to uptake more imports from Laos, with the PPA increasing from 9GW to 10.5GW, and advanced clean technologies, such as hybrid projects combining hydro, floating solar and storage, and carbon capture and storage (CCS) system.

Vietnam's strategy centered on green and affordable power supply, with the goal of achieving net-zero emissions by 2050. After several amendments to the draft Power Development Plan VIII (PDP8),the final PDP is targeted to be submitted to the PM in May for approval. Two plans were proposed in the March 2022 version of the draft PDP 8. The first plan called for total installed capacity of 146 GW by 2030 and 352 GW (including 7.8 GW of rooftop solar power) by 2045, with the lowest fossil fuel share among all draft versions at 48.5% and 40.2% by 2030 and 2045, respectively. The second plan with higher installed capacity, 151 GW by 2030 and 427 GW by 2045, is unlikely to be implemented due to lack of national grid development planning to accommodate power expansion and the huge investment required to upgrade the transmission network.

Three scenarios were put forth for Singapore to reach net-zero by 2050. Singapore's Energy 2050 Committee published a report, "Charting the energy transition to 2050", which aimed to achieve net-zero emissions in power sector by 2050. Based on the three scenarios, the committee concluded that achieving net-zero emissions is realistic and technically feasible while maintaining energy security and affordability. The three scenarios—clean energy renaissance, climate action bloc, and emergent technology trailblazer—all represent a significant shift from Singapore's current generation mix that is dominated by natural gas. The scenarios show that hydrogen use and electricity imports will play a crucial role in future power generation mix, accounting for 70-80% of the country's power demand.

Markit
2.54K Followers
IHS Markit (Nasdaq: INFO) is a world leader in critical information, analytics and solutions for the major industries and markets that drive economies worldwide. The company delivers next-generation information, analytics and solutions to customers in business, finance and government, improving their operational efficiency and providing deep insights that lead to well-informed, confident decisions. IHS Markit has more than 50,000 key business and government customers, including 80 percent of the Fortune Global 500 and the world’s leading financial institutions. Headquartered in London, IHS Markit is committed to sustainable, profitable growth.