During turbulent times like this, investors often turn to consumer staples as a safe heaven. However, the safe heaven is going through a storm now. Last week, its leading stocks, retail giants Walmart (WMT) and Target (TGT), all reported headwinds due to inflation and higher costs. Both suffered large corrections after earnings: Walmart's stock price lost about 20% and Target about 28%. Such corrections brought enormous pressure to the consumer staple sector. The sector fund, Consumer Staples Select Sector SPDR Fund (NYSEARCA:XLP), lost close to 10% of its price last week.

Looking forward, we see that more volatility is coming to the consumer staple sector, especially during the next week. Other heavyweights in the sector, including companies such as Costco (COST), Best Buy (BBY), and Macy's (M) will announce their earning results. It is very likely that the earnings will report negative surprises and can trigger another round of sell-off.

And this brings us to the thesis of this article:

We will elaborate on the above points immediately below.

As you can see from our market sector dashboard below (and you are welcome to download it here), the Consumer Staple Sector as represented by XLP is one of the more attractive sectors now.

Details of the mechanics of the dashboard can be found in our earlier article on XLE. As mentioned in that article:

We use the dashboard to put our finger on the pulse of the market and its major sectors. Especially, the simple yield spread (the TTM dividend yield minus the 10-year Treasury rates) is the first thing we look at. According to our dashboard, XLE was the most attractive sector compared with other sectors.

Indeed, the energy sector has been the one sector that has shown a sizable gain of 22% since a quarter ago. The other three sectors that have shown a positive return are healthcare (about 2%), basic materials (essentially 0%), and utilities (about 8%). And all other sectors have suffered substantial losses. With the recent sell-off in the consumer stable sector, it has become more reasonably valued with a positive dividend yield Z-score of 0.24. Although its yield spread Z-score is still in the negative (negative 0.7). But against, it is relatively mild in absolute terms (I won't be too alarmed for any Z-score that is between positive 1 and negative 1). And relative to other sectors, it is the 5th most attractively valued sector compared to the risk-free rates.

XLP tracks a market-cap-weighted index of consumer staples firms in the S&P 500. As of this writing, it holds a total of 33 stocks. The fund's assets are almost all large-cap stocks. Although it is quite top-heavy. Its top 10 stocks represent more than 70% of its total asset, resulting in more focused exposure. And MO is one of its largest holdings, representing almost 4.35% of the total assets.

As you can see from the following chart, MO has delivered far superior performance in the long run than XLP. Since 2000 when the fund was launched, MO has delivered an annual return of 12.7% compared to about a 7% from XLP, leading to almost 4x total return over the past 22 years. Although note that MO, as a single stock, has suffered higher price volatility than the fund. It has suffered a standard deviation of 24.4%, almost 2x of XLP's 12.3%. Its worst year performance was 54% compared to XLP's 20%. And its maximum drawdown was a nerve-wracking 60%, compared to XLP's 32%.

Looking forward, I expect such outperformance to continue given MO's superior profitability and valuation, as detailed immediately next.

As you can see from the following chart, compared to XLP, MO deliver far superior profitability and historical growth yet is for sale at a significant discount.

The following chart zooms in on the profitability comparison in terms of ROCE more closely. The ROCE here is calculated using MO's annual financials for the past 10 years. As can be seen, the ROCE of MO is on average about 137%. it started the decade with a ROCE of around 90% to 100%. And it dipped a bit to the 100% level again during 2016 and 2017. But overall way, its ROCE has been remarkably consistent and a level of 137% makes its profitability more competitive even than many of the FAAMG stocks. furthermore, its current ROCE is at 164%, higher than its long-term average by a whopping 27%.

In contrast, XLP's profitability is less impressive. Using the equity as an approximation for the sector capital employed, its ROE is about 22.5%. It is a respectable level and comparable to the overall economy, but nowhere near MO's long-term average of 137%.

MO and XLP: inflation and dividends

As aforementioned, leading stocks in the XLP such as Walmart and Target have reported headwinds due to inflation and higher costs. And other heavyweights in XLP such as Costco and Best Buy are very likely to report similar headwinds next week. Such headwinds are unlikely to subside until the Fed convinces investors that it can strike a delicate balance - tightening monetary policy to contain inflation on one hand by not triggering an economic downturn on the other hand.

MO, thanks to the unique nature of its products, is likely to fare better and weather such uncertainties in a more resilient matter. In its 2022 First-Quarter earnings release, it reported quite positive results. It does not only expect its earnings to decline but also reaffirmed that it expects its 2022 full-year earnings to grow by 4% to 7% thanks to its stable shipment volume and pricing power. As its CEO Billy Gifford commented,

We are off to a strong start to the year and believe our businesses are on track to deliver against their full-year plans. Our tobacco businesses performed well in a challenging macroeconomic environment and we continued to make progress toward our Vision to responsibly lead the transition of adult smokers to a smoke-free future. We reaffirm our guidance to deliver 2022 full-year adjusted diluted EPS in a range of $4.79 to $4.93. This range represents an adjusted diluted EPS growth rate of 4% to 7% from a $4.61 base in 2021. We continue to expect that adjusted diluted EPS growth will be weighted toward the second half of the year.

MO also provides a much higher current dividend yield to combat inflation. As you can see from the following chart, MO has consistently paid a higher dividend yield than XLP. Currently, MO pays a dividend yield of around 7%. Compared to the 2.2% yield paid from XLP, MO provides investors with a yield spread of more than 4.8%.

To put things into a broader perspective, the second chart shows the yield spread between MO and XLP over a longer timeframe. As can be seen, the spread has always been positive because MO has consistently paid a higher dividend yield than XLP. The spread started at around 3.5% at the beginning of the decade and gradually narrowed to its lowest level of 1% from 2016 to 2017 when MO reached its peak valuation relative to XLP. Since then, the yield spread has expanded to the current level of more than 4.8%, the thickest level in more than a decade. Such a thick yield spread suggests that MO is drastically undervalued relative to XLP.

Finally, we want to point out the risks of both XLP and MO before closing.

If you like this analysis, check out Envision Early Retirement to see our other ideas and real portfolios.

We have helped our members not only to beat S&P 500 but also avoid heavy drawdowns despite the extreme volatilities in BOTH the equity AND bond market.

Join for a 100% Risk-Free trial and see if our proven method can help you too. 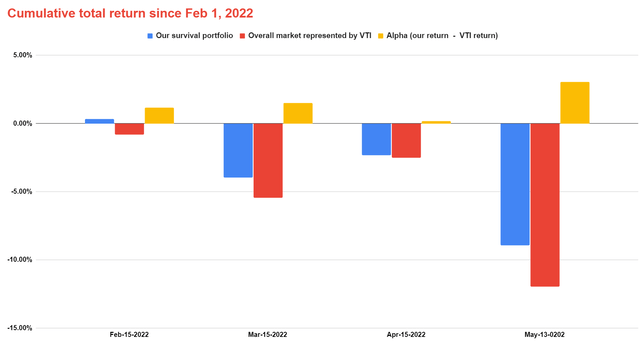 ** Disclosure: I am associated with Sensor Unlimited.

Department of Management Science and Engineering, with concentration in quantitative investment

Department of Mechanical Engineering, with concentration in  advanced and renewable energy solutions

Since 2006, have been actively analyzing stocks and the overall market, managing various portfolios and accounts and providing investment counseling to many relatives and friends.

Combined with Sensor Unlimited, we provide more than 3 decades of hands-on experience in high-tech R&D and consulting, housing market, credit market, and actual portfolio management. We monitor several asset classes for tactical opportunities. Examples include less-covered stocks ideas (such as our past holdings like CRUS and FL), the credit and REIT market, short-term and long-term bond trade opportunities, and gold-silver trade opportunities.

I also take a holistic view and watch out on aspects (both dangers and opportunities) often neglected – such as tax considerations (always a large chunk of return), fitness with the rest of holdings (no holding is good or bad until it is examined under the context of what we already hold), and allocation across asset classes.

Above all, like many SA readers and writers, I am a curious investor – I look forward to constantly learn, re-learn, and de-learn with this wonderful community.