When the current bear market is over, I expect we will see a whole new set of opportunities to make money.

But for now, patience and vigilance remain the key to success.

You know you’re in a bear market when China cuts a major interest rate and the US market responds with a paltry bounce and a continuation of its recent sell-off. But that’s where we are. And what it means is that the stock market has finally realized that the Federal Reserve is playing a dangerous game of chicken with the MELA system. And by the time the game plays out, a lot more damage may be done to the US economy than anyone, especially the central bank may be expecting.

In addition, as I describe below, bond yields are quietly rolling over; a sign that savvy traders are already betting on a slowing economy.

On the bright side—because news travels fast these days, if and when the Fed reverses course, the odds will favor a rapid and perhaps historically significant rebound in stocks.

All of this means that serious investors should be compiling a shopping list.

Out of Step with the Times

The fact is that the Federal Reserve, the US government, major banks, and the general public are basing their expectations on the future of the economy works based on the pre-Covid/20th-century pace of macro trend development—what I call the traditional pace.

For example, in the past, the economy would slow down and the stock market would follow. That’s because, in the past, the stock market tended to reflect the activity in the economy. And thus, a slowing economy would lead to lower corporate earnings and thus stock prices would fall in order to adjust for the expected reduction in corporate earnings. And in some ways, it still works in that fashion—sort of.

Here is the crucial difference. As my MELA system (M=Markets, E=the Economy, L= life decisions, and A= artificial intelligence) clearly illustrates, things have changed. The truth is that the markets now fuel the economy, which is why the economic slowdown may already be underway, even as the Fed, the money houses, and the general public fail to recognize it. Moreover, because MELA is a complex system, it will continue to operate in a way that seeks successful outcomes and emergence toward a higher level of operation. This, of course, means that change is inevitable. In other words, even when all of this is finally sorted out, I suspect it will all be much different than anyone can imagine.

Last week in this space, I noted that the stocks of used car dealers Carvana (CVNA) and Vroom (VRM) had fallen as sales were plummeting, on top of the fact that management had made some bad decisions along the way.

I also noted that I expected a rise in layoffs and a rapid acceleration of the correction in MELA. Now, during the week that ended May 20, 2022—we saw the following:

Perhaps what is most surprising to the casual and perhaps those investors who have not dialed into the new way things work due to MELA, is the speed and the degree to which markets react. Note the 1000 plus down day on the Dow Jones Industrial Average (INDU) on 5/18/22.

Of course, things will happen at the speed of light because of the influence of Artificial Intelligence (algos) which disseminate the news and trade the largest portion of stocks and options, thus influencing the markets. Finally, remember that when the markets fall, the economy will falter. That’s because the markets, through their influence on 401 (k) plans, IRAs, trading accounts, and cryptocurrency holdings affect spending patterns which in turn will slow the economy. As a result, investors should remain vigilant for both an acceleration of the downdraft in stocks and what could be a sudden and decisive reversal when the Fed signals that it will once again lower rates and restarts its QE exercise.

As stocks continue to fall bond yields are following suit. That’s because the bond market is confirming the stock market’s assessment of the current economic situation—a possible recession. Now here’s what’s interesting, the major banks, who are still living in the past, are pricing in a recession in 2023. But, as we’ve already seen, we’ve already had one quarter of contracting GDP.

In other words, if the current quarter delivers a negative GDP number, then by definition—two consecutive quarters of GDP contraction—we will be in a recession.

So, here is the bottom line with regard to bond yields. If TNX breaks below 2.75%, expect a potential cascade of events, such as a possible stock rally and an eventual reversal in Fed policy, which would likely juice stock prices higher.

VIX Rolls Over as NYAD Flattens Out

There may be a temporary pause in the selling in the next few days. But, there doesn’t seem to be enough panic in the market to suggest that stocks will turn up for an extended period of time. However, it is plausible that we may see shares bounce around recent levels for some time as the market digests its recent decline. 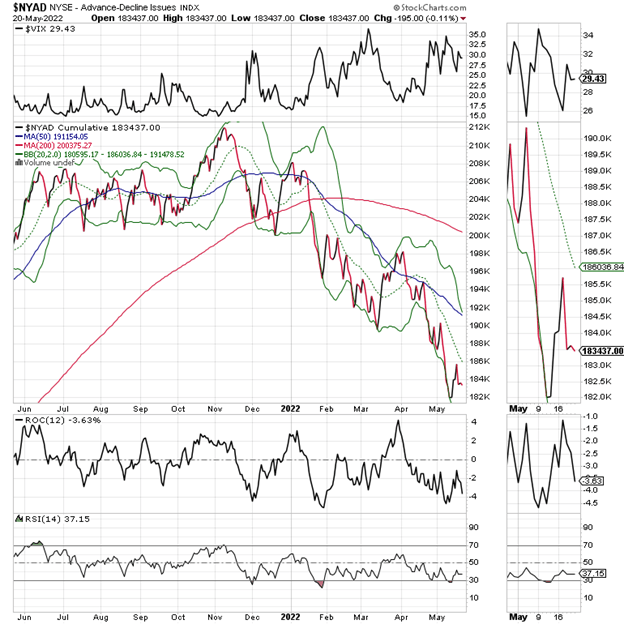 The Nasdaq 100 (NDX) remains well below what was key support at 13.000, which now becomes a key overhead resistance level. So as with SPX, this index is going to take some time to recapture its gains.

MoneyShow
1.24K Followers
MoneyShow — an industry pioneer in investor education since 1981 — is a global, financial media company, operating the world's leading investment and trading conferences. Each show brings together thousands of investors to attend workshops, presentations and seminars given by the nation's top financial experts. The company also offers exclusive seminars-at-sea, with the investment industry's leading partners. In addition, MoneyShow operates the award-winning, multimedia online community, Moneyshow.com and publishes free Investing and Trading newsletters, which provide individual investors with exclusive ongoing access to the latest investment and trading ideas from the nation's most respected and trusted financial newsletter advisors.
Follow
5 Comments