Over the past year, Starbucks (NASDAQ:SBUX) share price has fell by over 30% and is now trading at a P/E of ~20, a historically low level for Starbucks. As a value investor, this has inevitably gotten my attention as Starbucks is a strong business with an extremely wide moat through its superior brand loyalty competitive advantage. In this article, I will elaborate on five main considerations for Starbucks as well as my own analysis and opinions on them. I hope that my pointers will be able to provide both bull and bear investors with a different insight on Starbucks as an investment.

One of the greatest macroeconomic concerns today is rising levels of inflation. For the past three months, annual inflation rates in the US have exceeded 8% and this is a level not seen since the 1980s. As a business that procures ingredients and requires staff to operate, Starbucks will inevitably be hit.

Their main source of inflationary pressures would come from coffee beans. With the exception of Starbucks Reserve products, Starbucks’ coffee beans are not home grown. They are sourced globally from regions such as South America and Asia Pacific, brought to their roasting centers then distributed across their stores globally. Currently, Starbucks has five roasteries in the US, one in Amsterdam and China each.

Not immune to inflation, prices of coffee beans have more than doubled since 2020 and has surged to the highest level in the past ten years. This is driven by two key factors:

Given that Starbucks needs to transport the bulk of their coffee beans twice (from the source to the roastery, and roastery to the store), this will drastically increase their cost of goods sold. Inflation has already shown to be causing a problem at Starbucks, with the company planning to raise prices again, a third hike since October 2021. Despite its pricing power, Starbucks has still been unable to keep up with rising input costs as shown by deteriorating gross margins in the past years. Excluding the COVID dip, Starbucks now has the lowest quarterly gross margins in the past ten years and this trend is expected to continue downwards. 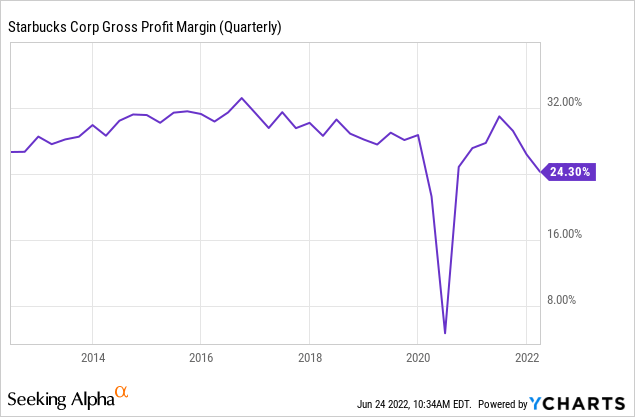 While inflation will eventually pass, its effects are expected are unlikely to dissipate so soon. According to Kona Haque, a lead researcher at ED&F Man, this issue is “something that (they are) going to be factoring in for the next couple of years.”

Therefore, investors should place their focus on the inflationary impacts to Starbucks’ cost structure and factor a medium-term impact to their cost and margin estimates. Since we are unable to ascertain the trajectory of inflation, investors should also consider the worst-case scenario for inflation before initiating a position

With rampant inflation, the next worry on investors mind would be an impending recession. This would be detrimental to Starbucks as they are a consumer discretionary company, who’s products are considered a “luxury” item to most consumers. These products are usually worst hit during a recession. I have two perspectives regarding this issue.

First, bulls believe that Starbucks today is much better positioned to weather an economic downturn than in 2008 due to stronger customer loyalty and the fact that a morning coffee is now a daily routine for many. I partially agree with this sentiment. According to research, it does reveal that fancy coffee such as Starbucks could have significant levels of resistance in a recession as coffee is now considered an affordable luxury, and one that is cheap enough to enjoy during a recession (e.g. compared to vacations or buying new gadgets). Credit Suisse analyst Silberman also argues that Starbucks is in a better place now as its “loyalty program and greater data are both powerful tools to reaccelerate and maintain momentum.”

However, I note that the statement by Silberman was in 2020 and much has changed since then. Today, Starbucks will likely be doubly hit by both rising prices and a recession. In this case, consumers no matter how loyal, could start to become outpriced by their favorite morning coffee house. Additionally, while Starbucks still racks a high customer loyalty of 77% according to comparably, this still leaves a significant 23% that could start to reduce or cut off their Starbucks intake.

Statistically, ICO also notes that a 1% contraction in GDP would correlate with a 0.95% fall in coffee demand and this would be larger for luxury coffee chains as consumers start to scrimp and save more. Hence, if we estimate a 4%-5% dip in GDP which was similar to the previous recession, a minimum 3.8% - 4.75% fall in demand for Starbucks could be expected. This figure could also be worse if the recession is prolonged or if luxury chains indeed bear the brunt of this decline.

Therefore, unlike the bears, I believe that Starbucks would unlikely face a drastic collapse in the face of a recession. However, unlike the bulls, I do foresee that revenue will take a slight dip should a recession emerge and this will be accompanied by thinning margins due to the first consideration on inflation. Twin troubles of inflation & recession will likely bring negative sentiments around Starbucks share price and I believe that would be a much more attractive time to relook Starbucks’ investment value proposition.

As the largest coffee house chain in the world, Starbucks is starting to experience the law of large numbers where it can no longer maintain a high growth rate through rapid store expansion. While Starbucks store count continues to increase by 1000+ stores per year, a growing denominator means that this growth rate percentage wise will continue to decrease moving forward.

Additionally, the global coffee house market is also slowing, with only a 3.5% CAGR expected from 2021 to 2027. This will hurt Starbucks’ growth prospects as global coffee house demand is nearing a peak. As a market leader, it would also be difficult for Starbucks to grow through market share expansion.

This has been reflected in Starbucks’ slowing revenue growth rate. Consequently, with growth rates in the low tens of percent, Starbucks should no longer be considered a growth company unless they can reignite their growth engines, and this means that they do not warrant a premium price multiple anymore.

However, there is still potential for growth for Starbucks. First, there are still numerous territories around the world in which Starbucks has yet to have a strong foothold in. Strong expansion in these regions could mitigate falling store count growth rates.

Second, Starbucks can grow by increasing comparable store sales. This can be done via loyalty programs that increases the average customer spend, as well as a focus on take a way which will allow each store to increase turnover rates beyond their sitting capacity. As a wild card, Starbucks has also started to pilot automated stores and this could be a growth driver in future.

I believe that Starbucks has exciting avenues for growth but given how things stand now I would expect a decreasing growth rate in the foreseeable future hence will not be interested in purchasing at premium multiples.

Next, Starbucks has traditionally been very reliant on CEO Howard Schultz. His return earlier this year marked his third stint at the company. Notably, Schultz tenure has always coincided with inflection points for the company. In his first stint from 1986, Schultz essentially built the Starbucks brand we know today and strategically helped the company expand to become the most dominant coffee house in the US. In 2008, Schultz returned as Starbucks share price crashed by over 75% during the GFC and was facing deteriorating product and service quality due to rapid expansion. Today, Schultz is back as Starbucks faces increasing macroeconomic pressures and a growing unionization movement.

Schultz today is essentially synonymous with Starbucks. While this is not necessarily bad, it does suggest that Starbucks has problems in finding a suitable successor as they always require Schultz’s reappearance to tide the company through tough times. At 61, Schultz can no longer be Starbucks’ savior every time should a future CEO mess up or retire again. Hence, I will be looking closely on Starbucks’ succession plan this time around to see if the next leader has a strong track record and similar ideologies as Schultz on how Starbucks should be run.

Finally, unionization is another large overhanging issue for Starbucks which has accelerated in the past month. Since late August 2021, over 200 Starbucks stores in the US have filed to unionize. While this is a small number compared to Starbucks tens of thousands of stores in the US, poor handling of this situation could lead to a snowballing effect.

Starbucks in turn has responded by raising average hourly wages to $17 and Schultz announced a suspension of their share buyback program to invest in staff and cafes among other initiatives. However, some union movements are unfazed by these changes as they are focusing on issues such as “just cause firing, stronger health and safety policies, and allowing customers to tip with credit cards”. Additionally, some analysts have also expressed discontent as Starbucks’ pulling back on their share buybacks hurts shareholders’ value.

I believe that unionization is a very complicated issue for investors to understand from the outside as there are many intricacies and decisions that will remain unknown for a long time. It is also difficult to factor in potential increases in costs from either unionization or improved staff benefits as many of these issues are still not ironed out as of today. Hence, I would personally rather be on the sidelines until more concrete plans surrounding unionization and workers benefits take shape.

Finally, I would also like to offer an alternative viewpoint that increasing worker benefits could potentially lead to long term benefits for Starbucks. This is because Starbucks is a service based business, and satisfied staff would lead to better service and consequently happier consumers. A Brookings study also revealed that unions can increase worker retention and reduce costs associated with constant hiring and training of new staffers. Additionally, better workers' rights would also improve Starbucks’ ESG standings and this will open the company up to the growing trend and capital movement into positive ESG stocks.

Historically Cheap But I Would Wait On The Sidelines

At a P/E of 20, Starbucks is trading on the lower band of its historical valuation. However, given that Starbucks has numerous near-term and longer-term headwinds facing the business coupled by a slowing growth rate, I believe that this valuation is justified. When comparing to the historical PE of other global chain restaurants, Starbucks today is also trading in line with their historical average PE multiples.

In all, I believe that Starbucks is still a very solid company with a strong business model and competitive advantage that cannot be replicated easily. However, I do not see Starbucks as a value play in today’s market and believe that its valuation today is justified. I would personally sit on the side-lines with Starbucks until I have greater clarity on the considerations which I have listed above, or if Starbucks’ stock price continues to fall to a level that has priced in more than a bear case scenario. While I do not like or advocate timing a stock, I do believe that should a recession arrive, Starbucks’ shares could see stronger selling pressure then, and that could be a better opportunity to relook the stock.