Bristol-Myers Squibb (NYSE:BMY) is a large-cap, long-established pharmaceutical company that has been struggling to show revenue growth. I believe it is in a good position to become a growth company again, though there are risks to that scenario. This article will analyze Q2 2022 results with an eye to what they say about future growth. It will also cover a couple of 2022-2023 likely events that could help with growth. Every research-oriented pharma company faces the same dilemma: it costs a lot to develop new drugs, but failure in that endeavor means revenue will decline as older drugs go off-patent. However, patent lives of older therapies will only be mentioned in passing in this article. 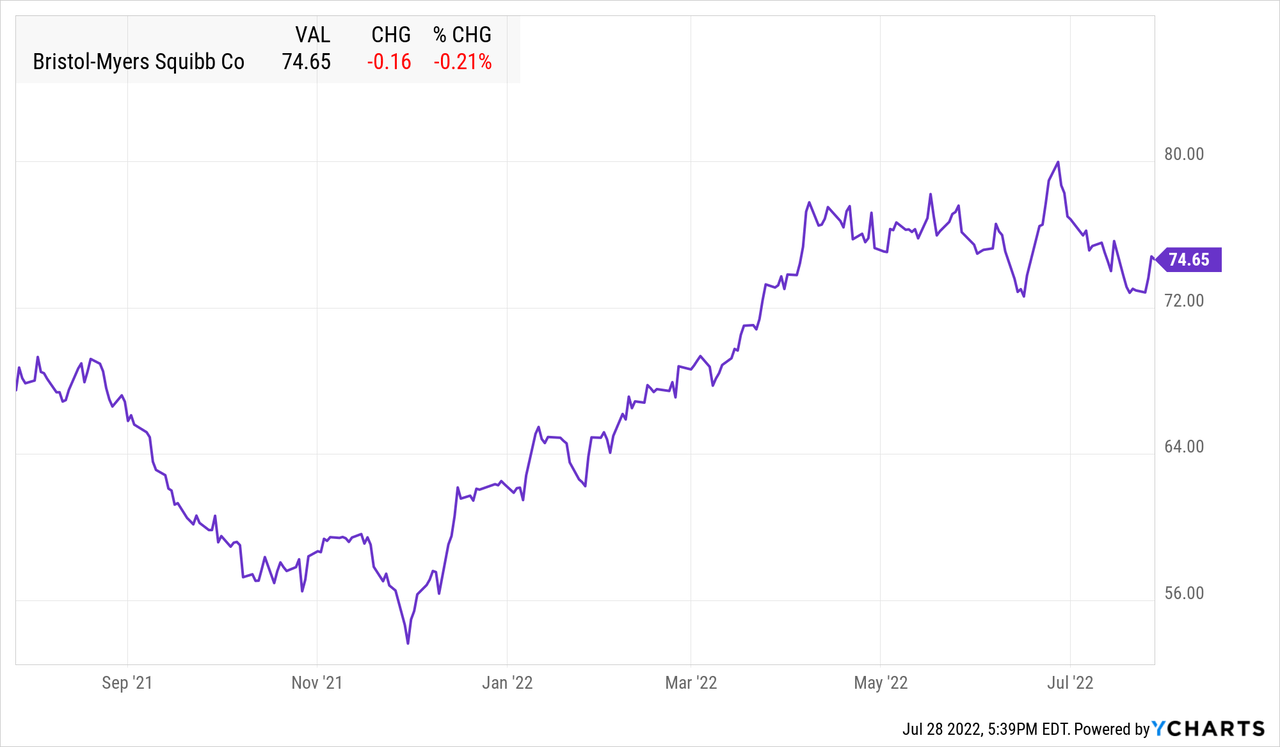 Bristol has a lot of cash, but more debt. At the end of Q2 the cash and equivalents balance was $13.2 billion, while long-term debt was $37 billion. Cash flow from operations in the quarter was $2.3 billion, so servicing the debt should not be a problem. During Q2 Bristol repaid $2.9 billion of its debt but used no funds for stock repurchases despite a remaining $10 billion authorization. The main possible use of cash is likely to be to acquire rights to therapies or to make acquisitions, as is planned with Turning Point Therapeutics. That deal should close in Q3.

Starting with the bad news, Bristol has several drugs or therapies that are encountering competition, including from generics and biosimilars. Table 1 shows the most important of these.

The Other category includes a variety of drugs described by the company as mature. Revlimid is used to treat multiple myeloma and myelodysplastic syndromes, while Abraxane is used to treat a variety of solid cancers. Empliciti is another multiple myeloma therapy. The Revlimid decline has been long anticipated, so is likely built into the stock price.

The good news is the number of drugs that are still ramping sales is much larger than the number in decline. However, some of the largest revenue generators may be approaching peaks, and both Opdivo and Eliquis have a limited horizon before their patents expire. In addition, there are now several PD-1 inhibitor competitors to Opdivo on the market.

I think the products to watch most closely going forward are in the lower half of the table: Zeposia, Onureg, Breyanzi, and Abecma. Zeposia (ozanimod) is an immune modulator approved in 2020 for treating multiple sclerosis and in 2021 for ulcerative colitis. It is also in a Phase 3 trial for Crohn’s Disease. It was acquired with Celgene. It has an advantage in being administered orally, but the field of immunological therapies is crowded. It should continue to ramp revenue as patients with these types of diseases often are willing to try a newer therapy to see what works best for them.

Breyanzi is a CAR-T therapy approved by the FDA in February 2021 for treating B-cell lymphoma. It came to Bristol with the acquisition of Celgene, which in turn had acquired it with Juno Therapeutics. CAR-T therapies involve genetic manipulation of T cells; they are expensive to manufacture and expensive to payers, but highly effective for some patients. The label could be significantly expanded if trials for Chronic Lymphocytic Leukemia, Marginal Zone Lymphoma, and Follicular Lymphoma produce positive results. Currently Bristol is at the limits of its manufacturing capacity for Breyanzi. Since it sees high demand for the treatment, it is expanding capacity, but the timeframe for that is Q1 2023. So, it may have nearly flat sequential revenue in the second half of 2022. Nevertheless, Breyanzi and other cell therapies should be a major growth area for the rest of the decade.

Abecma, like Breyanzi, is a CAR-T therapy, also acquired with Celgene. It was approved by the FDA and EU for treating Multiple Myeloma in 2021, but only for patients who have tried four more standard types of therapy. It could see considerable label expansion as it goes through clinical trials for earlier lines of Multiple Myeloma. Over time I see it as a major contributor to Bristol’s revenue.

In addition to the therapies just discussed, Bristol has two high-potential therapies that have already received their initial approvals from the FDA. Opdualag is a combination of Opdivo and relatlimab, an anti-LAG-3 antibody. Opdualag was approved by the FDA in March 2022 for treating unresectable or metastatic melanoma. Opdivo has long been used in this indication, but clinical results showed Opdualag gave substantial improvements over the monotherapy. Opdualag had $6 million in sales in Q1, then jumped to $58 million in Q2. While this might cannibalize some Opdivo sales, it also helps in competition with other melanoma therapies and Opdualag has a very long patent-protected life ahead of it.

Camzyos (mavacamten), which received FDA approval in April, is a cardiac myosin inhibitor used to treat obstructive hypertrophic cardiomyopathy. It has orphan drug designation. It is also in trials for other versions of cardiomyopathy and for heart failure. Positive topline results for OHC patients eligible for septal reduction were reported in February. Given the severe effects of the disease, and the number of people suffering from it (about 1 in 500, including all varieties), this could be another large revenue generator. It generates just $3 million in revenue in Q2, but could ramp quickly as it gets reimbursement approvals.

Deucravacitinib is possibly the next big revenue generator. It has an FDA PDUFA or decision deadline of September 20, 2022, for moderate to severe plaque psoriasis. This is currently a very competitive indication, but also one with large potential revenue. Regulatory applications have also been made in the EU and Japan. Since Deucravacitinib is a type of janus kinase inhibitor, and that class of drug has received black box warnings, there has been a concern that the FDA will include one in its label. The company position is that the data from the trial show sufficient differentiation from other kinase inhibitors to avoid the warning and generate strong demand. Label expansion could be considerable, with trials currently underway in psoriatic arthritis, lupus, Crohn’s, ulcerative colitis, and discoid lupus. We will know more in September.

On the Q&A portion of the Q2 Bristol-Myers conference call analysts seemed most interested in Milvexian, which reported positive topline Phase 2 results and will soon be reporting complete data at a science conference. The Phase 3 trial should start by year-end. Milvexian is a FXIa inhibitor for preventing venous thromboembolism and secondary strokes. It could help generate revenue to replace that being lost when Eliquis loses patent protection.

To fully appreciate the long-term growth potential of Bristol, investors need to study the pipeline of potential therapies. This includes over 50 compounds in development targeting over 40 disease indications.

While there is no guarantee that revenue ramps from newer drugs will surpass the declines expected from drugs seeing competition, Bristol-Myers seems primed for becoming a growth company again. It is not easy to replace a major revenue generator like Revlimid, but the CAR-T therapies together with Deucravacitinib would be a strong start. Bristol-Myers has also promised continued dividend growth and share repurchases. Cash generation remains strong, allowing for acquisitions that could help ramp revenue and profits in the future. Qualitatively, I think it is likely the company will return to a more substantial rate of revenue and profit growth. Given a P/E (fwd) of just about 10, I see Bristol-Myers Squibb as undervalued, and perhaps substantially undervalued if Deucravacitinib gets approval in September and then has a strong launch.

In addition, there is some danger from potential reform of prices Medicare is willing to pay. Bristol management minimized this threat, pointing out that nothing has been finalized. The most likely current proposal would affect pricing of a couple of Bristol’s best revenue generators, but those drugs are already seeing revenue decline, or will be losing patent protection around the time such a law might take effect. Management may be too optimistic on this score, but the solution to the problem is to bring new drugs to market, which is the goal regardless.

William Meyers
6.5K Followers
I provided stock and bond research and analysis to a small cap specialist investor, Lloyd Miller, from 2002 until his death in January 2018. For my own account I invest mainly in technology and biotechnology stocks. My technology and investment web site is openicon.com, where readers can view the notes I take to make decisions and to write articles for Seeking Alpha.
Follow

Disclosure: I/we have a beneficial long position in the shares of BMY either through stock ownership, options, or other derivatives. I wrote this article myself, and it expresses my own opinions. I am not receiving compensation for it (other than from Seeking Alpha). I have no business relationship with any company whose stock is mentioned in this article.