This article was coproduced with Mark Roussin.

Warren Buffett has largely invested in dividend-paying stocks with growing cashflows over the years.

Cashflow has been a major focus and a must have for a company to earn his investment over time, but the other major rule he has revolves around his familiarity with the business.

Not that he does not understand the business of Real Estate, but one sector he has kept his investments to a minimum has been within the real estate investment trust ("REIT") sector.

Thus, when Warren Buffett makes an investment in a REIT, people should take notice because it does not happen all that often.

When you look at the wealth that has been amassed by billionaires across the globe today, one common thing you will find in a lot of their stories is how much they earned through investing in Real Estate.

Real estate has played a vital role in many billionaires’ path to becoming financially successful. Here is an excerpt from the 2020 PWC Billionaires Report:

I have interviewed dozens of billionaires over the years, and I have found that this elite class of the wealthiest in the world seeks real estate because of its tax advantages that provide enhanced depreciation benefits (i.e., cost segregation) as well as principal preservation attributes (i.e., 1031 like-kind exchanges).

In the PWC survey, it was found that during 2020, approximately half of all billionaires, regardless of the business sector they originate from, have between, 21-40% of their net wealth invested in real estate.

Charlie Munger, Warren Buffett’s longtime partner, is one of those billionaires that has benefitted by investing in real estate over the years, but this has never been a path that Warren Buffett has directly taken.

That is until he started investing in REITs...

A REIT Fit For An Oracle

In 2017, Berkshire Hathaway (BRK.A, BRK.B) invested $377 million into STORE Capital Corporation (NYSE:STOR), which at the time represented a 9.8% stake in the real estate investment trust. This investment equates to roughly 18.6 million shares. The cost basis at the time was $20.25.

Today, shares of STOR are trading at $28, suggesting those shares have increased roughly 35%.

In 2020, the Oracle of Omaha yet again added to his STOR position by purchasing an additional 5.8 million shares after the large COVID pullback, which brought his total shares to 24.4 million.

As of today, Berkshire owns 14,754,811 shares which have a market value of $415.2 million, which is still only a small sliver of the entire BRK.B portfolio, but it is the only REIT within the portfolio currently.

Here is a look at the transactions Buffett has made when it comes to STOR.

What Has Intrigued Buffett About STORE Capital?

STORE Capital went public in 2014, so it is still relatively new to public markets. The company is a net-lease REIT with a focus on the middle-market property sector.

According to former STORE Capital CEO Chris Volk, Warren Buffett studied the REIT for three years before taking a position. This goes back to Warren Buffett’s rule of understanding the business before investing.

This unique approach to focus not only on investment grade tenants, but also middle-market tenants is what intrigued Mr. Buffett.

STOR has a diversified portfolio with over 3,000 properties, which has grown 18% over the past two years as the company continues to expand. The portfolio is leased out to 579 different customers within 124 industries.

The other interesting component curtails around sales-leaseback transactions, which is common in STORE’s transactions. This is often a common misconception of many investors not familiar with the term or process.

Simply put, a sale-leaseback transaction allows owners of real estate to free up capital they have tied up in a real estate asset. The current owner can sell the asset to the buyer, and then the buyer turns around and leases the same property back to the seller, who can now continue using the same asset without having to disrupt operations.

In addition, the seller was able to free up capital for other things while the purchaser owns an immediately cash-flowing asset.

This allows STOR to gain a solid understanding of not only the current health of a company, but also their future plans ahead, which puts the landlord in a unique position before choosing to close on an acquisition.

STOR recently reported their Q2 financials, which came in above analysts' expectations. The company reported total revenues of $223.8 million, which was an increase of 16.5% from the same period a year ago. Through the first half of the year, revenues are up 19.1%.

AFFO for the quarter came in at $0.58 per share, an increase of 16% from prior year. The company continues to consistently increase its AFFO on an annual basis, which feeds into the growing dividend we will look at below.

As of June 30, 2022, the portfolio’s annualized base rent and interest totaled $908 million. STOR's occupancy ratio totaled 99.5% at the end of Q2 2022 with an average non-cancelable remaining lease term on these properties was 13.2 years.

The increase in revenue was backed by continued expansion seen from the acquisitions team, which acquired another 62 properties in the quarter originating $391.9 million of gross investments during the second quarter of 2022. These origination and other activities resulted in the creation of 11 new customer relationships. The investments had a weighted average initial cap rate of 7.2%.

STORE’s leases have annual lease escalations built into the lease agreement, most of which are tied to the consumer price index and subject to a cap. As many of you know, CPI has been running extremely hot meaning this is a tailwind for rent step ups in 2022.

In terms of dispositions, the company sold 24 properties, recognizing a net gain of $19.7 million during the quarter.

Similar to its direct competitor in Realty Income (O), STORE Capital has a very diverse portfolio. The largest exposure the company has to a top tenant is only 2.9% and the top 10 tenants make up 17.7% of total base rent.

Here is a look at the top 10 tenants and industries.

Many other net lease REIT competitors have a different approach to its top tenants, which again makes STOR a little different and unique to others.

With this comes higher lease spreads, but also higher risk as well. As we saw during the COVID pandemic, STOR rental collections were roughly cut in half for a short period, so do understand the risks before investing.

Here is a look at how the portfolio is split up:

When the economy is performing well, outside the pandemic, STOR is set up to greatly benefit due to its large leasing spreads when compared to its peers.

Buffett Loves Him A Growing Dividend

The REIT structure often leads to higher yields than non-REIT dividend stocks. Investing in STOR has rewarded investors nicely over the years with a consistently growing dividend that has been well-covered by adjusted funds from operations ("AFFO").

Since going public, STOR has increased their dividend at an average annual rate of 5.9%, trailing only one of its peers in ADC over that time span.

However, the growing dividend combined with superb results has actually lowered the payout ratio over the years, further strengthening the reliability of the dividend. AFFO results outpacing dividend growth leaves plenty of room for future dividend growth.

I fully suspect we will hear a new dividend increase announcement next month, marking the eighth consecutive year the company has upped the dividend.

Wonderful Company At A Wonderful Price

On the year, shares of STORE Capital are down nearly 20%, but over the past two months, STOR shares have been on the move, climbing 15% during that time span.

Shares have been under pressure since the abrupt departure of former co-founder and CEO Chris Volk at the end of 2021. He was a fantastic leader and brilliant mind during his time leading the company, but now the reins have been turned over to co-founder Mary Fedewa.

Investors were suspect of the departure by Mr. Volk, as that was a major reason behind my own investment a few years back, but the recent earnings beat has reassured investors that the company is still in good hands.

As it stands, shares of STOR currently trade hands at a P/AFFO 12.6x, which is well below their five-year average of 16.9x.

The cheap valuation combined with favorable growth prospects, even after the stock’s performance the past few months, make shares of STOR look like a very reasonable BUY in my eyes.

STORE Capital is a top net-lease REIT that has been performing quite well here in 2022 under the new leadership of co-founder Mary Fedewa. Revenues continue to grow at a healthy pace behind rent escalations and continued acquisitions.

The portfolio continues to expand and is well diversified with the largest tenant making up less than 3% of annual base rent.

The bears had their doubts when former CEO Chris Volk left the company entirely at the end of 2022, and for good reason considering how well the company performed under his leadership. However, Mary Fedewa has proven to be effective as well in her short stint at the company’s new leader in 2022.

Buffett has seen a nice return on his shares in a short period of time and remains invested in the REIT. Anytime you get the stamp of approval from Warren Buffett and the Berkshire team, it is usually a good thing.

At iREIT on Alpha we rate shares of STOR a BUY.

Note: Chris Volk is now a guest contributor at iREIT on Alpha. Here is a link to his latest article. 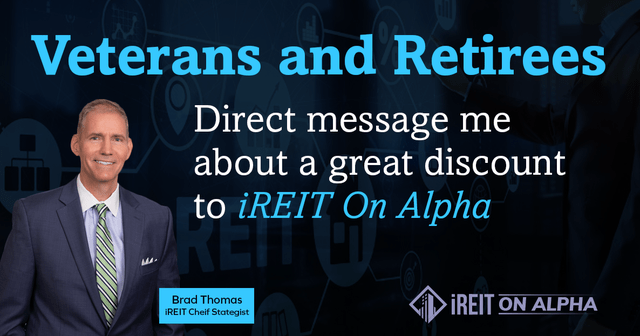 Disclosure: I/we have a beneficial long position in the shares of STOR, O, NNN either through stock ownership, options, or other derivatives. I wrote this article myself, and it expresses my own opinions. I am not receiving compensation for it (other than from Seeking Alpha). I have no business relationship with any company whose stock is mentioned in this article.