A few years ago, we were in the race for the trillion-dollar market cap milestone. This was achieved by the likes of Apple (NASDAQ:AAPL), Microsoft (MSFT), Alphabet (GOOG) (GOOGL), and Amazon (AMZN). It is no secret that the tech giants dominate Wall Street's trillion-dollar club, and for good reasons. These trillion-dollar companies have two things in common; 1) they have fortress, cash-rich, balance sheets and 2) they generate tremendous amounts of cash flows from operating activities.

Even though it sounds stretched, the next major milestone is reaching a market cap of $5 trillion. I believe that Apple is extremely well positioned to join that club. Right now, Apple's market cap is ~$2.7 trillion, but for a brief time during intraday trading on 3 January 2022, the iPhone maker became the world's first $3 trillion company, surpassing the $182.85 per share it needed to be worth $3 trillion at the time. To put this into context, $3 trillion is larger than the GDP of most countries, including G7 countries like the United Kingdom (GDP $2.67 trillion), France (GDP $2.63 trillion), Italy (GDP $1.89 trillion) and Canada (GDP $1.64 trillion). Apple has a tendency to break records. In fact, it was the world's first trillion-dollar market cap company as well as the first U.S. company to reach a $2 trillion market cap valuation (Saudi Aramco became the world's first company to reach $2 trillion market cap when its shares debuted on the Riyadh stock exchange in 2019). I wouldn't be surprised if Apple also achieves the status of the world's first $5 trillion, or even 10 trillion-dollar, market cap company.

So far this year, the markets have been in manic-depressive mode. Market sentiment is poor and the general market indices have come under intense pressure, and for good reasons. In addition to decades-high inflation, aggressive interest rate hikes, severe logistic/supply chain disruptions, ongoing COVID-19 issues, the 2022 monkeypox outbreak, and the war in Ukraine, we also have concerns about Taiwan, after Pelosi's visit to the island. In June, the S&P 500 entered bear market territory, as it dropped more than 20% from its highs, for the first time since March 2020 (the early days of the coronavirus pandemic). The good news is that sentiment has started to improve as of July. In fact, July was the best month since 2020. Momentum is continuing into August, especially after the news that U.S. inflation somewhat eased in July to 8.5% (down from a 9.1% year-over-year jump in June). Also, wholesale inflation fell 0.5% due to a slide in energy prices, another sign that prices increases are slowing. Better inflation data sparked a global stock market rally.

On a year-to-date basis, Apple has outperformed all major U.S. market indices as well as its aforementioned one trillion-dollar club tech peers. 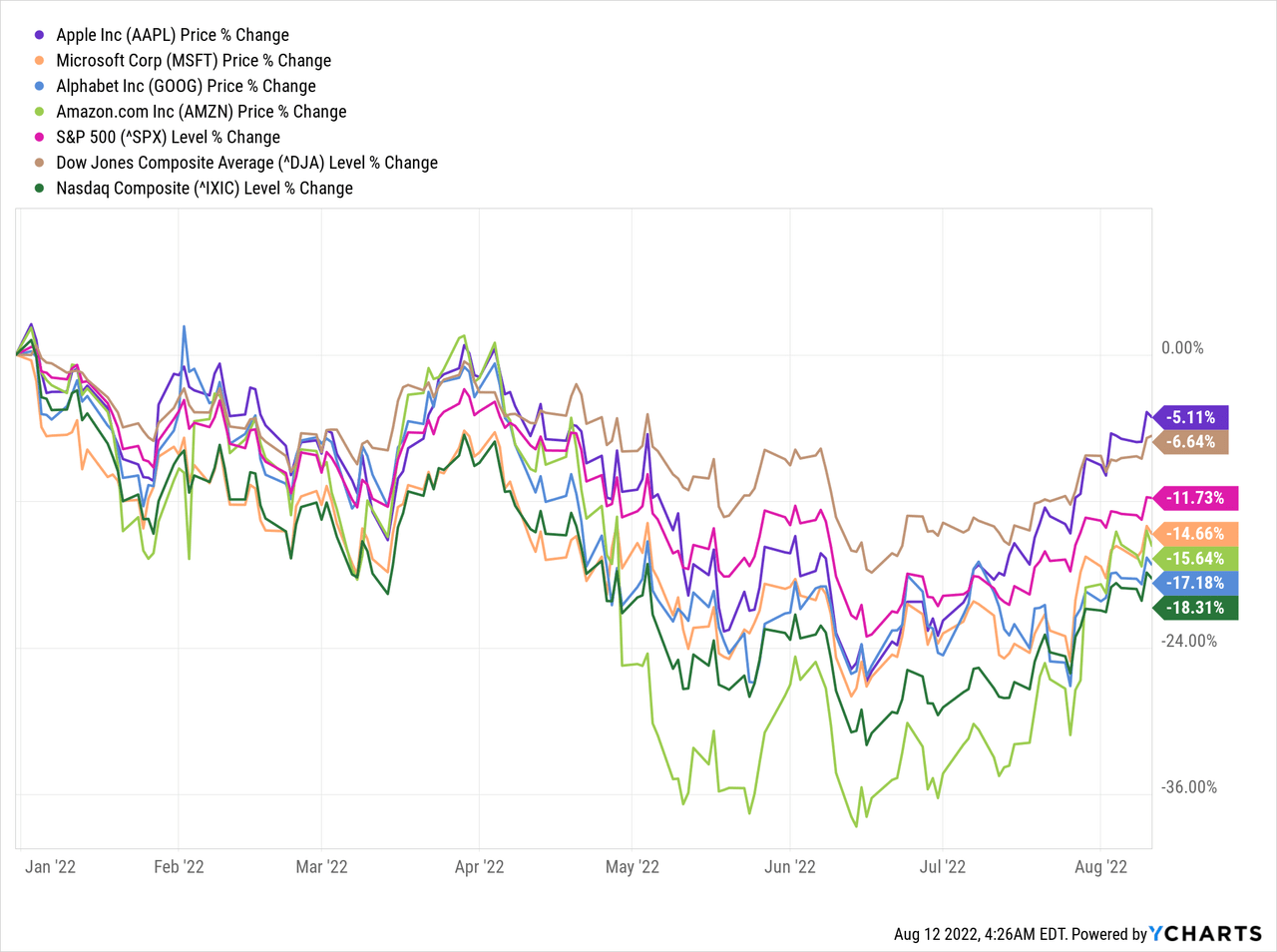 Specifically, Apple is down 5.11%, significantly outperforming the tech-heavy Nasdaq and S&P 500, which are down 18.31% and 11.73%, respectively, and is also slightly ahead of the Dow Jones, which is 'only' down 6.64%. What's more, Apple has also outperformed it tech peers by a very wide margin, as they have also suffered double-digit percentage drops.

Regarding Taiwan, House Speaker Nancy Pelosi visited the island recently, becoming the first U.S. lawmaker to do so since 1997. This is adding further pressure to the already strained U.S.-Chinese relations. As a preemptive move, Apple asked its suppliers to follow China's rules, relabeling shipments from Taiwan to China, to avoid scrutiny. Specifically, according to the Japanese news outlet Nikkei, citing sources familiar with the matter, Apple asked suppliers to label the shipments as being made in "Taiwan, China" or "Chinese Taipei." The reality is that Apple has significant exposure in East and Southeast Asia, as a manufacturing hub for its products, and Taiwan has traditionally been one of Apple's top suppliers, mostly due to Foxconn which is headquartered in Taipei (Taiwan) and is one of Apple's oldest and largest suppliers. Other Taiwan-based suppliers include Wistron and Pegatron. In any event, this is not a make-or-break issue for Apple, but certainly a development worth following.

Despite the aforementioned global issues and a challenging operating environment, Apple delivered a great quarter, beating expectations (Apple earned $1.20 per share versus analyst expectations of $1.15 per share). The Company posted a June quarter revenue record of $83 billion, up 2% year-over-year, which in turn translated into nearly $23 billion in operating cash flow. These are very impressive results and operating cash flow never seems to disappoint at Apple (more on this below). This is why Apple has a fighting chance to head towards a $5, or even $10 trillion, market cap. Importantly, during the quarter, Apple's installed base of active devices reached an all-time high in every geographic segment and product category. Not only that, Apple expects that sales should "accelerate" in the current quarter. Apple's resiliency is of no luck. This year marks the 15th anniversary of the iPhone, which set a June-quarter record, and this comes in advance of Apple's historical launch of a new model of the iPhone, which is usually announced in September. It feels that we are just getting started.

As the saying goes, "cash is king". Apple is a king in generating game-changing cash flows, and has the ability to hoard overwhelming amounts of cash on the balance sheet, despite returning massive amounts to its shareholders in the form of both dividends and share buybacks. Specifically, annual cash from operations surpassed the $100 billion mark for the first time in 2021 (came in at $104 billion), and 2022 seems to be faring even better. On a TTM basis, cash from operations has been $118 billion. To put things into context, in 2012 cash from operations was 'only' $50.9 billion. In other words, Apple has managed to double cash from operations over the past decade. This is a remarkable achievement for a company of this size.

The long term trend is clear. Apple has turned into an unprecedented and predictable cash flow machine. And there are no signs of slowing down. For starters, Apple spent $6.8 billion on R&D (Research and Development) in the last quarter alone, up from $5.7 billion compared to the same quarter of 2021. This implies an R&D budget of more than $25 billion on an annualized basis. Based on probabilities, it is reasonable to assume that eventually something big will come out from all these efforts. As such, over the next decade, I wouldn't be surprised if Apple manages to comfortably surpass the $150 billion mark in cash from operations. Arguably, there is still room to grow through its existing products as well as its high-margin, stable and growing services revenues.

Moreover, Apple is constantly innovating and will most certainly come up with new exciting products and engage in transformative M&A activity should an opportunity present itself, by capitalizing on its very deep pockets. All it takes is for a new big hit to move the needle. For instance, Apple still doesn't have a meaningful market share in smart homes or vehicles. I am confident that millions of loyal Apple fans are eagerly waiting for Apple's ecosystem to make a difference in their homes and cars. Some are even waiting for an Apple Car. According to a recent Bloomberg report, Apple poached a 20-year Lamborghini veteran to help lead the design of its future vehicle. This is on top of a series of high-profile hires. Apple has been extremely secretive with its eight-year-long car project (code name "Project Titan"), and many now expect an autonomous car with a launch date of 2025. Reading between the lines, it is virtually impossible that Apple will not deliver something big in the car space, after spending billions and reportedly hiring thousands of people for Project Titan.

So, whether its Project Titan or another exciting product or feature, Apple has the ability and luxury to experiment, due to its financial strength. Apple is currently sitting on an insanely large amount of cash & cash equivalents and marketable securities. Even if Apple throws tens of billions down the drain, its coffers will fill up very quickly, due the aforementioned massive amounts of recurring operating cash flows.

As of 25 June, Apple has more than $175 billion in cash & cash equivalents and marketable securities. To be fair, the company has also borrowed substantial amounts over the past few years, largely to boost shareholder returns, mostly in the form of share buybacks. As of 25 June, total short- and long-term debt is ~$110 billion.

The good news is that it is up to Apple's discretion to hoard more cash, if it slows down its share buyback program. As mentioned above, cash from operations exceeds $100 billion annually. Payments for dividends amounts to ~$15 billion annually. I treat this as a fixed outflow, as Apple will never contemplate decreasing its dividend. It is obvious that Apple will pursue a progressive dividend policy, something I wholeheartedly support. Repurchases of common stock amounted to $65 billion in the 9 months ended 25 June, which equates to ~$85 billion on an annualized basis. In other words, if Apple reduces the pace of buybacks, these "savings" will go straight to the balance sheet, all else constant. In short, it's all about the company's capital allocation policy.

Going back to entertaining the potential $5 trillion valuation, I base this prognosis on a fairly conservative model. In the extreme scenario that Apple doesn't grow at all, it is still cheap today. I always stress test my investments, trying to be prudent. To this end, I assume the following scenario:

As such, over the next 10 years, Apple will accumulate more than $1 trillion in cash, which represents almost 40% of its current market cap. This on its own provides a tremendous margin of safety. However, is it reasonable to assume that Apple will just remain a static company over the next decade? This is the important question investors must ask themselves and, depending on the answer, to allocate capital accordingly. I think Apple is poised for substantial outperformance over the next decade and long term investors, such as Berkshire Hathaway (BRK.B) (BRK.A), stand to benefit tremendously.