Bracing for a deep Europe recession

We think the energy crisis will spur a deep recession in Europe. And the ECB wants to tame inflation without acknowledging the costs.

The energy crisis is driving a worsening outlook. Europe is now spending nearly 12% of its GDP on energy, more than double the U.S. level.

Supply of gas from Russia has been significantly reduced, causing prices to spike. Storage has been built up, but winter weather is still a risk. Gas demand still needs to fall more.

Our view already accounts for natural gas rationing, and we see the energy crisis pushing Europe into a deeper recession than in the U.S. by year-end.

3) ECB yet to flag the growth-inflation trade-off

We see the ECB stopping its hiking cycle sooner than markets expect as it wakes up to this reality, including fragmentation risks.

We think recession risks in Europe are not fully priced into the equity markets.

We’re cautious over a tactical horizon. We underweight European and most other developed market stocks, and we aren’t looking to buy the dip.

We prefer fixed income assets in Europe over equities.

The energy crunch will drive a recession in Europe, as we’ve argued since March. The crisis has worsened since then as Russia has halted gas supplies. Plus, the European Central Bank (ECB) isn’t acknowledging how it will crush activity further by trying to fight high inflation, in our view. We think the ECB will wake up to this reality sooner than markets expect - but not before it inevitably faces a severe recession. We remain underweight equities and prefer high-quality credit.

Notes: The chart shows the cost of oil, gas and coal consumption in the European Union and U.S. as a share of GDP. We use regional energy prices and divide by GDP in U.S. dollars. Data for 2022 are based on IMF’s latest GDP forecasts and the year-to-date average of daily commodities prices.

Europe’s efforts to wean itself off Russian energy have triggered a price surge that’s been amplified as Russia cuts gas supplies. The European Union is now spending nearly 12% of its GDP on energy, making the crisis worse than the 1970s oil shocks. See orange line in the chart. That’s not the case for the U.S., a net energy exporter (yellow line). It’s hard to see any relief for Europe in the next couple of years, with rationing on the horizon, in our view. Winter may cause demand to surge, slashing stockpiles. Countries are rushing to cushion pressure, especially on households. Germany plans to collect excess profits from energy providers and cap prices. EU energy ministers have called for similar policies. The UK has a sizable plan to pay energy suppliers the difference between a new capped price and the price they would have been able to charge.

The euro area policies are much smaller than those in the UK or for Covid-19. That reinforces why the energy shock will drive a protracted recession lasting several quarters in Europe, in our view. The ECB is set to make things worse: like the Federal Reserve, the ECB hasn’t acknowledged the damage it must do to growth to fight this inflation, even after it hiked a record 0.75% last week. The ECB is instead responding to the politics of energy-driven headline inflation, we think. Its new forecast for modest growth next year is already stale by not accounting for recent events like Russia cutting off gas supply. We see the ECB’s downside scenario of a -0.9% contraction as more likely. The euro sliding to 20-year lows against the U.S. dollar reflects deteriorating growth and terms of trade from higher energy prices, in our view.

The ECB will also have to contend with fragmentation risks – and perhaps put into practice its anti-fragmentation tool for peripheral debt spreads. Italy’s economic fundamentals have worsened in this shock, with the shift to a current account deficit amid its heavy debt burden. That’s more likely to feed volatility for Italian bonds, even if the coming election likely results in a center-right government that won’t be very antagonistic to the EU.

We think the ECB will keep up its aggressive rate hikes through the end of 2022, but then stop once it sees the economy taking a major hit. Year-end rates will likely stand somewhat short of current market rate expectations, in our view.

Unlike others, the Bank of England (BoE) has been clear that bringing inflation down to target would require a deep recession. The UK’s fiscal plans wouldn’t change that, in our view. The measures are just another example of governments responding to the politics of high inflation. The subsidies may slow headline inflation and cushion the recession blow in the near term. But they can’t solve the imbalance of low supply relative to demand - and in fact, block the fall in demand required to reduce inflation. Limiting the hit to real household incomes reduces the growth drag the BoE would have expected. That implies the BoE will keep hiking rates to get demand back in line with supply but not as much as markets expect, in our view.

European stocks aren’t priced for the deep recession we expect. Excluding commodities, European earnings growth estimates are too optimistic, we think. We stay underweight European and most developed market stocks. We prefer investment grade credit as yields better compensate for default risk. We’re neutral European government bonds and have a modest overweight to UK gilts, with a preference for short-dated bonds due to markets pricing in an overly hawkish rate path.

Volatility persists across markets - underscoring the new regime of heightened macro volatility. The ECB hiked rates a record 0.75% and cut its growth forecasts last week. Yet, the ECB’s new growth forecasts still don’t reflect the deep recession we expect from the energy shock and higher rates. We see the ECB jacking up rates through year-end but then stopping as the economic toll from the energy shock and rate hikes becomes clear.

The focus this week is on whether U.S. core inflation is slowing further or staying at elevated levels. The consensus sees the core CPI holding fairly steady, up by shelter costs, even if headline inflation likely cools on lower gasoline prices. The Bank of England policy meeting previously set for Sept. 15 has been rescheduled after Queen Elizabeth’s death. 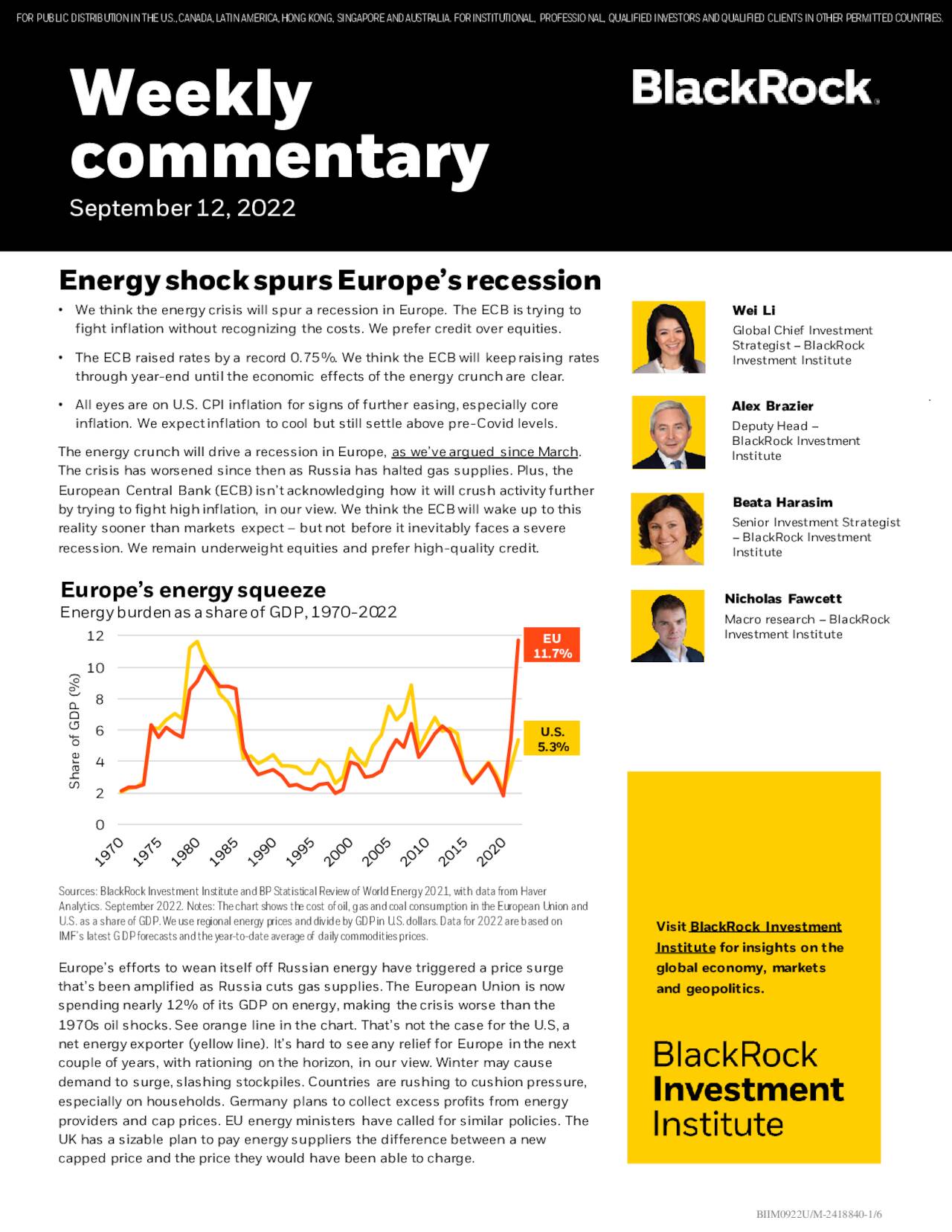 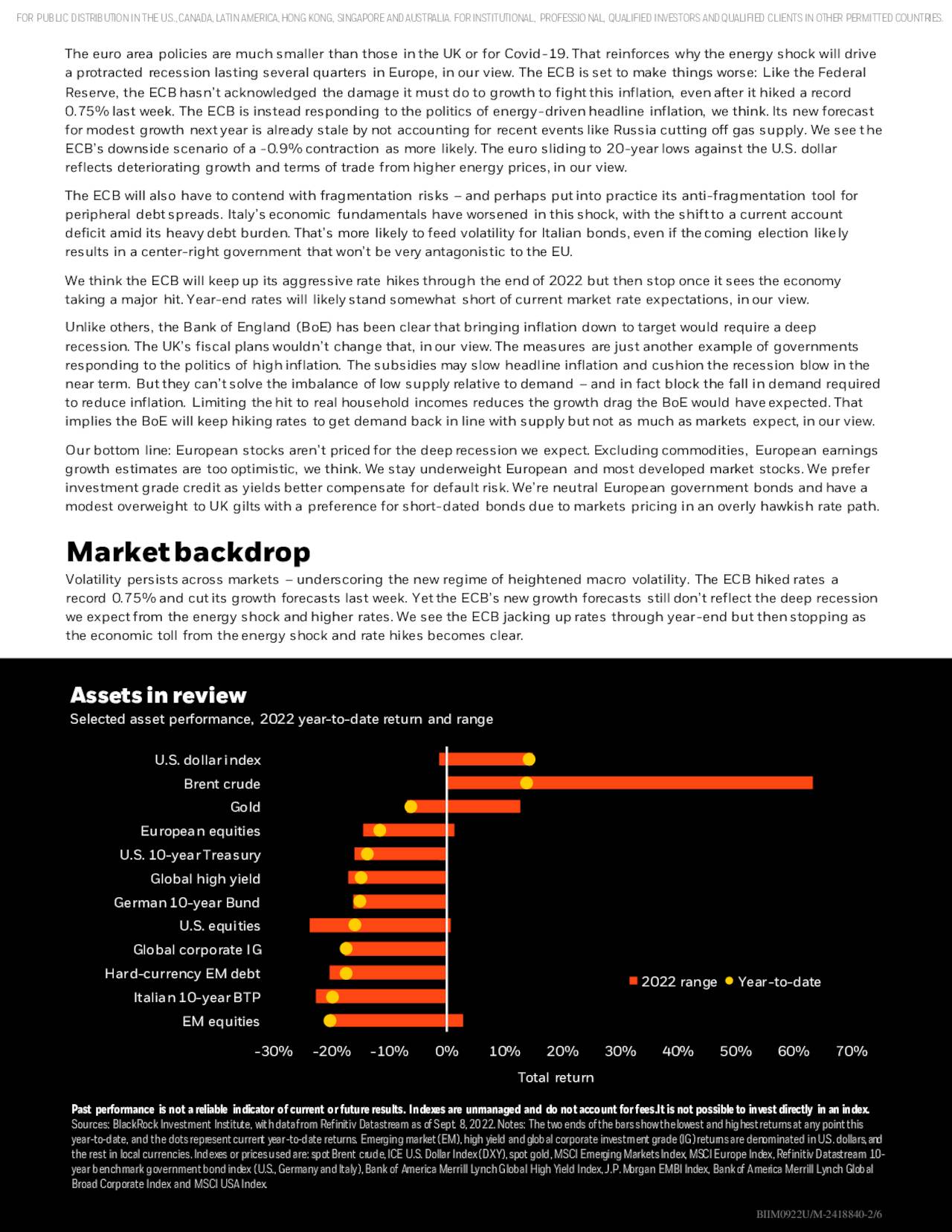 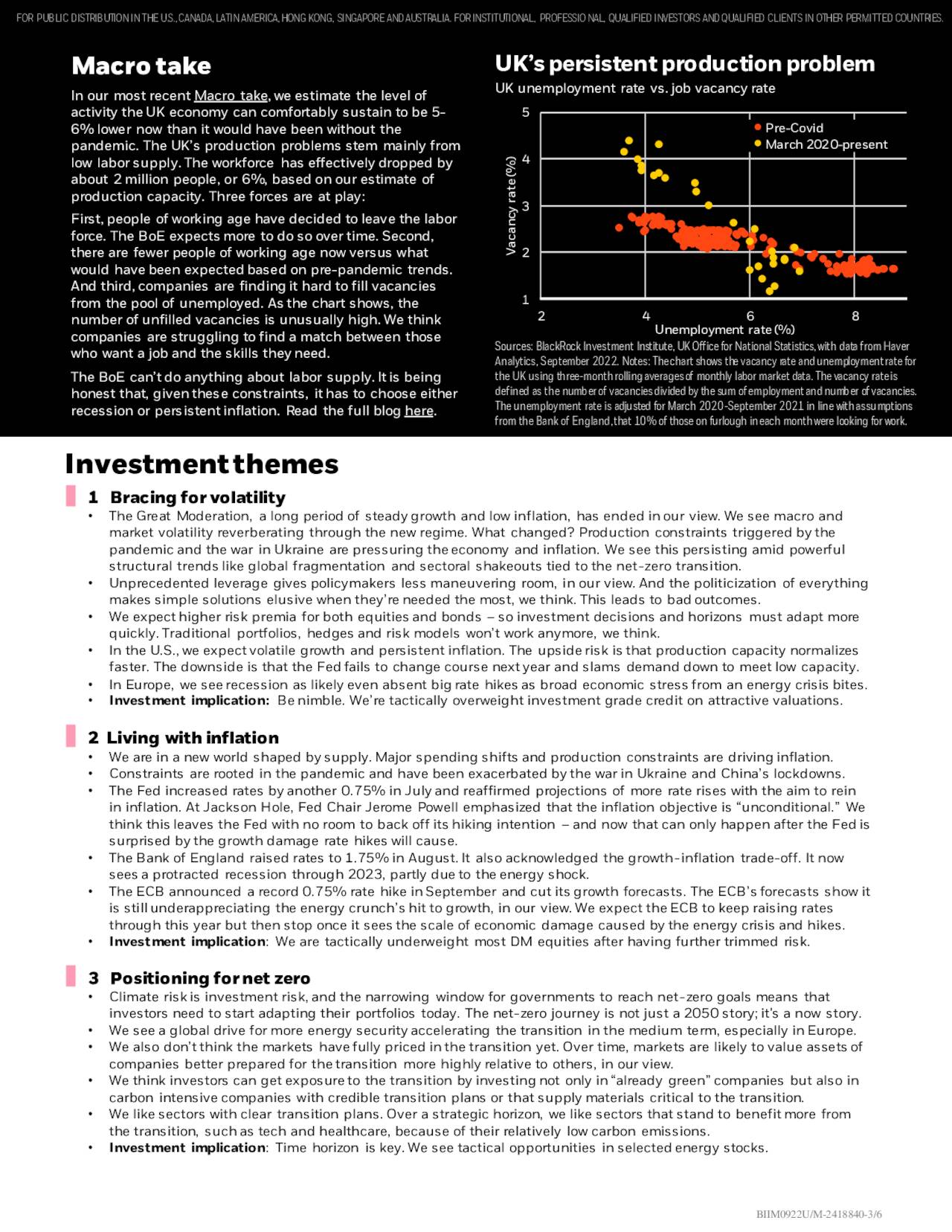 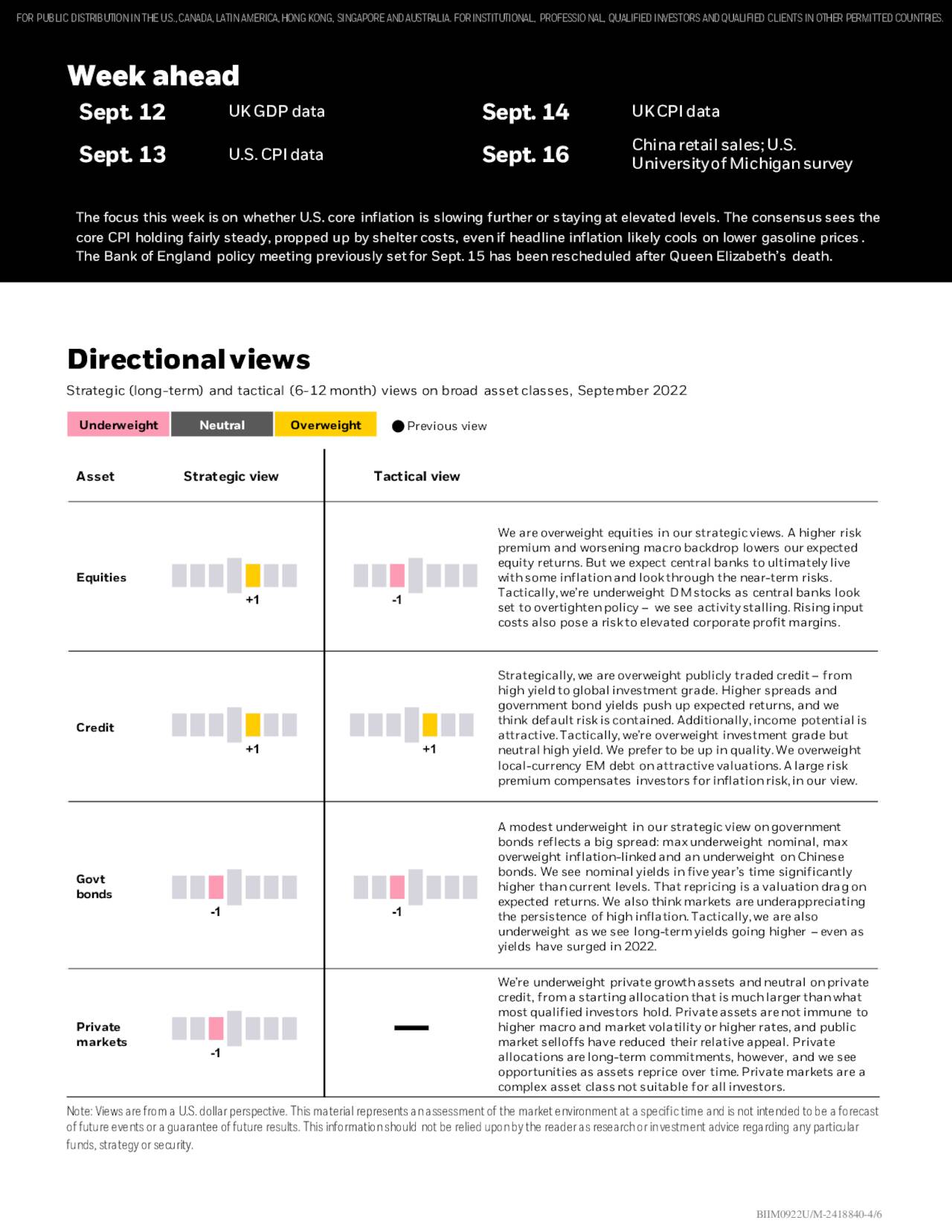 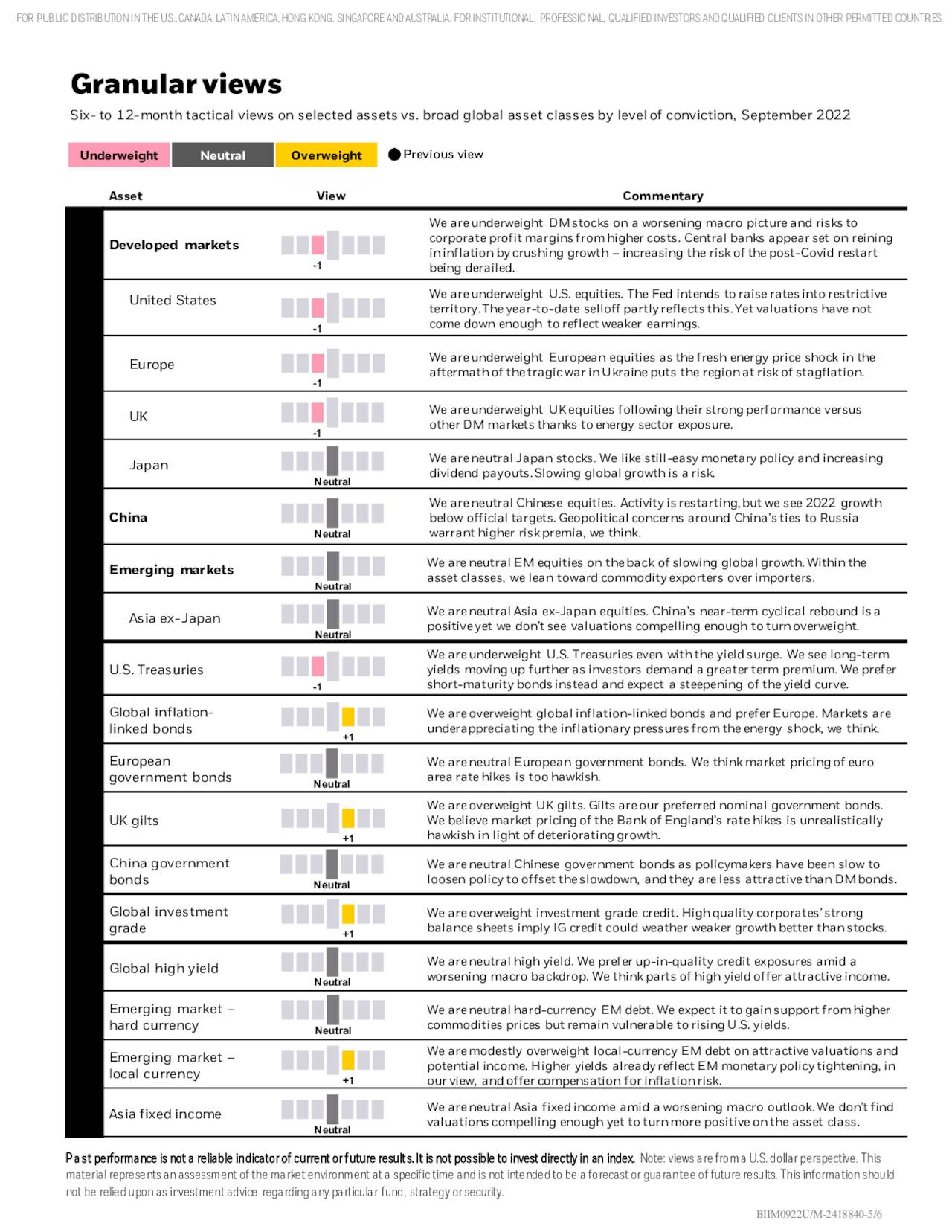 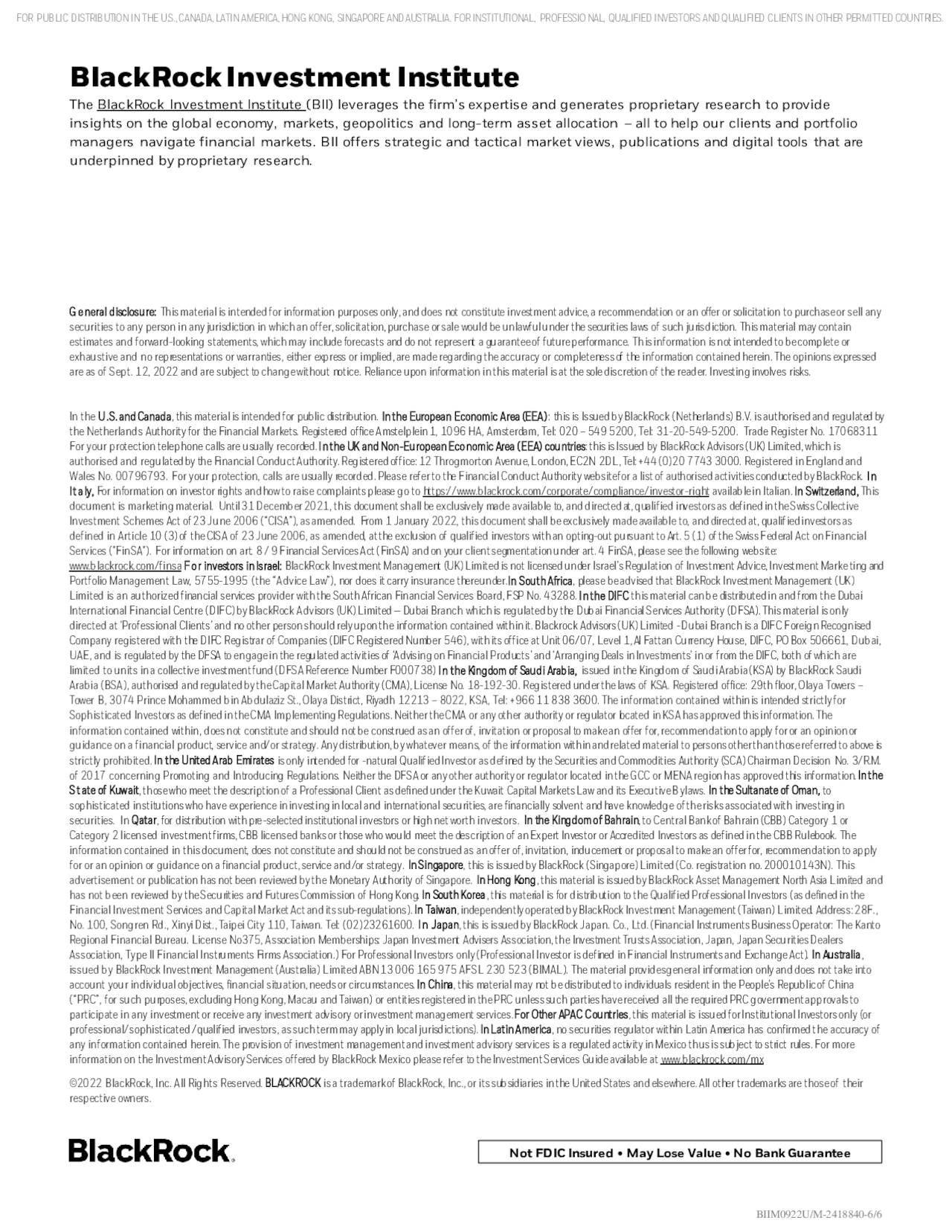 This post originally appeared on the iShares Market Insights.

BlackRock
3.51K Followers
BlackRock’s purpose is to help more and more people experience financial well-being. As a fiduciary to investors and a leading provider of financial technology, we help millions of people build savings that serve them throughout their lives by making investing easier and more affordable.