In the last year or so, the fundamentals for nearly any kind of housing in the United States have scarcely ever looked better

But nothing lasts forever. Trees don't grow into the sky.

Despite this ominous setup, we do not necessarily predict a home price crash akin to the Great Financial Crisis. The future is unknowable, and investing based on such dire predictions turns out poorly more often than it works in one's favor.

However, the data does not look good for the housing market. In what follows, we present three reasons why home prices could soon begin to sink. And we finish with a brief discussion of one of our favorite types of investments right now.

The first and most obvious reason why the housing market could be in for some significant pain ahead is the simple fact that the affordability of homes has dramatically eroded this year.

We need only consider two factors to come to this conclusion: home prices and mortgage rates. While there are some all-cash buyers out there, including institutional investors like Blackstone (BX) along with real estate investment trusts ("REITs") like Invitation Homes (INVH) and American Homes 4 Rent (AMH), most buyers need to use financing in order to make such a huge purchase.

So far this year, mortgage rates have soared rapidly higher, even while home prices have continued to go up.

The 30-year mortgage rate has not been this high since late 2008, and yet home prices have roughly doubled since then.

The same mortgage rate combined with dramatically higher home prices equates to a far larger monthly payment for incremental buyers. This has priced a huge portion of would-be homebuyers out of the market.

Eroding affordability of homes can also be seen in the ratio of new home prices to disposable income per capita:

Average new homes in the U.S. sell for around 10x per capita disposable incomes right now. That ratio is higher than at any point in the last 50 years and may very well be an all-time high. This ratio could only rationally be supported by ultra-low mortgage rates, which we no longer have.

As a result of rapidly eroding home affordability for new buyers, fewer homes are selling. That is a problem for homebuilders (XHB). Though single-family home construction starts are now plummeting, builders began construction on a large number of homes in late 2020 and 2021 that are now set to be delivered into a market with much less demand than they expected.

It's hard to overstate how violent this whipsaw effect is shaping up to be. Ultra-low mortgage rates combined with loads of government-injected stimulus money in 2020 and 2021 resulted in a huge burst of demand, which sent signals to homebuilders to build, build, build. They responded to those signals, but then mortgage rates spiked up and government stimulus dried up.

Now a glut of newly built homes has quickly surged to its highest level since March 2009.

There were 11 months of supply on the market in July 2022, and there are no signs as of yet that this glut of available new homes is peaking.

The laws of supply and demand would seem to indicate that excess supply will require prices to fall for the market to clear and the glut to be reduced.

Unsurprisingly based on the previous two points, sales volume of existing homes (a much larger market than the one for new homes) is also plummeting. Again, it's hard to overstate the speed with which the trend of rising existing home sales volume from 2010 to 2021 has reversed.

In itself, falling home sales volume does not necessarily lead to lower home prices. But historically, that correlation exists, and it is pretty strong.

Below, let's look at the same chart of existing home sales (purple) overlaid by year-over-year changes in house prices (orange):

Note that sales volume of existing homes has dropped (quite rapidly) to around the same level at which home prices began declining in the late 2000s. Does this necessarily mean that home prices will fall? No. But at the very least it indicates that nominal home price growth should fall down to the low single-digits.

It should also be noted, though, that a substantial decline in home prices is not beyond the realm of possibility.

At High Yield Investor, REITs are some of our favorite sectors of the stock market. Though starting yields are lower, the asset type is highly defensive, benefits from higher inflation, and has tended to outperform private real estate over long periods of time.

This is especially true of apartments:

Though we think apartment occupancy and rent growth will probably continue to moderate this year as the economy approaches recession, it's important to note that homeownership's loss is multifamily's gain.

As more and more would-be homebuyers are priced out of buying a home, the benefit steadily accrues to apartment landlords.

Even beyond falling homeownership affordability, there are several tailwinds still in place supporting demand for rental housing, especially apartments:

In other words, we do not see the same vulnerabilities present for the performance of apartments as we do for the housing market.

With that said, here are some of our favorite multifamily REITs:

In short, though we are growing increasingly concerned that the U.S. housing market could be in for some serious pain ahead, we remain bullish on apartments, especially those located in the Sunbelt.

Diversification is often called the only 'free lunch' in investing. While I invest in Tech Stocks, I invest even more heavily in dividend growers that add stability, income, and diversification to my Portfolio: 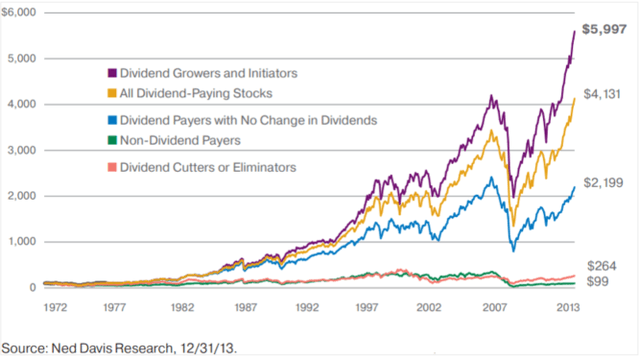 If you want access to my Portfolio that has crushed the market since inception and all our current Top Picks, join us for a 2-week free trial at High Yield Investor.

We are the fastest growing high yield-seeking investment service on Seeking Alpha with ~1,200 members on board and a perfect 5/5 rating from 145 reviews.

High Yield Investor
11.63K Followers
Author of High Yield Investor
Become a “High Yield Investor” with our 8% Yielding Portfolio.
High Yield Investor is a leading community of income investors that is supported by Leonberg Capital, a high yield specialist with over 2,500 clients, including hedge funds, private equity firms, family offices, and high net worth individuals. We spend 1000s of hours and over $100,000 per year researching the market and share the results with you at a tiny fraction of the cost. Joining our community will help you identify the most profitable opportunities BEFORE the end of the pandemic changes the entire dividend stock landscape and allow you to earn a sustainable 6-8% dividend yield that grows over time. Click here to learn more!

Disclosure: I/we have a beneficial long position in the shares of AVB; CPT; HOM.U either through stock ownership, options, or other derivatives. I wrote this article myself, and it expresses my own opinions. I am not receiving compensation for it (other than from Seeking Alpha). I have no business relationship with any company whose stock is mentioned in this article.