As some of my readers know, I was previously a real estate developer in which I built stores for many different businesses such as Walmart, PetSmart, Advance Auto, and Blockbuster Video.

One of Blockbuster's largest franchisees was located in my hometown (of Spartanburg, SC), and I developed several of their stores.

I witnessed firsthand the rise of the Blockbuster franchise that peaked in 2004 at over 9,000 stores and employed over 84,000 people worldwide.

The growth of the chain was exponential as the cofounder, Wayne Huizenga, took a chapter from Ray Kroc's blueprint to open a new store every 24 hours.

I remember reading a book titled "The Making of a Blockbuster," in which Huizenga wrote "over the next seven years, we opened up a new Blockbuster every 17 hours."

Huizenga made millions of dollars and so did many in his inner circle who cashed out when the company was sold to Viacom in 1994 for $8.4 billion.

It is now well known that Blockbuster lost its moat due in large part to the rapid growth in technology, and specifically competition from Netflix, video on demand, and Redbox. The company filed bankruptcy in 2010.

Today I want to tell you about another "blockbuster" story that could make you rich, just like my friend who was one of the early investors in Blockbuster video.

Although the ticker symbol says UHAL, don't be confused, because the company is known by another name: AMERCO (NYSE:UHAL).

Today, U-Haul has a network of more than 21,000 locations in all 50 United States and 10 Canadian provinces.

U-Haul has been a household name for over 75 years, and like many other successful ventures, the concept for U-Haul was generated out of need.

So, the co-founders L.S. "Sam" Shoen and his wife, Anna Mary Carty Shoen, recognized that need and acted upon it. According to the website:

Their visionary approach shared the cost of ownership among many users, facilitating the mobility of the population of the U.S. and Canada. The covered wagon of the pioneers morphed into orange U-Haul trailers. In the process, an industry was born.

…The Shoens reasoned that many other families had a need similar to theirs: the short-term availability of a trailer that could be rented "here" and left "there." No one, at that time, seemed ready or willing to serve that need.

With a 1937 Ford and $5,000 in savings, Sam, Anna Mary and their young son moved from Los Angeles to Portland, Ore. During the drive, they came up with the name and formulated the outline of what was to become the U-Haul Trailer Rental System."

UHAL has expanded into the complementary segment of self-storage, as it owns 2,188 company owned and operated locations, 1,859 of these locations contain self-storage (1,374 owned, 485 operated).

That's quite an empire…and it's still growing!

As per the Q1-23 earnings call, the company said equipment rental revenue grew by 5% or about $55 million "primarily coming from better revenue per transaction." As you can see below, rental equipment revenue grow substantially from Fiscal Year 2021 to Fiscal Year 2022:

Performance of self-storage remains strong, as revenues were up $36 million, which is about a 26% increase. The company also experienced growth in average revenue per foot, averaging somewhere north of 9%.

UHAL's occupancy ratio for all of its storage locations increased 5% to 85% year-over-year, and within that group, 83% of these locations were operating above 80% occupancy (at June 30) and the average occupancy at those locations was 96%.

On the Q1-23 earning scall the company said:

One of our challenges is to create more opportunities in the self-storage portfolio by producing new units. To illustrate this need, we have 10,400 fewer vacant rooms available to fill at the end of June this year than we did last year.

And compared to 2 years ago, we have 71,500 fewer rooms. For the first quarter this year, so far, we've invested $278 million in real estate acquisitions along with self-storage and U-Box warehouse development costs.

That's up from $184 million last year. If you look out over the last 12 months, this represents our highest level of investment in new properties and development at $1.1 billion of investments."

As you can see below, UHAL has $17.8 Billion in Assets and $6.2 Billion on Notes, loans, and leases payable. Also, there's roughly $3 Billion of cash on the balance sheet.

This debt $6.2 Billion in debt is comprised of Senior mortgages ($2.3 Billion) that can be paid off with cash on the balance sheet. The terms for the long-term debt is reasonable, and given the massive real estate portfolio, if the company were to convert to a real estate investment trust ("REIT") it would have an investment grade profile.

In addition, the debt maturity profile is well-laddered.

Insiders (Joe Shoen and his brother Mark) owns ~43% of the shares and of course this means they have significant influence over the business and policies, that includes approving transactions and electing board members.

Also, as I reviewed the 10-K there are numerous conflicts in which family members own real estate assets that don't benefit shareholders directly.

Also, as you can see, UHAL's dividend history has been scrappy at best. Since the company is not structured as a REIT, it has more influence over its dividend, and it has opted to not pay a regular dividend.

I'm sure that many retail investors will run when they say this type of dividend policy.

Let me be perfectly clear…

I'm not an Activist, simply call me a suggestivist…

One way to unlock value is to spin the self-storage portfolio into a REIT.

Based on the valuation of the company today - trading at 9.3x - and a normal valuation of 16.6x - the company could easily distribute around $10 per share in dividends (must payout at least 90% of net income to qualify as a REIT) and satisfy REIT requirements.

According to Barron's, UHAL generates around $700 million in annual revenue from its self-storage business, compared to these REIT comps:

As Barron's pointed out, the truck rental business "produces most of its $5.7 billion in annual sales."

Perhaps UHAL can learn from other well-known brands like Iron Mountain (IRM) that successfully converted from a C-Corp to a REIT and began to pay out systematic dividends.

In the Barron's article, Steve Galbraith, CIO at Kindred Capital Advisors, said "if the Shoen family ever wants to sell, Berkshire Hathaway (BRK.A, BRK.B) would be an interested buyer."

UHAL is not your run of the mill real estate play, but I certainly buy into the business model, and there's no doubt that the company has leading market share when it comes to truck rentals (according to Barron's 50% market share).

Compared to other self-storage REITs, UHAL is the laggard, down ~25% year-to-date, and Galbraith "thinks shares are worth 50% more than their current price."

Assuming he's right, this very well could be the making of another blockbuster! 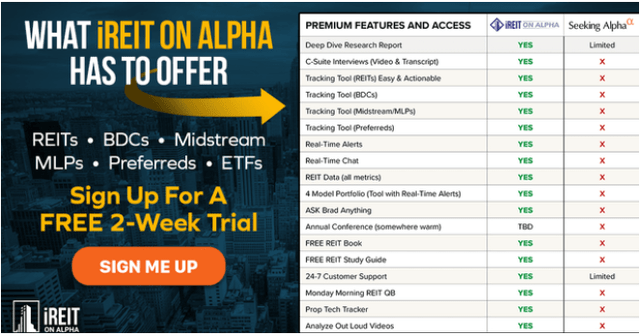 Disclosure: I/we have a beneficial long position in the shares of UHAL either through stock ownership, options, or other derivatives. I wrote this article myself, and it expresses my own opinions. I am not receiving compensation for it (other than from Seeking Alpha). I have no business relationship with any company whose stock is mentioned in this article.