The California legislature recently passed a series of bills, signed into law by Governor Gavin Newsom on 16 September, that should have meaningful effects on environmental policies and the green energy transition. The highlight of the bills is a goal of carbon neutrality by 2045.

While this legislative package is meaningful for many industries, we focus this note on the impact to the state's carbon cap-and-trade program. Although the bills have positives and negatives for the value of California carbon allowances (CCAs), we view the likely alignment of the cap-and-trade program with the 2045 goal to be positive for carbon prices.

The bills follow on the heels of the Inflation Reduction Act (IRA), passed by the U.S. Congress and signed into law by President Biden, which included many components supportive of renewable energy, carbon sequestration, and other climate-friendly policies. Much like the IRA, the California bills together aim to reduce emissions and encourage growth in non-hydrocarbon energy sources, while encouraging carbon capture usage and sequestration (CCUS) to facilitate the ultimate goal of carbon neutrality.

In his August letter to the California legislature, Governor Newsom outlined five priorities:

In addition, the governor's office prioritized legislation to extend the operation of the Diablo Canyon nuclear plant to 2030 from the current scheduled closure by 2025. This closely followed rulemaking that will prohibit the sale of new vehicles powered by internal combustion engines in the state by 2035.

The irony of the timing of passage of this rule - while at the same time California was asking consumers to conserve energy and not charge their electric cars - was not lost on many and, if anything, demonstrates the long-term challenges the state faces in meeting its varied goals.

By the end of California's 2022 legislative session on 31 August, all of the governor's proposals passed but one - California Assembly Bill 2133, which fell short by four votes in the state assembly after passing through the senate. The bill would have strengthened California's 2030 target to reduce emissions from 40% to 55% below 1990 levels, much like the European Union is intending to do with its own carbon emissions from power and large stationary industrial sources.

While the 55% reduction target could have been an immediate catalyst for higher carbon prices, the California Air Resources Board (CARB) is likely to align policies in the state's cap-and-trade program to reflect the newly legislated goal of carbon neutrality by 2045 (California Assembly Bill 1279). Modifications to align the program - which is currently slated to expire in 2030 - with broader, more ambitious climate goals and an extension to 2045 would provide welcome clarity and could support higher valuations for CCAs, in our view.

By extending the cap-and-trade program alone, the present value of the future price floor for auctions of CCAs (see Figure 1), which rises at a rate equal to the consumer price index (CPI) plus five percentage points, could increase by at least 50%. 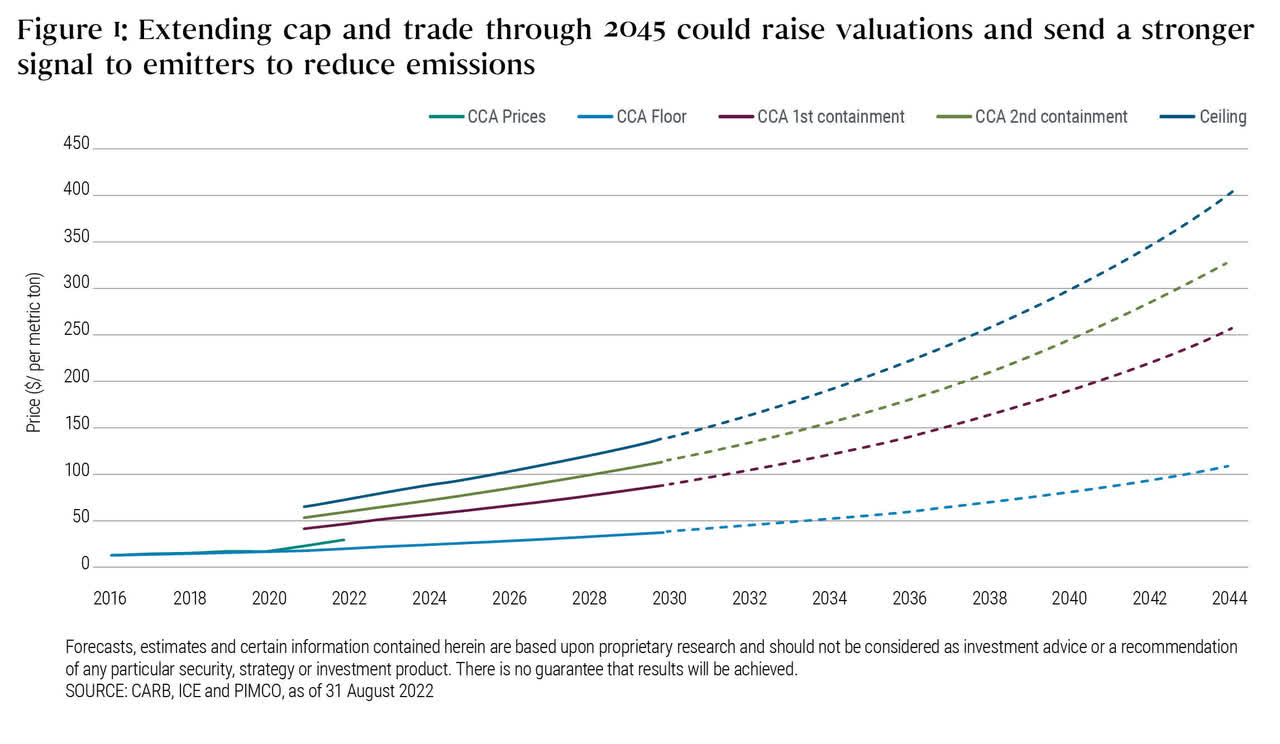 In addition, other jurisdictions in the U.S. and globally continue to move to reduce carbon emissions as well, which may enable CARB to continue to tighten the cap-and-trade program due to reduced potential leakage of economic activity to other more carbon-friendly areas.

Less than a year ago, the U.S. reentered the Paris Agreement but brought very little in the way of proposals to the U.N. Climate Change Conference (COP26) in Glasgow, Scotland. The White House's attempts at climate change legislation appeared to be floundering, and few initiatives were progressing on the state level. Fast-forward one year and much has changed.

Yet recent events in Europe demonstrate that it's necessary to consider expanding energy supplies while also ensuring the security of those supplies. At the same time, growing clean energy supplies and reducing carbon emissions to limit global warming and its adverse effects should be imperatives. To that end, we believe the steps taken by the U.S. and California - while not perfect or beyond criticism - are pointed in the right direction and are strongly supportive of carbon prices.

All investments contain risk and may lose value.

ESG investing is qualitative and subjective by nature, and there is no guarantee that the factors utilized by PIMCO or any judgment exercised by PIMCO will reflect the opinions of any particular investor, and the factors utilized by PIMCO may differ from the factors that any particular investor considers relevant in evaluating an issuer's ESG practices. In evaluating an issuer, PIMCO is dependent upon information and data obtained through voluntary or third-party reporting that may be incomplete, inaccurate or unavailable, or present conflicting information and data with respect to an issuer, which in each case could cause PIMCO to incorrectly assess an issuer's business practices with respect to its ESG practices. Socially responsible norms differ by region, and an issuer's ESG practices or PIMCO's assessment of an issuer's ESG practices may change over time. There is no standardized industry definition or certification for certain ESG categories, for example "green bonds"; as such, the inclusion of securities in these statistics involves PIMCO's subjectivity and discretion. There is no assurance that the ESG investing strategy or techniques employed will be successful. Past performance is not a guarantee or reliable indicator of future results.

Statements concerning financial market trends or portfolio strategies are based on current market conditions, which will fluctuate. There is no guarantee that these investment strategies will work under all market conditions or are appropriate for all investors and each investor should evaluate their ability to invest for the long term, especially during periods of downturn in the market. Outlook and strategies are subject to change without notice.

PIMCO as a general matter provides services to qualified institutions, financial intermediaries and institutional investors. Individual investors should contact their own financial professional to determine the most appropriate investment options for their financial situation. This material contains the opinions of the manager and such opinions are subject to change without notice. This material has been distributed for informational purposes only and should not be considered as investment advice or a recommendation of any particular security, strategy or investment product. Information contained herein has been obtained from sources believed to be reliable, but not guaranteed. No part of this material may be reproduced in any form, or referred to in any other publication, without express written permission. PIMCO is a trademark of Allianz Asset Management of America L.P. in the United States and throughout the world. ©2022, PIMCO.

PIMCO
1.92K Followers
PIMCO is a global leader in active fixed income. With our launch in 1971 in Newport Beach, California, PIMCO introduced investors to a total return approach to fixed income investing. In the 50 years since, we have worked relentlessly to help millions of investors pursue their objectives – regardless of shifting market conditions. As active investors, our goal is not just to find opportunities, but to create them. To this end, we remain firmly committed to the pursuit of our mission: delivering superior investment returns, solutions and service to our clients. Visit PIMCO’s blog. Subscribe To Get PIMCO Insights Delivered Directly to Your Inbox.