Some parts of this article appeared in a more detailed version in the Daily Drilling Report, Sunday, September 25th.

BP p.l.c.'s (NYSE:BP) stock has traded in a fairly tight range of $28-$32 per share for about a year now, despite briefly nudging $34 in June. The company is flush with cash and recently raised its dividend and announced a share buyback. As an investor, I am more interested in the dividend than the share buyback. With nearly 20 bn shares outstanding, it's going to be a while before share buybacks have much of an impact on the lives of shareholders. I won't be around to ever see the day that last share is bought back. Missing it by 800 years if my ciphering is right.

Although, it can be argued that with the company's absurdly low cash flow multiple-2X, the company is making a shrewd investment. It can also be argued, from the stock's weak connection to upward oil price movements, that it is dead money. In the current interest rate environment, you really can't be complacent about non-performing assets. If it's not appreciating faster than the rate of inflation, you are losing money.

In the oilfield, sometimes we leave debris in the well that has to be ground up or retrieved. This can be a time-consuming and expensive process where the outcome isn't always favorable or easily obtained. This situation is referred to colloquially as "Junk in the Hole," and I think suits the new ESG-oriented BP to a "T."

I maintain my strong sell rating on the company and suggest that you can literally throw $28 dollars in any direction and come with a better investment than BP. I will offer one as we close out this article.

The thesis for BP

"So, we plan to reduce production by 40% by 2030 and create a resilient, lower cost and lower carbon oil, gas and refining portfolio that is smaller but of the highest quality, giving us the cash flow we need to help fund our transition to an integrated energy company."

The bet the company is making is by 2030, they can replace the revenue and profitability that hydrocarbons have brought, with revenue from wind farms, solar farms, hydrogen production, biofuels. This is all untried territory for the company and investors can be forgiven for being wary. Bernard Looney, CEO noted that they planned to deliver $2 bn in EBITDA from these sources by 2030, leveraging their 20000+ retail sites.

"Here, we aim to deliver around $2 billion of EBITDA by 2030, focusing on fleets and focusing on fast charging to on-the-go customers."

I wonder if Mr. Looney ever thinks about all the ancillary sales that go with gasoline and diesel, used in internal combustion engine ("ICE") cars? Electric vehicles ("EVs") just aren't going to need oil changes, transmission fluid, nor do I think there is a "High Octane" version of electricity that will cost 40% more than "Low lead." (That's what we used to call the cheap stuff.) How about that $10 air filter that now costs $50 (I just bought one.), the one the tech brings you full of road dust, shaking his head. EVs aren't going to need those either. What about all the belts and hoses that transfer energy from one part of the ICE engine to another? They're gone too in the EV era. I could go on, but I am sure you get where I am headed, so we will move on.

I think much of what the company is planning is hopium. Anytime I see the words, "We aim," "we expect," or "should," in an earnings report my spider sense starts to tingle. BP uses those phrases a lot in their commentary. If I see the word "Stakeholder," I run for the exit.

For the time, BP is generating massive amounts of cash quarterly. Natural Gas and Low Carbon Energy contributed $6.1 bn toward the $12.1 bn total for the quarter. They don't break out current revenues from Low Carbon Energy, so it's a pretty safe bet the current demand for natty is driving growth in this business segment. This is cash they are using to pay down debt, fund a share buyback scheme, increase dividends, and invest in energy transition projects and at the very last, Resilient Hydrocarbons.

It should be noted that BP is a heavy hitter in natural gas and the company views natty as part of the energy transition. BP has made some major investments in LNG, notably in West Africa with its buy-in of the Greater Ahmeyim Tortue project offshore Senegal and Mauritania. Phase I is forecast to produce 70K BOEPD, with potential (now under FID review) for Phase II. It should be noted that it's not all sunshine and daffodils on this project. The recent typhoon-Muifa, tore the Gimi FLNG vessel loose from its moorings. Details are sketchy at this point, but if this vessel has sustained significant damage, the project will be further delayed.

BP is also divesting its stake in the Canadian Sunrise and Pike oil sands projects, wanting to disassociate itself from this somewhat notorious (undeservedly so)resource as it does not fit into their desired clean and shiny energy profile.

This is a cash and exchange deal with Cenovus Energy (CVE), with BP taking on the Bay du Nord project offshore, Eastern Canada. At this point, all we can say is, "There goes 50K BOEPD of output from BP's ledger.

In summary, BP's Resilient Hydrocarbons business certainly has staying power, subject to oil prices to support the initiatives we've discussed above. There are some risks and caveats to that we will cover when we wrap up and make a recommendation.

I have looked at the company through a fairly harsh lens in the last couple of years, calling them uninvestable due to their ESG messaging. For the purpose of this review, as I noted in the intro, I'm maintaining the strong sell rating on the company while acknowledging some investors may find the dividend yield attractive.

At a high level, significant growth has managed to elude the company for the entire year, leaving them about 15% above where they started out in 2022. Most of that occurred in the January spike to $32, and it's been range bound largely ever since. Last week's market action took them to the lower bound of that range.

2022 has been a time where the share prices of many E&P companies have doubled and tripled with rising oil prices. For example, Shell (SHEL) a company BP is often compared against, has seen its stock rebound from about $30 at the beginning of this year, to over $60, before the current market weakness started. So, clearly, I am not the only Doubting Thomas poking BP with a stick for signs of life.

On the subject of Shell just briefly, news broke as I was putting this piece together of their abrupt exit from a couple of Irish offshore wind farm projects, Emerald, and Western Star. The company didn't list a specific reason but cited difficulty in dealing with Irish regulators. Ireland must be a special case when it comes to out-of-control regulation as even Equinor (EQNR) has given up on it, as the linked article notes. BP is a heavy investor in yet-to-be-built wind farms, as I noted in an article last year. This predilection is what I mean when I say "Green Rabbit Hole."

One of the metrics I use to gauge the health of an oil company is its reserves. You can see that for the last three years it has fallen as capex has been restrained for new upstream development and diverted toward ESG friendlier sources. Wind, Solar and Hydrogen have all absorbed big chunks of BP's capex budget as the company has sought to accelerate its move away from petroleum.

I expect this trend to continue for 2022, although we won't get a firm grip on that until next year when they publish their annual report.

Quarterly production of 2,198 mm BOEPD was down from the prior quarter of 2,252 mm BOEPD, and down still further from Q-4, 2021-2,332 BOEPD. So the trend is not their friend as regards production. This is in spite of splashing a couple of new projects in GoM this year-Herschel, and Mad Dog Phase II intended to deliver ~140K BOEPD.

But there is that tasty dividend which BP has forecast to grow 4% annually-at least. The question before us is, is it sustainable? Is it even attractive given the lack of growth in the company?

BP's new dividend is certainly sustainable and was designed to be such. It is important to remember, though, a couple of years ago the company broke faith with investors with a savage 50% cut in their formerly high-yielding dividend. Fool me once, as the old saying goes. We know when the going gets tough, current management will scrap the dividend in favor of other balance sheet items.

But with interest rates rising and CD rates of 3.0%, does it even makes sense to take stock risk for the now 5.03% yield of BP? Only you can answer that. That yield may sound attractive, but with inflation running at 8.5% annually, you are losing ground, while risking capital.

I said I would offer a similarly priced alternative to BP for investors who believe in and want to bottom fish the energy market. Here it is. Suncor Energy Inc. (SU). Suncor has been doing a lot of things right, and earlier this year saw its stock crest $40 per share. It is now trading in a similar range to BP and at current prices is yielding 5.25%.

With Suncor's low decline in heavy oil assets and growing production at 5% a year, I view them as a much safer choice than BP. As a final inducement, think about their low decline assets. With 7.9 bn bbls of 2-P reserves, at current production rates, they have about 28 years of production remaining. At their current rate of stock repurchases, the company has the potential to go private in about a dozen years. This year it has repurchased 15% of the 1.3 bn shares outstanding, a pace that could have them purchasing those last shares in about 8-9 years. Meaning those last 17-18 years could be pretty lucrative for remaining shareholders!

I always tried to avoid junk in the hole in my active career, and do my best to avoid it in retirement. I am long SU, and have no interest in BP. 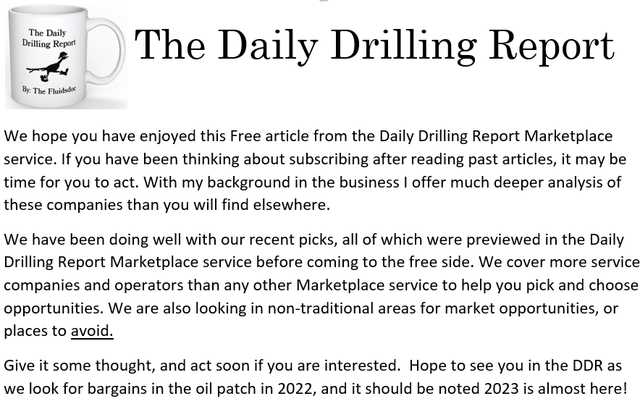 Fluidsdoc
9.14K Followers
Author of The Daily Drilling Report
40 years of oilfield and analyst experience to work to find you winners.

Disclosure: I/we have a beneficial long position in the shares of SU either through stock ownership, options, or other derivatives. I wrote this article myself, and it expresses my own opinions. I am not receiving compensation for it (other than from Seeking Alpha). I have no business relationship with any company whose stock is mentioned in this article.

Additional disclosure: This is not advice to buy or sell this stock or ETF in spite of the particular rating I am forced to select in the SA template. I am not an accountant or CPA or CFA. This article is intended to provide information to interested parties and is in no way a recommendation to buy or sell the securities mentioned. As I have no knowledge of individual investor circumstances, goals, and/or portfolio concentration or diversification, readers are expected to do their own due diligence before investing their hard-earned cash.