Real estate investment trusts ("REITs") are down 30% year-to-date, which is quite a bit worse than the performance of the S&P 500 (SPY):

And it is actually even worse than it may seem.

In reality, most REITs are small and mid-caps, and you can imagine that the smaller and lesser-known REITs must have performed even worse.

Today, it is not uncommon to find small REITs that have dropped by 40% or even 50%, and, as you would expect, this is well-reflected in their valuations. Today, most REITs are discounted, but smaller REITs trade at even larger discounts relative to their larger peers:

(*based on own estimates)

We think that this is an opportunity for active investors.

Smaller REITs are today priced at large discounts because they are perceived to be materially riskier in a recession, but this is not necessarily true.

Sure, they may be smaller in size, but they still remain relatively large, owning $100s of million worth of real estate in most cases. A private real estate investor would typically feel sufficiently diversified with a portfolio that's worth $10 million, and yet, for whatever reason, they think that a REIT with a $500 million portfolio has too much concentration risk and will discount it heavily.

Besides, REIT investors can take care of diversification themselves. If you fear that a smaller REIT lacks diversification, you can invest in several of them to fix this issue.

In that sense, the small-cap segment of the REIT may today offer better returns with less risk than many of their larger peers. This, of course, isn't always true, and you still need to be selective to avoid value traps. However, with a good selection process, there are a lot of buying opportunities to be found among small-cap REITs after the recent sell-off.

Below, we highlight a few that we have been buying at High Yield Landlord:

AHH is probably the cheapest apartment REIT based on its P/FFO of just 9.8x. Larger apartment REITs commonly trade at closer to 20x FFO and even they are undervalued today.

Why is AHH so heavily discounted?

We think that there are two main reasons.

Firstly, AHH is a small REIT with a $960 million market cap. Few investors know about it, and the float is too small for major institutional investors.

Secondly, AHH is not seen as an apartment REIT because it also owns other assets. Instead, it is commonly put in the "diversified REIT" peer group, which commonly trades at a lower valuation. But what the market appears to have missed is that AHH's exposure to apartment communities has been steadily creeping up, and it has now reached around 50% based on its NAV (it is lower based on NOI, but these are lower cap rate assets).

So, in a way, AHH is a soon-to-be "quasi-apartment REIT," but it still trades as if it was a small-cap diversified REIT with little appeal. As the market recognizes this, we expect its valuation to expand materially, unlocking ~50% upside to shareholders. Even at $15 per share, it would still offer good value, relatively speaking, and you can buy it today at $10.

While you wait for the upside, you also earn a 7.2% dividend yield that's well-covered and growing. It was recently hiked by 12%.

Its net asset value per share reached $22.35 per share last quarter, and this NAV estimate is based on private market transactions. Unlike U.S. REITs, BSR needs to provide regular NAV estimates to analysts according to IFRS accounting rules because it is structured in Canada.

In other words, you get to buy BSR's portfolio of apartment communities at a 30% discount to fair value, or 70 cents on the dollar.

Is something wrong with its portfolio?

On the contrary, this is one of the most desirable portfolios of apartment communities in the entire REIT space. BSR owns mainly affordable class B communities in rapidly growing Texan cities like Dallas, Houston and Austin. These cities are enjoying rapid rent growth as the influx of new residents has not been met with enough new construction, especially in desirable locations.

As a result, BSR's rents are growing rapidly. Its same property NOI rose by 16% in the last quarter! Even if the growth slows down a bit, which is expected, the growth would still remain substantial for a REIT that's priced so cheaply.

So why is it so cheap?

Again, it is probably too small to attract major institutional investors, and since it is structured in Canada, it is flying off the radar of most individual investors as well.

Industrial REITs have sold off heavily in 2022, and EGP was hit particularly hard:

EGP is very intriguing because it is down 36% and now trades at an estimated 30% discount to its net asset value, and that's despite enjoying very strong fundamentals.

In the most recent quarter, it grew its FFO per share by 13.3% and hiked its dividend by 13.6%. It also hiked its full year guidance, and the management sounded very bullish on the latest conference call.

Yet, the market appears to have suddenly turned pessimistic due to Amazon's (AMZN) announcement that it would scale down the leasing of new industrial space. The market took this as a big red flag, when in reality, it shouldn't have. Amazon is a unique case because it leased an abnormally large amount of space during the pandemic to get the best spots ahead of its competitors, and so it is natural for it to now consolidate some of its excess space.

Ignoring Amazon, the demand growth remains strong for industrial space. It is largely driven by the return of onshoring and the growth of e-commerce, which requires a lot of industrial space. The pandemic caused significant supply chain issues, especially in China, and then Russia's invasion of Ukraine created even more supply chain issues. It taught U.S. companies that there are significant hidden costs in doing business in dictatorships and these days, it is often more efficient to have larger portions of your supply chains within the U.S.

This should be particularly beneficial to EGP's properties because they are mainly located in in-fill, urban locations of rapidly growing sunbelt markets.

As its share price recovers to its previous highs, EGP offers 60% upside potential to its shareholders.

Often, the best opportunities are found where others aren't looking.

Small-cap REITs are a great example of that.

They are ignored by major institutions due to the lack of volume, and also by individual investors because they don't have easy access to research on these opportunities.

As a result, they are often mispriced by the market and offer exceptional opportunities for more sophisticated investors. 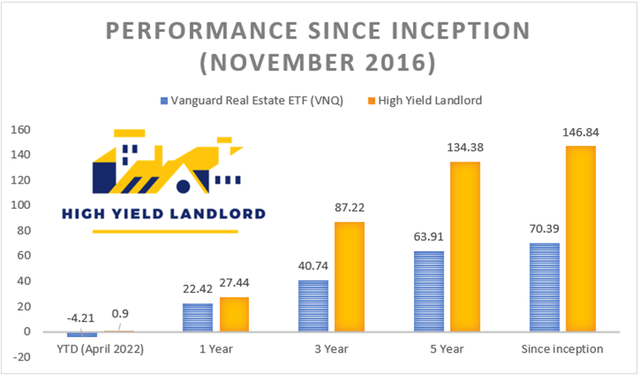 Disclosure: I/we have a beneficial long position in the shares of AHH; HOM.U; EGP either through stock ownership, options, or other derivatives. I wrote this article myself, and it expresses my own opinions. I am not receiving compensation for it (other than from Seeking Alpha). I have no business relationship with any company whose stock is mentioned in this article.