Athabasca Oil Corp. (OTCPK:ATHOF) is another junior oil producer that's benefiting from higher oil prices. And, let's understand the current prices are better than anything we saw in 2021. We just got spoiled in Q-1 and 2 with the growth the $130 oil and later for much of Q-2, $100 oil brought. Oil goes up and down and the volatility we are experiencing now, should come as no great surprise.

Athabasca has been doing some things right, but has struggled with legacy debt. The increased cash flow over the past year has been deployed toward deleveraging, (U.S. $131 mm) and the company expects to be cash positive by YE 2022. Also on the plus side the company has been meeting production target forecasts, suggesting an adequate capex program to modestly increase production. This modest capital program is indicative of long-term sustaining capital that benefits from a low decline, large resource asset base.

In fact the company, in Q-2 the company guided toward increased output of 34-35k BOEPD, from 33.5K BOEPD presently.

The thesis for Athabasca

The company concentrates much of its efforts in the Leismer area where it produces ~26.5 BOEPD of heavy oil by way of non-compressible gas steam flood. That's a fancy way of saying "NGLs, primarily methane" to help seal off vugular sections of the reservoir, which reduces steam concentration requirements. This is a good thing as steam flooders are under the gun by the enviro crowd for water consumption and CO2 emissions for burning gas. The company has three centers for steam injection, two which are active with one- Corner targeted for future expansion. Leismer, for example is permitted to 40K BOEPD. This is pretty high cost production that uses expensive inputs to extract heavy oil, and requires diluents to pump. Drilling costs are fairly low with sustaining capex in the $5.00 per barrel range. It's a good business as these wells produce forever, but in relatively low volumes. The Company has a deep asset inventory with 1,230 mmbbl 2P Reserves in Thermal Oil, meaning at present rates it could produce proved reserves for 40 years, and 2P for another 60 years.

The lighter oil developments at Placid has a 30% WI partner in Murphy Oil (MUR) and also as JV partner in the Kaybob Duvernay. Murphy is a micro-major with a deep bench when comes to talent, and global expertise. I've worked them in the past and felt they performed on a par with the Super Majors. Having them as a partner and JV operator is a definite asset to a junior operator like ATHOF.

Light oils require less processing for premium products and often command premium pricing to the heavier stuff at Leisner and Hangingstone. This is unconventional drilling that depends on fracking to complete, which is expensive. ATHOF has identified over 850 drill sites across 280K acres in this play. Both ATHOF and MUR have been working to bring down D&C costs, and once on production the wells have been exhibiting high IPs and low decline curves. This business helps even out cash flow during periods where the larger thermal business is constrained.

The company notes the impending arrival of new takeaway capacity over the next couple of years. Enbridge (ENB) Line 3 is complete, but has permitting issues hanging over it. Trans Mountain Expansion is targeted for 2025 and should add significantly to market egress for heavy oils.

As the slide notes and we have discussed, differentials for heavy Canadian crudes-WCS, have tightened in the last couple of years, but are higher now. That is likely due to the pipeline constraints we have now, in effect landlocking some production or requiring train transport which is more expensive. The slide above notes the SPR releases of mid-gravity crude as well, which is pinching the Canadian market. That is due to end in November.

Canada is now our largest supplier-by far. A lot of that is blend stock headed to our GoM refineries to bring up the API gravity of the light oil coming from shale.

On the plus side ATHOF is 50% exposed to market prices, which are pretty close to $80 now. They are also 30% hedged at $74 WTI meaning lower settlement fees if crude stays in its current range.

As you know I think the bull story for oil will reassert itself as the year closes out. I've discussed this until I am blue in the face-figuratively speaking. This notion underpins the thesis for ATHOF.

One key to justifying a stake in ATHOF is management's commitment to deleveraging with the rain of cash they are raking in presently. They have made a significant step in that direction with the reduction of $167 million (US$131 million) in Term Debt In Q-2, achieving 75% of their US$175 million debt reduction target which is anticipated to be reached in H1 2023. The Company has low Net Debt of ~$100 million and expects to be in a Net Cash position before year end. The company also has warrant liability originally 350,000-190,000 had been exercised as of Q-2, leaving 160K for future conversion. It is also a covenant of the debt that 75% of their free cash flow go toward deleveraging. So they are on a good track, which higher oil prices should assist in achieving.

ATHOF is increasing production and has ample room to grow within cash flow while delivering on debt reduction. Capex of ~$100 mm CAD is well covered by current and projected cash flow of $350 mm along with other obligations.

ATHOF is trading at an EV/OCF ~5X, so not rock bottom cheap on that metric. On a P/FB they trade at $27K per barrel, so there is quite a bit of wiggle room there.

ATHOF is probably not for the faint of heart. Analyst have an overweight rating on the company with price targets ranging from $3.00-3.75 high to low. The current price of $2.12 gives a margin of safety to new entrants. I think if you are an investor with an aggressive risk profile, ATHOF might rate a place in your portfolio.

Final comment. It also helps my conviction for ATHOF that I think oil prices are going higher. Supplies are very tight, and only the SPR releases have masked this situation. Subtract ~160 mm barrels from this inventory report released today and you begin to get a true picture of this impact. I have other reasons as well for thinking supply demand will drive prices higher soon, that I will detail in a future article. 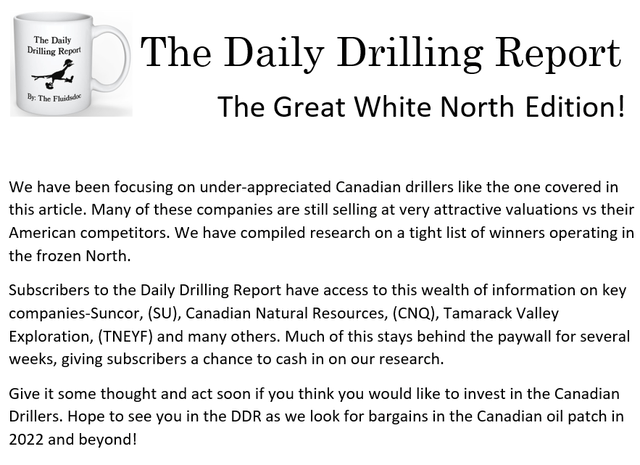 Fluidsdoc
9.16K Followers
Author of The Daily Drilling Report
40 years of oilfield and analyst experience to work to find you winners.

Additional disclosure: This is not advice to buy or sell this stock or ETF in spite of the particular rating I am forced to select in the SA template. I am not an accountant or CPA or CFA. This article is intended to provide information to interested parties and is in no way a recommendation to buy or sell the securities mentioned. As I have no knowledge of individual investor circumstances, goals, and/or portfolio concentration or diversification, readers are expected to do their own due diligence before investing their hard-earned cash.