There are some stock market terms that are thrown around all the time and everyone understands.

There are some stock market terms that are thrown around all the time and nobody understands. Not really. Not unless they’re experts (and sometimes not even then).

Then there are terms that aren’t used all that often. That you may or may not understand.

The concept of “dollar-cost averaging” ("DCA") is probably more of the latter. Chances are decent that you’ve heard of it. But it’s very well worth explaining in case you haven’t.

And it can be even more worthwhile to put into practice. With the right stocks, of course.

For starters though, let’s define it. It’s something Benjamin Graham – the father of value investing and Warren Buffett’s original mentor – really popularized, saying that:

“Dollar-cost averaging… means simply that the practitioner invests in common stocks the same number of dollars each month or each quarter. In this way, he buys more shares when the market is low than when it is high. And he is likely to end up with a satisfactory overall price for all his holdings.”

That was from his famous book, The Intelligent Investor, a source that’s inspired me on multiple levels. As my regular readers know, I quote it all the time. I even named my latest book The Intelligent REIT Investor Guide.

That’s how much I admire the man.

He was hardly perfect. Nobody ever is. But, boy, did he know how to make money in the stock market. Even stock markets like this one.

An “Average” Graham Way of Investing

Graham was born in England, but his family moved to the U.S. early on in his life – both for better and worse. As Investopedia writes:

“By the age of 25, he was already earning about $500,000 annually. The stock market crash of 1928 lost Graham almost all his investments and taught him some valuable lessons about the investing world. His observations after the crash inspired him to write a research book with David Dodd, called Security Analysis. Irving Kahn, one of the greatest American investors, also contributed to the research content of the book.”

“… laid out the fundamental groundwork of value investing, which involves buying undervalued stocks with the potential to grow over time. At a time when the stock market was known to be a speculative vehicle, the notion of intrinsic value and margin of safety … paved the way for a fundamental analysis of stocks void of speculation.”

Of course, some could (and do) argue, so does buying into a company in one lump sum. And they have a point, especially when it comes to dividend-paying stocks like real estate investment trusts (REITs).

After all, the quicker you buy into a company that offers payouts, the more payouts you can accumulate.

Fair enough. And in many cases, I’m all in on that line of thinking. However, there are some exceptions that I’d like to address.

Buying Up a Lot of Littles

Here’s an obvious reason to buy in tranches rather than all at once: You don’t have enough money to wisely do it any other way.

This could easily apply to anyone just starting out in the markets – or those having to restart after taking a big hit (perhaps even this year). You’ve got bills to pay and expenses to account for, after all.

As such, you only have so much to invest at any given time. And you know you’re supposed to spread your investments out instead of buying into just one or two.

Dollar-cost averaging, then, allows you to plan accordingly. Better yet, in a market like this, that more and more experts say has further to drop…

You’ll probably end up getting a much better deal. Which, incidentally, is the other reason why you might want to try this trading trick when you think there’s further to fall.

This isn’t an encouragement for market-timing, mind you. That’s for amateurs, something you simply won’t be if you follow a Benjamin Graham model.

No one knows where the bottom is. Not me. Not you. Not any of the experts mentioned above.

Moreover, a United Nations group is apparently calling on the Federal Reserve and other central banks to cool their inflation-fighting plans. If the Fed listens to that advice, stocks are sure to shoot right back up. But if you’re feeling more bearish than bullish at the moment…

Here are some stocks to consider putting a little into each month instead of buying up in one foul swoop.

Buy More When It Drops

You may recall that I recommended the company back in April when shares were trading at $72.61. In that article I explained,

“Realty Income is well-positioned to continue to execute on large-scale sale-leaseback transactions.”

Yesterday, the company announced it had invested $1.8 billion in properties in Q3-22, "bringing its year-to-date investment to $5.0B.”

By contrast, in Q2 the company invested $1.68B in properties and properties under development or expansion. Also, during Q3 the company raised ~$0.7 billion of gross proceeds from the sale of common stock at a weighted average price of $73.05 per share.

Investors should view performance on a relative basis. What impacts real estate (positive or negative) may not necessary mirror the broader market. This shows that relative to its industry benchmark, O has been just fine (despite using a starting point that was as high as it could’ve been).

O outperforms more than half of the S&P 500 REITs on a Total Returns basis and is in the Top 5 on Total Returns/Price Volatility basis, so investors can count on both a stable stock return and cash return.

The net lease REIT trades at a larger adjusted funds from operations ("AFFO") multiple discount to its long-run average, than its peers generally. So, current relative valuation should be viewed favorably.

Some folks are buying CD’s right now, and if that floats your boat, so bet it.

I prefer DCA-ing into a blue-chip REIT that now offers a juicy dividend yield of over 5.0% and a health payout ratio of under 80% (based on AFFO per share).

The math is on my side, as eventually O should move back into its normal value range and generate outsized total returns. In this market, there’s no need to be cute and chase 9% yielding lemons when you can get an ultra-safe SWAN (sleep well at night) that is likely to generate annual returns of 20% or higher.

Year-to-date, PLD shares have dropped by around 40%, which makes this blue-chip REIT one of the best buys in the REIT sector.

You may recall that I wrote on this logistics juggernaut back in April, when shares were trading at $172.67. In that article I explained that,

“Prologis is a stock that we’ll always be looking to buy when shares trade at or below fair value. However, we’d need to see an extreme sell-off for that to occur and therefore, right now, we’re looking to allocate capital elsewhere throughout REIT-dom when making moves in the various iREIT portfolios.”

Well folks, that extreme selloff has occurred, and PLD shares are now trading at a very attractive level.

On top of that, one of our catalysts is taking place…

Yesterday, PLD announced that it had closed on the completion of its all-stock acquisition of Duke Realty, valued at approximately $23 billion, including the assumption of debt. The completed transaction expands Prologis' presence in key U.S. markets. PLD’s Co-founder, CEO and Chairman Hamid R. Moghadam said in prepared remarks,

"In addition to the day-one accretion and avenues for further earnings growth, this acquisition gives us an even stronger ability to support our customers and their growth. We're gaining high-quality properties and more than 500 new customers in key markets.

These new customers will be able to tap into our Essentials platform, which delivers end-to-end solutions to address critical supply chain challenges and contributes to their broader sustainability efforts."

In addition, Evercore upgraded PLD to Outperform from In Line, as its strong balance sheet coupled with its high-quality portfolio "will help the company manage its business through the economic downturn," according to a note written to clients.

Once again, I’m sure that you can do better than 3.0% (PLD’s dividend yield) by investing in a CD right now…

However, the CD does not offer extraordinary growth, as analysts are forecasting PLD to grow by 13% in 2023 and 10% in 2024. I’m not sure there are too many banks offering up these kind of growth rates for their CDs.

PLD is trading at 25x P/AFFO, and we expect shares could easily return 20% over the next 12 months.

The concept of Dollar-Cost Averaging is advisable only if you’re certain that the stock was cheap when it was bought originally.

Then, the decline offers a good opportunity to up a better bargain. You must also be sure that in taking on the additional shares that you’re not overloading your account (become too concentrated).

If the original stock purchase was doubtful from the start, you should not attempt to dig a deeper hole, especially if there is no guarantee that the stock will not continue to decline.

I also want to recite a few sentences from a recent article I wrote titled “Don’t Be Too Cute”:

“…we're in a new cycle, and one in which investors need to be exceptionally cautious right now.

I know many of you own some high yield stocks, and I do too…

But I purposely limit my exposure to these higher risk names, recognizing that the dividends are not as stable or predictable.”

Better said, now is not the time to chase yield. Our team is battening down the hatches, recognizing that the fool’s gold is only going to become more tempting as time goes on.

I provided you with a list of two of the most impressive REITs on the planet (both A-rated) and these are ideal candidates for buying for the first time of dollar cost averaging...or as the title to this article suggests, "buy more when it drops."

At iREIT on Alpha, we value our retirees and veterans (as well as members of the military), so we will provide a generous discount for anyone who fits into that category. iREIT on Alpha is one of the fastest growing INCOME-FOCUSED services and I look forward to showing you why this service is so special. Send me a direct message for discounts. 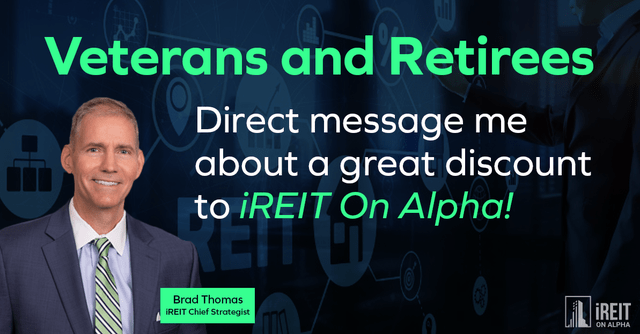 Disclosure: I/we have a beneficial long position in the shares of O, PLD either through stock ownership, options, or other derivatives. I wrote this article myself, and it expresses my own opinions. I am not receiving compensation for it (other than from Seeking Alpha). I have no business relationship with any company whose stock is mentioned in this article.