Midstream was propelled higher this week by an epic 16.5% rally in WTI. The oil price rally was spurred by OPEC and its partners' massive two million barrel per day headline production cut. The cut came amid low speculative positioning in the crude oil futures market and investor sentiment that had grown too bearish. This move finally dispels the notion that the oil market is about to repeat the awful downturn it experienced in the fourth quarter of 2018.

The energy sector continued its upward march relative to other sectors, many of which have been massacred year-to-date basis. During the week, the S&P 500 energy sector gained 13.9%, beating the second-best performing industrial sector by a whopping 11.0%.

Year-to-date returns for energy are similarly impressive. While we don't wish hardship on anyone, we have to admit that the table below is a thing of beauty for energy investors like ourselves who suffered in the energy sector dungeon for so many years.

In midstream, the biggest gainers for the week were the smaller, less liquid equities with commodity exposure. Mineral and royalty owners, gathering and processing companies, and the more obscure midstreamers screamed more than 10% higher on a quiet week for company-specific fundamental news.

Sitio Royalties (STR) led the midstream gainers. We profiled STR as cheap before it had notched most of its weekly gains. Dorchester Minerals (DMLP), Brigham Minerals (MNRL), Black Stone Minerals (BSM), and Viper Energy Partners (VNOM), were among the mineral and royalty owners among the week's top ten gainers. These equities yield between 9.7% and 11.8% and average 10.7% as of Friday's close. We suspect the low equity prices and corresponding high yield are the market's way of discounting "mid-cycle" cash flow, though no one actually knows what mid-cycle economics are, us included. We're all for exercising caution among bullishness, but the outlook for oil production would suggest that mid-cycle economics-which we take to mean the average over a full industry cycle-feature significantly higher pricing than past cycles. This week's events confirm that OPEC and Russia are firmly engaged in market management to the point that they're employing shock-and-awe measures to maintain a bullish market tenor. Moreover, the oil market is staring at a long-term structural supply deficit amid low spare capacity that we believe will keep the call on U.S. oil production in play.

Our portfolio outperformed its benchmark, the Alerian MLP Index, by 2.1% during the week, making back its underperformance of the past few weeks.

I'm not one to read too much into equity market price action, but the breadth and depth of the price decline among midstream and E&P equities over the past few weeks imply that investors were losing conviction in the proposition that U.S. oil will be needed to plug a structural supply deficit. That proposition underpins our portfolio strategy of maintaining significant holdings of commodity-exposed names.

We understand that the rapid rise in interest rates portends slowing economic growth and lower oil demand than would be the case amid lower interest rates. But we also see countervailing factors in the oil market that we believe are poised to keep prices sustained at higher levels. In recent weeks, either the market lost sight of these factors, or it was pricing in an imminent severe global recession.

For our part, we saw no basis to change our outlook for a sustained structural supply deficit and looming supply constraints in the oil market, so we stayed the course and endured the drawdown, which we viewed as temporary. OPEC's supply cut announced this week supports our thinking, as it will take approximately one million barrels per day of oil off the market. The cut also had the effect of restoring conviction among investors that U.S. production will be needed over the short, medium, and longer terms to satisfy global demand.

We should add that we expect to perceive any significant change in the oil market outlook and/or our overarching macro thesis before the market, as we're closer to E&Ps and we believe we have a better read on oil macro than most midstream investors. We would not hesitate to adopt a more cautious stance if the outlook changed and we believed it was necessary to emphasize capital preservation to the exclusion of capital growth. At the moment, however, we're comfortable with our portfolio diversified between conservative midstream names and growth names that tend to have greater commodity exposure.

Our Portfolio's Winners and Loser

Our portfolio's gains were driven by the usual culprits that get hit harder than most on the way down and then snap back strongly during a recovery. Calumet Specialty Products Partners (CLMT), Black Stone Minerals (BSM), EnLink Midstream (ENLC), and Martin Midstream Partners (MMLP) - our volatile, "high beta" names-all led the gains on no news.

Larger, less volatile names performed more closely in line with the Alerian MLP Index. Magellan Midstream (MMP) failed to participate in the rebound. MMP units remain grossly underpriced relative to their value. They sport a 9% yield and will be as resistant to inflation as any midstream equity. We consider MMP units among the most attractive in midstream for conservative accounts looking for income and capital preservation in virtually any economic conditions.

Separately, Kinetik Holdings (KNTK) reported on Monday that its CEO, Jamie Welch, purchased $187,401 of stock in the open market on September 30 at an average price of $32.97.

USD Partners (USDP) was the weakest performer in our portfolio, as well as our entire midstream coverage universe, as investors are growing impatient with the lack of news on the company's efforts to sign customers for its DruBit by Rail service.

Oct. 3. Western Midstream (WES), one of our holdings, and Occidental Petroleum (OXY) announced they would pursue opportunities to produce and deliver "low-carbon intensity" oil and gas products to market through carbon dioxide capture and sequestration opportunities. Under the deal, OXY will install carbon capture facilities on its drilling equipment, while WES will install carbon capture facilities on its natural gas plants. WES would also explore providing carbon dioxide transportation services. We have seen dozens of announcements like this, but we have yet to see any details from any company embracing these initiatives that they actually turn a profit. We hope WES management isn't incinerating its unitholders' capital by pursuing them.

Oct. 3. Targa Resources (TRGP), another one of our holdings, is set to join the S&P 500 stock index. Current S&P 500 member Nielsen Holdings plc (NLSN) is being acquired by Elliott Management and Brookfield Business Partners, and TRGP is on deck to join the index. As a member of the index, TRGP shares will trade more frequently and gain greater favor with institutional investors. Fundamentally, it's a non-event unless it tips the scales of the credit rating agencies to a higher rating, which we doubt. The move is also a non-event for our TRGP value range and price target.

Oct. 4. TC Energy (TRP) announced that it would begin construction of the Saddlebrook Solar Project in Alberta. TRP is investing $146 million to build its first Canadian solar power project. The project has the capacity to generate 81 megawatts, enough to power 20,000 homes per year. It involves installing solar panels on TC Energy property in an industrial park.

Oct. 6. Unrelated to the previous TC Energy news, the company's Keystone pipeline will add an additional 110,000 barrels per day of crude oil capacity starting early next month. The news was not announced by TRP but was instead reported by Argus, initially as a permanent increase in Keystone's pipeline capacity. However, the original Argus article was withdrawn and replaced by another article that reported the increase was only temporary. The new article stated that the capacity increase is related to short-term testing and not to permanent transportation volumes. Could the testing be a precursor to an increase? We're not sure, but if so, a Keystone capacity expansion would be good for TRP, given the outlook that Canadian crude oil demand is set to pick up in the Gulf Coast once U.S. SPR releases stop. 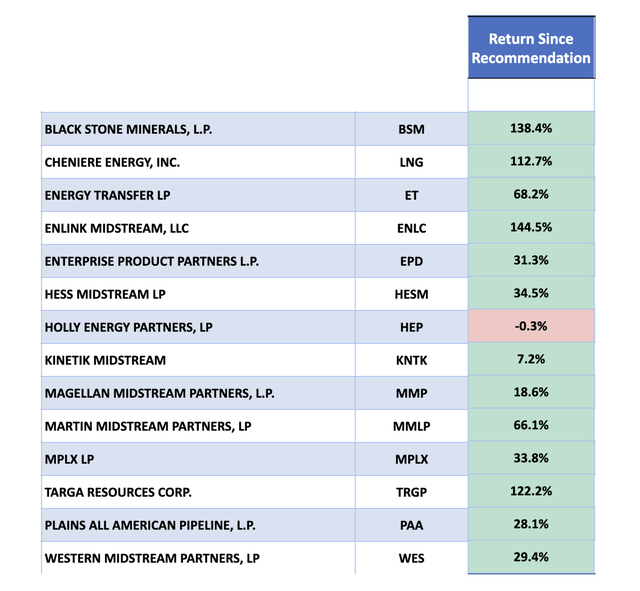