Did You Buy On Friday instead of sell. you’re doing it wrong - Again.

Everyone was pleased that there was a lower inflation number. The market was justified in going higher. Instead, it went way higher out of proportion to the news. We are talking about 1 data point. The next measure may not have any evidence of a slowdown in prices. In fact, toward the end of this analysis, I included a list of economic data for the week and it shows that we have the Producer Price Index on Tuesday the 15th. It’s a coin flip whether the PPI will reflect lower prices. Even though the Consumer Price Index is the most important, the index has gone up out of all proportion to the news. Clearly market participants had the wrong positioning, likely being short because everyone was expecting more inflation not less. So a big part of the moon shot was short covering, then the momentum traders came in. Finally, the low-information traders and investors bought shares into the market surge at the end of the day. This will not end well, as I explain below.

Going with the principle that patterns repeat, the first leg down should be about 125 to 150, or if there is real selling pressure about 200 points. I am not calling for the rally to fail. I am merely pointing out that we are going to have a bumpy ride to the upside. All these arrows point out the downward slides but if I were to map the run-ups the current one is the steepest and highest in a while. In fact, it blasted through the nearest overhead resistance line (black dotted line). If there is some great news to propel the rally higher there is a gap to be filled, I don’t believe it is going to get filled this time. I just think that the momentum to the upside has gone too far, and we could see 130 to 150 of downside. What butterfly-wing flap can cause the sell-off? How about uncertainty in the election? We still don't have the results, and it is perceived that it's good for the economy if the houses of congress are divided. Also, there's a lot of chatter that inflation has not been vanquished. The market is so overbought that it could fall off its own weight at this point. I believe the Nasdaq is up over 8% in just 3 days. For the week, the S&P 500 was up 6%, with just the last two days Nov 10 to Nov 11 the SPY was up 4%, for its best week since June. Shall I remind you what happened in June? Market participants misinterpreted the Fed statement in that these investors cheered a Fed about to pivot, then came Jackson Hole. Now we had one lighter-than-expected inflation reading, betting that the Federal Reserve would soon slow its aggressive tightening campaign. I think the same thing could happen and Powell will find another occasion to slam down the market again. The result would be the same, totally giving up the recent gains. Though this time we really did have a welcome inflation number that was lower, so perhaps we don’t give up everything. Even so, we have a lot of ground to give up and still have a higher low.

The VIX known as Wall Street’s fear gauge, fell 1 point to 22.5, hitting the lowest level since August. The VIX, which tracks the 30-day implied volatility of the S&P 500, had traded above the 30-point threshold for most of October. Comparing where the VIX was to where it is now shows how deep the complacency of the overall market is. That low VIX and all the other data I have gathered here further buttresses my case for a heavy market at the start of the week. Let me leave you with one final thought, Friday was Veterans Day, and the treasuries didn't trade, hence the DXY and the VIX dropped hard because the treasuries were stuck at 3.81% for the 10-Y, I expect all the treasuries to revert higher thereby forcing all the other indicators to weigh on the market.

What did the Dual Mind Research Community do?

We anticipated the selling into the news at the beginning of the week and simply hedged our portfolios using 3 times bearish inverse ETFs bought directly, or put options on the Bullish 3 times ETF. We covered the ETF equity 15 minutes before the CPI reveal. Then we waited patiently for the surge that would once again be so high that it was unsustainable and shorted once again. We did expect bad news in the CPI and if it did fall lower, we’d pick up shares of great stocks that much cheaper. Instead, we trimmed shares as the indexes zoomed upward instead. So as the market does swoon substantially at the beginning of this week what will we do?

My Plan for this week is to buy back shares that I sold at higher prices for hopefully a lot less.

I will buy back the expensive shares I sold thereby lowering my overall share price average. First I will repurchase shares in my tech titans Amazon (AMZN), and Alphabet (GOOGL), and if it falls far enough Microsoft (MSFT), ServiceNow (NOW), Adobe (ADBE), and Intuit (INTU). Then I will look to add more to Boeing (BA), Spirit AeroSystems (SPR), and Raytheon Technologies (RTX), and start a new position in Hexcel (HXL) if it falls hard. As far as bio is concerned I want more Jazz Pharma (JAZZ), If Lilly (LLY) falls 30 points I would add to that. If Seattle Genetics (SGEN), or Incyte (INCY), show a good price I would favor them too. All these are current positions besides HXL. If Deere (DE) falls into the mid-300s. I would start a position there. I am looking at CNH Industrial (CNHI) and AGCO Corporation (AGCO), its competitors and if they fall hard I might add to them instead. I want to build out industrial names where I see the potential for growth. Agriculture will be strong for several years even when the war in Ukraine ends. That is why I am focused on BA and its suppliers. I think they have a clear runway (pun intended) for growth. Finally, if I have funds left I would add to Confluent (CFLT), and HashiCorp (HCP), but I want 5% cash left over so that is a tall order.

Since I compared regional banking being the next “oil” sector, I haven't addressed it yet. I still believe that regional banks are going to be a hot sector, are already a hot sector. Like my mother used to say, "You can't dance at every wedding". At some point, I will build a position in a few names, though likely in my investment account where I value dividends, over growth. I think banks really take off when subsequent rate rises really do fall off.

This week’s earnings are pretty slim

The only earnings that interest me are Home Depot (HD) on Nov. 15 Lowe's Companies, Inc. (LOW), NVIDIA (NVDA) on Nov. 16, and Palo Alto Networks (PANW) on Nov 17. It would be interesting to see how HD and LOW do. Also NVDA, and PANW. If PANW falls hard, and its Earnings/Revenue meets expectations. Even if they sandbag the forward guidance there could be some alpha in that name. I don't care where the economy is going, cybersecurity is not going to be cut. PANW is a comprehensive solution that could be much more cost-effective. I said this before, I prefer cybersecurity stocks are specialist best of breed but in this environment, I can see PANW outperforming. As far as HD and LOW, I think it is interesting not because I would want to get involved, but because it does say something about home improvement, and construction demand. We also have Walmart (WMT), BJ's Wholesale (BJ), Target (TGT), TJX Companies (TJX), and Ross Stores (ROST), but just for sussing out the consumer’s desire to spend.

If you enjoy my weekly stock analysis articles, You will be happy to learn that I offer a subscription service Dual Mind Research. Serop Elmayan, a brilliant young man who brings a quantitative approach to surface high probability fast-money trades, and I are partners in this service so you get the benefit of two unique investing approaches. My narrative style and his engineering approach will give you a unique value indeed. The first 2 weeks are free so check it out today for our latest ideas. 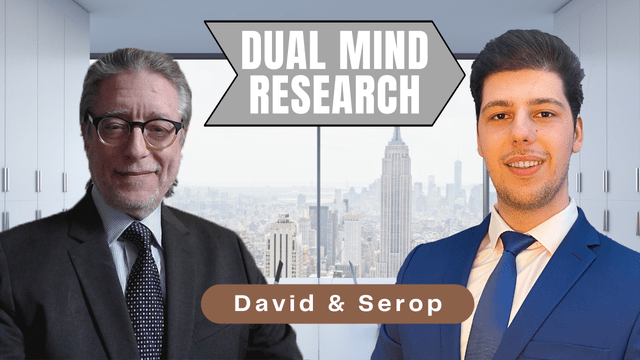 David H. Lerner
28.36K Followers
Author of Dual Mind Research
Proven quantitative & qualitative strategies generating consistent returns
I have been writing about stocks for about a decade. I take a multi-disciplined approach but I am not doctrinaire. I come from a technology background having a software consulting business for a number of decades and also took part in business development for tech media startups. I employ technical analysis when it's called for. I believe that market psychology plays a huge role. My favorite explanation for charting is that charts are essentially a psychograph of sentiment about a stock. Market participants rely on narratives to explain a stock's appeal. If you can identify a narrative or trend as it is forming that can pay outsized rewards. I have an eclectic style and it might take you a few articles to "get" me. We now offer a subscription service: Dual Minds Research. I am partnering with Serop Elmayan, a quantitatively oriented trader that takes an engineer's approach to setting up trades. The chat room opens at 5 am. I have already been up since 4 am scouring the news feeds, commodities, and futures to suss out how the day will start,  I provide live minute-by-minute updates on the standard indicators and a few that we surface on our own. The chat officially closes at 430 pm, but I will often check at around 8 pm to post updates. Our Community utilizes the Cash Management Discipline, a simple trading style that we use as a discipline to counter the wild volatility we have to deal with today. Trading ideas will be surfaced almost daily. Serop will only provide trades that he has determined to have a high probability of success. Check us out.

Disclosure: I/we have a beneficial long position in the shares of BA either through stock ownership, options, or other derivatives. I wrote this article myself, and it expresses my own opinions. I am not receiving compensation for it (other than from Seeking Alpha). I have no business relationship with any company whose stock is mentioned in this article.

Additional disclosure: I own shares in these names ADBE, AMZN, CFLT, GOOGL, HCP, INTU, JAZZ, LLY, MSFT, NOW, NVDA, RTX, SGEN, SPR.
Please note: You should not take the above text as investment advice. I am not a broker, Registered Investment Advisor, or certified money manager, I cannot give financial advice. What I am doing is chronicling my thought process. If I use the word you in a sentence, I am really talking to myself, or it was a simple typo, in no way did I mean to advise you. Always do your own research and understand what you are buying, and what your risk is, and be sure before you make a purchase. Also, only trade what you can afford to lose.