Every now and then, I find it worth taking a big step back and looking at the "big picture" of where the best investment opportunities are around the world. A portfolio implementation of this is a "Make My Dow" approach, where instead of 30 domestic stocks, you pick 1-3 "national champions" from each of 10-30 different markets around the world, and in doing so build your own portfolio of world-class blue chips whose global growth you can track, dividend by dividend. Since 2022 has been my first year since 2019 that I have been able to resume my extensive international travel, I thought my year end articles should include this "World Tour of Blue Chips", where I highlight just one stock from each of 10 markets where I currently see plenty of opportunity. These 10 stocks can serve as a "starter" international portfolio for investors who believe owning a few good companies you know is better than owning hundreds or thousands of companies you don't know.

Spoiler: my top pick of these ten is UK-based Unilever PLC (NYSE:UL) in part because I believe it is a simple global business that can serve as a benchmark for the others, but also for diversification and currency reasons I will describe below.

Why do a "World Tour of Blue Chips"

Anyone who has known me for any period of time knows I prefer to look around the world at different international markets to find the best blue chips in each. Over time, I've come to see my readiness and willingness to cross borders as a more and more significant advantage over spending too much time in any one country. In other words, I often find more of an advantage comparing top companies in two different countries, rather than trying to pick between top companies within a given country. This is because I have noticed many mental and institutional barriers that keep many investors from, say, selling Apple Inc (AAPL) and buying Samsung (OTCPK:SSNLF) even if the latter seems much better valued.

The below chart from Barclays shows the historic and current Cyclically Adjusted Price-to-Earnings, or "CAPE", ratio measuring the relative valuation of nine selected stock markets relative to 10 years of average inflation-adjusted earnings. By this measure, the US is significantly more expensive than eight other markets where I will list blue chip opportunities in this article, with only India averaging more expensive equities than the US. This picture tells me, at a high level, that the odds seem in my favor for picking a top name like Samsung from a cheaper market like Korea, versus picking AAPL from an expensive market like the US.

I have deliberately left China out of this world tour because I see the opportunities there as too varied and nuanced to include in the scope of a "quick picks" article like this one. For these other 10 markets, I have picked one blue chip name I think provides a special opportunity from that market, and conclude with why UL is my largest holding of these 10.

Japan remains by far the largest country weight in the Vanguard Total International Stock ETF (VXUS) because it remains a very large and well developed market rich with opportunities. As the above CAPE chart shows, this market went from being significantly more expensive than the US from the 1980s through the 2000s, to now having a CAPE ratio almost 30% below that of the US market. While many of Japan's best known blue chips may not have the global dominance they seemed to have in the 1980s and 1990s, one name I do think is worth continuing to highlight here is leading camera brand Canon Inc. (CAJ). The below chart from CAJ's 2021 annual report shows Canon as the 3rd largest holder of US patents. Many of these patents and 55% of revenues come from printing, which I expect to be competitive and lower margin, but the rest comes from wider moat areas like imaging and medical technology.

Canon's dividend was 115 yen per share over the past 12 months, and the current price of around 3,100 yen per share presents a healthy 3.7% yield with some room to grow, especially with the benefit of the weak yen.

Moving over to Korea, we can pick the top name there which is also #2 on the above list of US patent holders just above Canon: Samsung Electronics. This is the electronics arm of the larger Samsung Chaebol, but alone is the single largest holding in the iShares MSCI South Korea ETF (EWY) at 22%. While 16x forward earnings makes this more expensive than the average Korean stock, the well above average global presence of the Samsung name and its technologies make it a clear top blue chip pick from this peninsula.

Singapore is a market I used to frequent, and I was very happy to have the chance to go back and visit two weeks ago for the first time since early 2020. The market itself is relatively small and concentrated in financials, real estate, and logistics, though for anyone new to this market, I recommend starting with the three big blue chip banks, all of which have diversified exposure across Southeast Asia. The Overseas-Chinese Banking Corporation (OTCPK:OVCHY) is my current top pick of the top three, primarily because of the dividend hike over the past year. I used to joke that OCBC stands for "over-charging business customers", because their high fees got me to switch my own account there to a competitor, but I've seen how many of their customers pay these fees and don't bother switching.

A short ferry ride from Singapore takes us to Indonesia, where my current top pick is PT Indofood Sukses Makmur Tbk (OTCPK:PIFMY). Indofood is a blue chip food brand across Southeast Asia, and after three years of keeping its dividend at 278 rupiah per share, I see strong food prices versus a weak rupiah feeding likely future dividend increases.

Across the Bay of Bengal to what has become the world's fastest growing large economy, I pick a top blue chip doing one of the many things India is probably best known for: IT outsourcing. That company is Infosys Limited (INFY), which like the overall Indian market, might be considered expensive at 27x forward earnings, but I see this is the name to own in technology manpower at the right price.

In what looks like the cheapest of these markets on a CAPE basis, Turkey, my pick is the Ford subsidiary Ford Otomotiv Sanayi A.S. (OTCPK:FOVSY). This is a blue chip mostly because of the Ford name, and combines the advantages of its parent with its position in a dynamic if risky market well positioned between Europe, the middle east and Africa. I started buying earlier this year below 100, and regret not buying more, but still see it as well valued with its yield around 5%, a premium with likely more growth ahead than its parent.

South Africa is another market that has popped up on my dashboard in recent months as having many well-valued and profitable opportunities. For now, my top pick here is the local subsidiary of Dutch grocery retailer SPAR Group (OTCPK:SGPPY). Again, I consider this a blue chip mostly because of the brand of its parent, which I see all over Europe, and unlike many other names in South Africa, isn't as exposed to the volatility of mining and mineral prices.

Another name I've seen all over Europe this year is that of Sweden-based global security provider Securitas (OTCPK:SCTBY). The share price is down significantly this year, despite consistently maintaining its annual dividend at over 4 krona per share over each of the past 5 years, and the two reasons this isn't my top pick over Unilever are:

The one blue chip name I have talked more about over the past year than any other is consumer products giant Unilever Plc, with a brand portfolio I'm sure many readers here use every day. UL has very profitable subsidiaries in Indonesia, Bangladesh, India, Pakistan, Nigeria, Cote d'Ivoire, and Ghana just to name a few, but I focus on the parent because it is well-priced and diversified, as well as being the most liquid. I also believe the benefit Unilever enjoys from having many of its sales in stronger currencies like dollars, but its accounts in weaker currencies like pounds and euros, is only starting to get priced in with the bounce in its stock price over the summer. I see the EUR 0.4268 quarterly dividend as very well covered by its earnings and likely to resume hiking over the next year or two, after management assesses any impact of higher rates.

Finally, I finish at the US's doorstep with an American blue chip name, but via its less expensive subsidiary south of the border: Kimberly Clark de Mexico (OTCPK:KCDMY). My view here is simple: the US's working age population is starting to level off, while Mexico's is continuing to grow at a healthy rate, and that working age population growth is key to Kimberly Clark's revenue growth on both sides of the border. As long as faster growth potential KCDMY trades at a significant yield premium to Kimberly-Clark Corp (KMB), I'll continue accumulating more of the former.

2022 has presented investors with many world-class blue chip names at reduced prices from last year, and this has been especially true for investors with strong dollars ready to invest in cheaper foreign stocks with expenses in weaker currencies. The above list is just 10 of these names from 10 different markets I am looking at the moment, but my top blue chip pick of these that I recommend any reader start with, if you haven't already, is Unilever. One factor I have named as making most of these 10 names attractive is a strong dollar, and UL does this with the most global diversification (covering all 10 markets listed above and many more). On top of that 3% yield, the dividend is currently expected to grow from $1.60 to $1.81 over the next two years, a growth rate of 6% per year, which on top of the 3% yield indicates a 9% expected rate of return. That remains a good blue chip yield in any currency.

Non-US markets cover 75% of the world's economy, 90% of IMF expected GDP growth, and 95% of the world population.  That's most of my time and money is invested outside the US, where I have lived most of my life and find opportunities to share with you.  See how to improve your international stock strategy with your free trial to The Expat Portfolio. 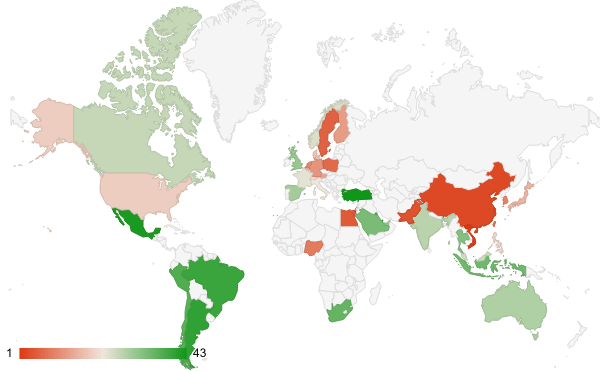 Tariq Dennison TEP runs a registered investment adviser focused on international clients and portfolio strategies. His marketplace service "The Expat Portfolio" shares his on-the-ground experience as an expat investing in diverse foreign markets. Tariq is the author of the book "Invest Outside the Box: Understanding Different Asset Classes and Strategies".  He lives in Central Europe, and teaches two classes at the Masters in Finance program at ESSEC Business School in Singapore.

Disclosure: I/we have a beneficial long position in the shares of AAPL, CAJ, SSNLF, EWY, OVCHY, PIFMY, INFY, FOVSY, SGPPY, SCTBY, UL, KCDMY either through stock ownership, options, or other derivatives. I wrote this article myself, and it expresses my own opinions. I am not receiving compensation for it (other than from Seeking Alpha). I have no business relationship with any company whose stock is mentioned in this article.