Vical (VICL) announced today that researchers at Ehime University in Japan and their collaborators have developed a Vaxfectin-formulated DNA vaccine candidate with the potential to prevent transmission of malaria.

According to Medicinenet, malaria is an infectious disease caused by a parasite, Plasmodium, which infects red blood cells. Malaria is characterized by cycles of chills, fever, pain and sweating. Historical records suggest malaria has infected humans since the beginning of mankind. Roughly 2 million people die each year worldwide due to Plasmodium infections. The majority are children under the age of five years in sub-Saharan African countries. As astounding as it sounds, there are about 400 million new cases per year worldwide. Most people in the U.S. diagnosed with the disease contract infections outside of the country, usually while living or traveling through an area where malaria is endemic.

Several factors determine the treatment regime used in any given situation, but it basically boils down to what species of Plasmodium parasite is involved, the clinical situation (child, adult, pregnant), and the susceptibility of the parasite to specific treatments. The latter is a function of the geographic area in which the infection was acquired. But treatment is difficult. Aralen (chloroquine phosphate) usually is the drug of choice, but several malaria strains are resistant to chloroquine. Other protocols may involve the use of such drugs as Vibramycin, Oracea, Adoxa, Atridox, Achromycin, Cleocin and Malarone. Unfortunately, no treatment is universally effective, and the search for a promising drug class continues.

Enter Vical. The company and researchers at Ehime University in Japan and their collaborators have developed a Vaxfectin-formulated DNA vaccine candidate with the potential to prevent transmission of malaria. Results of the initial testing, recently published in the journal Vaccine1, demonstrated that the malaria parasite life cycle was interrupted in mosquitoes fed with malaria-infected human red blood cells incubated with serum from vaccinated mice. Vical provided the DNA vaccine plasmid backbone and the adjuvant used in the research.

Here's how the vaccine works. The transmission-blocking DNA vaccine candidate, formulated with Vical's Vaxfectin adjuvant, expresses the Plasmodium vivax malaria parasite protein Pvs230, which is present in both human and mosquito stages of the parasite's life cycle. Anti-Pvs230 antibodies generated by vaccinated mice recognized the Pvs230 protein and interrupted the parasite's development in mosquitoes. The mouse-generated Pvs230 antibodies, incubated with P. vivax-infected human red blood cells and then fed to mosquitoes, statistically reduced the number of parasites and the infection rate in mosquitoes.

According to the company, this novel transmission-blocking approach could be used to protect a broad segment of the population from widespread malaria outbreaks.

As seen in the daily chart below (courtesy StockCharts.com), the stock made a double bottom in March just below $3.00, and has since rebounded, breaking through the 50-day moving average on the news of the malaria vaccine discovery. Both the Relative Strength and the MACD are positive. Resistance looms at $3.65, the 200-day moving average. 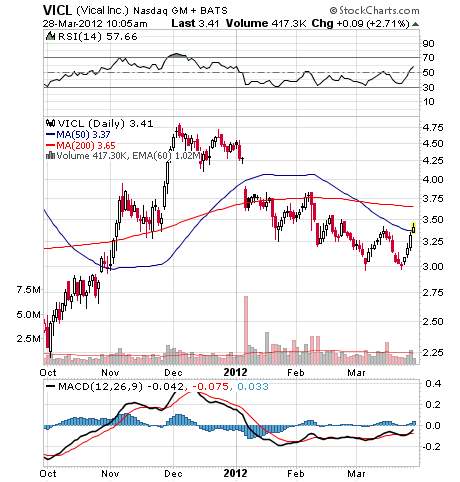 On a weekly basis, the stock appears to be trapped in a trading range between the 50- and 200-week moving averages, with resistance at $3.68, close to the 200-day moving average. Relative Strength and the MACD are weak. A close above $3.70 would indicate the start of a new uptrend. 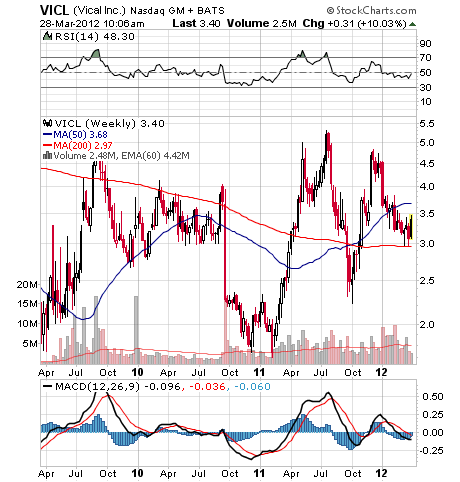 Additional disclosure: I am long VICL and will not alter my position within 72 hours of the time of publication of this article. Material presented here is for informational purposes only. Consult your financial adviser before making investment decisions. Investing includes risks, including loss of principal.

Theodore Cohen
720 Followers
Theodore J. Cohen, Ph.D., a research scientist, has been an investor for more than 50 years. Since 1980, he has focused his attention on investment research and investigative analyses of companies developing therapeutic drugs in the biotech sector. Dr. Cohen is a frequent contributor of Guest Opinions (op-ed pieces) to the Bucks County (PA) Courier Times (circulation: 80,000), where, since 2007, he has addressed such varied subjects as the conflicts of interest (COIs) associated with two members of the Provenge advisory committee (AC); the U.S. Senate’s Durbin Amendment, to tighten COI reviews of FDA AC members; and naked short selling. Cohen is the author of the award-winning novels Death by Wall Street: Rampage of the Bulls (AuthorHouse, 2010) and House of Cards: Dead Men Tell No Tales (Outskirts Press, 2011), which were inspired by real events. The books are available from Amazon.com, B&N, and 26,000 online bookstores worldwide. For details, see http://www.theodore-cohen-novels.com.