The firm is well-known for its strong track record and fundamental, research-driven investment approach. Almost three-quarters of its assets deployed in the healthcare sector, with most of the remaining third in healthcare associated companies in other sectors such as medical insurance and software companies, and some in companies from other sectors that have a significant portion of their business in the healthcare sector. The fund is relatively concentrated in just 54 companies at the time of its 13-F Q4 filing, with a third in large-caps, another 40%-45% in mid-caps, and the remaining 20%-25% in small-cap and micro-cap equities.

We analyzed HealthCor's equity holdings in its Q4 13-F to determine its highest conviction bets (see Table), selecting the largest buys and sells in size, where the buy/sell is also a significant proportion of its prior quarter position in that company. Based on that analysis, the following are its high conviction bullish positions, that are also trading at a discount to the peers in their group (see Table):

Express Scripts Inc. (ESRX): ESRX is a provider of pharmacy benefit management services in North America, to managed care organizations, employers, insurers and administrators. This was HealthCor's largest buy in Q4, adding $119 million to its $1 million prior quarter position in the company. ESRX shares are surging today on news that the FTC, after an eight-month investigation, cleared its proposed merger with Medco Health Solutions (MHS), another company in HealthCor's portfolio in which it added a new $35 million position in Q4. ESRX shares are currently trading within striking range of its all-time highs at 13-14 forward P/E and 10.6 P/B compared to averages of 16.4 and 3.1 for its peers in the medical services group, while earnings are projected to grow from $2.96 in 2011 to $4.17 in 2013 at an annual rate of 18.7%.

St. Jude Medical (STJ): STJ develops cardiovascular medical devices for cardiac rhythm management, atrial fibrillation, cardiac surgery, cardiology and neuromodulation. This was HealthCor's second largest buy in Q4, adding $114 million to its $85 million prior quarter position. STJ shares currently trade at 11-12 forward P/E and 3.2 P/B compared to averages of 29.4 and 3.9 for its peers in the medical products group. In the latest Q4 it reported at the end of January, STJ beat analyst revenue and earnings estimates, but guided Q1 and FY12 EPS slightly below estimates; the company is scheduled to report its Q1 results two weeks from now, on April 18th.

Zimmer Holdings Inc. (ZMH): Zimmer develops orthopedic and dental reconstructive implants, and fracture management products. This was HealthCor's largest buy in Q3, and in Q4, HealthCor added another $80 million to its $103 million prior quarter position. ZMH shares have performed well this year, up almost 25% YTD, and in its latest Q4 reported at the end of January, it beat analyst revenue and earnings estimates; its shares currently trade at 11-12 forward P/E and 2.1 P/B compared to the averages of 28.7 and 3.9 for its peers in the medical products group.

Other high conviction buys by HealthCor, that are also trading at a discount to the peers in their group (see Table):

Furthermore, HealthCor also added a new $24 million position in Ariad Pharmaceuticals Inc. (ARIA), that is engaged in the development of drugs that treat aggressive and advanced-stage cancer by regulating cell signaling with small molecules.

The following are HealthCor's high conviction bearish picks based on its Q4 selling activity (see Table): 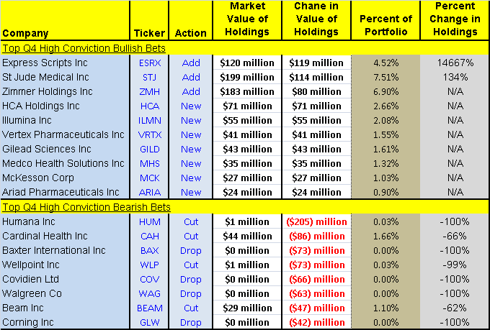 Credit: Historical fundamentals including operating metrics and stock ownership information were derived using SEC filings data, I-Metrix® by Edgar Online®, Zacks Investment Research, Thomson Reuters and Briefing.com. The information and data is believed to be accurate, but no guarantees or representations are made.

Disclaimer: Material presented here is for informational purposes only. Nothing in this article should be taken as a solicitation to purchase or sell securities. Before buying or selling any stock you should do your own research and reach your own conclusion. Further, these are our 'opinions' and we may be wrong. We may have positions in securities mentioned in this article. You should take this into consideration before acting on any advice given in this article. If this makes you uncomfortable, then do not listen to our thoughts and opinions. The contents of this article do not take into consideration your individual investment objectives so consult with your own financial adviser before making an investment decision. Investing includes certain risks including loss of principal.

GuruFundPicks
2.48K Followers
GuruFundPicks.com offers top buy & sell picks based on the collective or Consensus Picks' of over 330 of our hand-picked top hedge & mutual fund managers, incl. 78 legendary or guru fund managers, 27 of the world's largest or mega funds, 165 sector-focused funds (in gold, biotech, tech, energy, consumer, finance & REITs), 59 billionaires, 54 new masters and 40 tiger, 52 shareholder activist and our Winners Circle Top 100 Performing Hedge Fund Managers (updated quarterly). We offer market-beating tools and services including Consensus Picks' DIY Tools, Top 20 Small-Cap and Top 30 All-Cap Long/Short Newsletters based on the Consensus Picks system, and Trade Alert Services for Self & Auto-Trading. All of our services have beaten market averages by wide margins. See our website GuruFundPicks.com for the latest performance numbers, or contact us at support@GuruFundPicks.com. The two authors are co-managers of a family partnership long/short equity fund since 2001, that have a successful track record in trading primarily small-cap aggressive growth companies based on a fundamental valuation analysis of current news, including quarter reports, guidance, biotech clinical study results and other news. The junior partner is a self-taught private investor with a Business degree from the New York University's Leonard N. Stern School of Business and the senior partner has an MBA from the University of Virginia Darden School of Business, including prior MS & BS (Engg.) degrees, and with experience in business strategy consulting to large fortune 100 companies. We are generally sector and market-cap agnostic, identifying opportunities using a 'stock picking' bottom-up, fundamentals-based, valuation-driven approach. However, we find most opportunities in the small-cap space, in technology & healthcare sectors, with some also found often in the consumer, energy & basic materials sectors. Follow us on Seeking Alpha and Twitter (@GuruFundPicks), and connect with us on LinkedIn (http://www.linkedin.com/in/manishbabla)