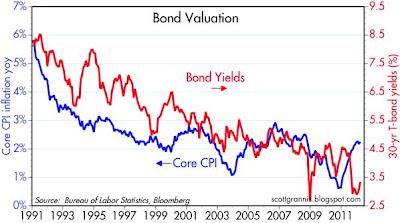 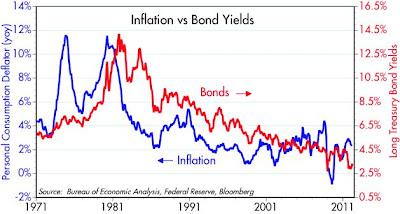 The purpose of these two charts is to show that the bond market is not always right when it comes to inflation. From a long-term perspective (e.g., 50 years), the yield on risk-free Treasuries of 10 years' maturity or more has averaged about 2.5 percentage points above inflation. This is rational, because while Treasuries are default-free, tying one's money up for a multi-year period puts the investor at risk of receiving a return that fails to maintain the purchasing power of his funds. So moving out the Treasury yield curve should give an investor some modest expected real return, and 2.5% sounds about right. But over shorter time frames, it doesn't always work this way.

The top chart compares the yield on 30-year Treasuries to the Core CPI, and the bottom chart compares the same yield to the PCE deflator, which is a broader and somewhat more volatile measure of inflation than is the core CPI. Both charts are set up to show that when yields and inflation converge, that is equivalent to a 2.5 percentage point expected real rate of return. In other words, when the two lines are on top of each other, bonds are arguably fairly valued.

But bonds are not always fairly valued, as should be obvious. Bond yields were way below where they should have been in the 1970s, mainly because investors were slow to raise their expectations for inflation as actual inflation exceeded expectations. By the early 1980s, however, everyone knew inflation was a big problem and so the yield on long bonds rose to levels that exceeded inflation by a substantial margin. (I was lucky enough to realize this at the time, and bought 30-year Treasury strips yielding over 11% for my IRA account which I sold 10 years later for a 300% profit.)

Then, as inflation gradually subsided over the course of the 80s and 90s, bond yields slowly declined as well, until they reached something close to fair value by the early 2000s. Since then - a period that began around the time when the Fed started easing in earnest in 2002 - bond yields have been at or below fair value more often than not, and especially in the past year. Over the course of the past year, inflation has settled in around 2-2.5%, but long bond yields have dipped to 3%, and 10-year Treasury yields today are only 2%.

Buying Treasury bonds at today's yields is not a very attractive proposition, since recent inflation and inflation expectations are higher than most of the Treasury yield curve. For example, the CPI has averaged 2.7% per year for the past two years; the 5-year, 5-year forward inflation expectation embedded in the Treasury yield curve is 2.6% today, and has averaged 2.6% over the past year; and the 10-year expected inflation rate embedded in TIPS is 2.3%. So if inflation comes in around expectations, buying the long bond today at 3.15% gives you an expected real return of just over 0.5% per year, whereas buying the 10-year Treasury today gives you a negative expected real return.

With Treasury yields this low relative to inflation, it only seems reasonable to conclude that the market is willing to pay a premium for the safety of Treasuries, and that premium in turn is motivated by deep concerns over the economy's ability to grow. Investors are content to accept the likelihood of a negative real rate of return in exchange for protection against default, and paying a premium for protection against default only makes sense if you are really concerned that a weak economy is going to significantly increase the risk of defaults.

This is why I see today's Treasury yields as a very good indicator that the market is still dominated by fear rather than by optimism. I think the economy is very unlikely to deteriorate significantly, but neither do I see it being very strong. But since the market is dominated by fears of weakness, my view makes me effectively an optimist.