For example, if a stock has a current yield of 4% and a DGR of 10%, then the YOC after 10 years would be: YOC = 4 * (1 + 10/100) ^ 10 = 10.4%. Future YOC can be used as a screening criterion if an investor looks for dividend growth stocks that may produce a certain minimum YOC after a certain time period. In previous articles on Seeking Alpha, there has been a focus on the criterion of achieving a 10% YOC after 10 years:

A critical assumption underlying the use of future YOC in stock screening is that the past DGR for a company is a reasonable estimate of its future DGR. If that assumption is invalid, then the calculated future YOC would be misleading. The purpose of this article is to examine that assumption by looking at the relationship between past and future DGRs in actual data.

A Trip Back In Time

Imagine you were looking for dividend growth stocks back in early 2002, in the midst of the collapsing tech bubble. Let's assume you had access to a modern-day equivalent of the Dividend Champions List maintained by David Fish, so you had information on dozens of dividend growth stocks, including their 10-year DGRs from 1991-2001. You searched for dividend growth stocks that might give you a certain YOC (e.g., 10%) after 10 years, which would correspond to the end of 2011. This would have been done by using the 10-year DGRs from 1991-2001, which I will refer to as the past DGRs, to estimate the 10-year DGRs from 2001-2011, which I will refer to as the future DGRs because they were unknown at that time. However, with the benefit of hindsight, we now know the actual DGRs from 2001-2011. Thus, we can investigate the extent to which the past DGRs were good estimates of the future DGRs.

To conduct this analysis, I went to the Dividend Champions List and identified all companies that had dividend growth streaks longer than 20 consecutive years. These are companies that increased their dividends continuously from 1991 to 2011, although many of the streaks started much earlier. I used the dividend data from 2001 and 2011 to calculate the future DGR that was actually achieved by those companies. I then went to the website of Robert Allan Schwartz and found the dividend data for 1991 (and verified the data for 2001 and 2011), which allowed me to calculate the past DGR achieved by those companies. I also used Yahoo! Finance to check some of the data. (I thank David Fish and Robert Allan Schwartz for making their excellent data sources freely available and giving me permission to use them for this analysis.)

I was able to find all the relevant data for a total of 114 companies. These companies include well-known dividend growth stocks such as Abbott Laboratories (ABT), AT&T (T), Chevron (CVX), Coca-Cola (KO), Johnson & Johnson (JNJ), PepsiCo (PEP), Procter & Gamble (PG), and Wal-Mart Stores (WMT). In the next section, I present the results of my analysis of this data set. I conducted several statistical tests, but I will keep the statistical jargon to a minimum and merely indicate whether certain differences are statistically significant according to these tests, meaning that they are unlikely to be due to random variation. For readers who are not especially interested in the detailed results, key points from the analysis are indicated in bold font.

Summary statistics for all 114 companies are provided in Table 1. 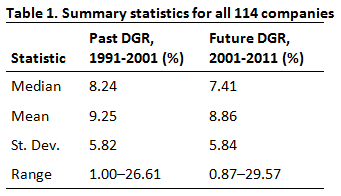 There is very good consistency between past and future DGRs, which have similar medians, means, standard deviations, and ranges. The small difference between means is not statistically significant, which indicates that DGRs averaged about 9% over both time periods. Thus, at a group level, the overall past DGR was a good estimate of the overall future DGR. However, we are more interested in the DGRs of individual companies than those of the group.

The figure below shows the past and future DGRs for the 114 companies, each represented by its own point. The x-axis of the figure indicates a company's past DGR (from 1991-2001) and the y-axis indicates its future DGR (from 2001-2011). I have labeled the companies with DGRs greater than 20% during either time period. 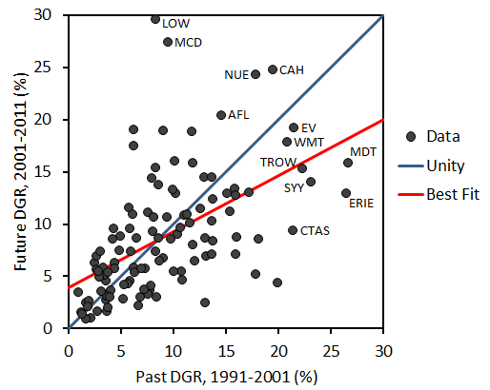 The red line labeled Best Fit in the figure is the best-fitting straight line to the data, which has a slope of 0.54 and an intercept of 3.90. The slope of less than 1 reflects the combination of two aspects of the data. First, companies with relatively high past DGRs were generally unable to maintain such high DGRs in the future. These are the companies with high past DGRs that fall below the blue line. Second, companies with relatively low past DGRs tended to maintain or increase their DGRs in the future. These are the companies with low past DGRs that fall on or above the blue line. Together, these different trends resulted in the shallower slope of the red line that was fit to the data.

To provide more insight into those changes in DGRs, Table 2 shows results from dividing the 114 companies into two equal-sized groups based on whether they had low or high past DGRs (using a median split).

I analyzed the data in a few other ways, looking at differences by current market capitalization (I did not have historical market cap data), and by sector. I am omitting the detailed results in the interest of brevity, but I will note that I did not find any evidence that DGRs were constrained by the Law of Large Numbers. Overall, companies with larger market caps did not tend to have future DGRs that were markedly lower than their past DGRs; in fact, the average difference was in the numerically opposite direction. This was also the case for the eight companies with current market caps larger than $100 billion. The data set was not large enough to do a thorough analysis by sector, but I noticed that 13 of the 18 financials (banking, insurance, and financial services companies) had lower future DGRs than past DGRs, as was the case for four of the five REITs. In contrast, all three oil and gas companies had higher future DGRs than past DGRs, as was the case for 11 of the 18 utilities.

As with any analysis of historical stock data, this analysis is subject to various limitations. To head off astute commentators, I will mention three major limitations:

The results of this analysis indicate that past DGRs were modestly predictive of future DGRs, but with the important caveat that companies with high past DGRs tended to have reduced (but still relatively high) future DGRs. Companies with low past DGRs tended to either maintain or slightly increase their DGRs in the future. Thus, when it comes to calculating future YOC as part of a screen for dividend growth stocks that might give a 10% YOC in 10 years, I recommend the following approach:

For stocks with relatively low past DGRs (< 8%), the past DGR is probably a reasonable value to use when estimating future YOC.

For stocks with relatively high past DGRs (> 8%), a discounted value of the past DGR should probably be used when estimating future YOC. One approach would be to use the equation for the red Best Fit line in the figure, which is:

Whether future YOC is a useful measure for screening dividend growth stocks is debatable, much like YOC in general. The intention of this article was not to settle this debate. Instead, I examined the relationship between past and future DGRs, finding a moderately strong positive correlation and identifying trends that may inform the selection of dividend growth stocks. Thus, before investors go on shopping sprees with their 10 x 10 lists, they should recognize that past DGRs are not perfectly predictive of future DGRs.

Dividend Growth Machine
3.41K Followers
I am a 40-year-old investor and a professor at a university. I have been following a value-oriented dividend growth investing strategy since 2012. I have written occasional reviews on Seeking Alpha about my portfolio and investing progress.
Follow
91 Comments
To ensure this doesn’t happen in the future, please enable Javascript and cookies in your browser.
Is this happening to you frequently? Please report it on our feedback forum.
If you have an ad-blocker enabled you may be blocked from proceeding. Please disable your ad-blocker and refresh.