On Friday October 26, 2007 Google's stock price (NASDAQ: GOOG) closed at $674.60, up nearly seven-fold from $100.34 at the close of trading on the first day of its IPO on August 19, 2004. By comparison Microsoft's price (NASDAQ: MSFT) closed at $35.04, up fractionally from $27.12 during the same time span. There were no stock splits during this period to distort the comparison. Is this just another example of irrational exuberance? Or are there fundamental differences between this blue ocean superstar and its red ocean competitor?

But wait you say. Google and Microsoft are not really competitors. Google runs a search engine and Microsoft sells packaged software. Make no mistake: the overlap in their current offerings may be slender in the competition for customers, but millions of decisions are made every day by investors about whether to buy/sell their common stocks. And it is in capital markets where the low hanging fruits of customer satisfaction are to be found.

SOME BACKGROUND
This is the 5th and final post in my series on the competition between a blue-ocean superstar (Google) and its red-ocean rival (Microsoft). This one, like the earlier posts in the series, was inspired by Blue Ocean Strategy, the book by Professors Kim and Mauborgne of the INSEAD business school in Fontainebleau, France.

In this post I forecast each company's stock price following their March quarterly reports to be filed with the SEC in late April 2008. Unlike all other stock pricing models, my competitive stock valuation prices a stock from the top down, rather than the bottom up. Introduced in Chapter 9 of my book Competing for Customers and Capital, competitive valuation assumes all ships rise and fall with the tide. So the sales revenue and market value of competitors are first combined and then parsed out according to their relative earnings productivity [REP] and risk-adjusted (value sales) differentials [RAD].

The 1st post in this series was "Microsoft Optimizing "Red Ocean" Expenses." In it I mapped enterprise marketing expenses onto the sources of intangible market value and introduced a simple measure of how shareholders know if they're are getting their money's worth on "red ocean" spending. In the 2nd post on "Microsoft vs. Google: The New Battle for Your Network" I argued that however appealing blue oceans may be, nearly every company ends up in a sea of red ocean expenses. At that point the most compelling question is how to manage expenses in this environment. Theoretically, the best way to do this is to "optimize" these costs. The 3rd post in the series was "Google vs. Microsoft: Blue/Red Ocean Earnings Productivity." That one addressed a larger question: are there significant differences between the earnings productivity of "Blue Ocean" compared with "Red Ocean" companies? The short answer is, yes at least in the case I am currently reviewing. In the 4th post on "Google vs. Microsoft: Crossing the Blue-Ocean, Red-Ocean Divide" I pulled back the curtain to reveal the often subtle and complex relationships between the sales revenue and market value of competitors.

GOOGLE'S BLUE OCEAN TACK
Of the many points on an investor's compass only one directs a company on a blue ocean tack: it points to the northeast. This is the only direction in which both relative earnings productivity and risk-adjusted differentials increase simultaneously. Since its IPO Google has become a textbook case in northeast blue ocean tacking. This chart documents that classic pattern. 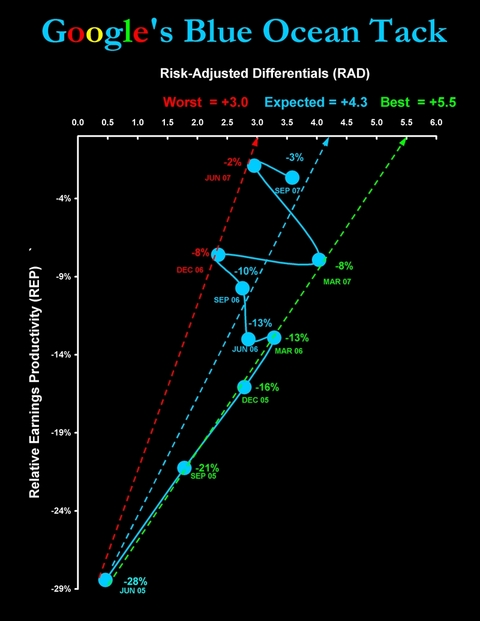 The blue markers in this chart reveal a pattern that is exactly like a sailing ship tacking toward a northeast destination against a strong, variable wind. The red and green dotted lines create an envelope defined by the limits of Google's westward and eastward tacks respectively. By projecting these coordinates into future quarters we define the company's worst (+3.0) and best (+5.5) case risk-adjusted differentials. The dotted blue line defines the expected case (+4.3) as the midpoint between the worst and best cases.

GOOGLE'S SHARE PRICE IN APRIL 2008
If Google management continues to maximize earnings in its competition with Microsoft it should capture 26.9% of revenues by the end of March 2008. In this event investor's would likely bid up its share of market value to 45%. Currently with a risk-adjusted differential of 4.3 and an enterprise risk of 4.3 Google's forecast market value is $254.7 billion. The same values of RAD and enterprise marketing risk in the expected (blue) case are entirely coincidental.

If the number of shares outstanding is unchanged Google's share price under the expected scenario should hit $821 in late April 2008. The worst (red) case and best (green) case prices, as defined by the risk-adjusted differentials in the chart above, are $723 and $919 respectively.

In two earlier posts I explained in detail how the competitive stock pricing model works. See "ICE-CME Exchange Wars: A Mexican Standoff?" and "Is Competition a New Risk Factor in Morgan Stanley's World?"

MICROSOFT'S RED OCEAN DRIFT
The way Microsoft management navigated its red ocean is more like an aimless drift than a purposeful tack. The next chart shows the pattern of coordinates in Microsoft's relative earnings productivity and risk-adjusted differentials over the same ten quarters. 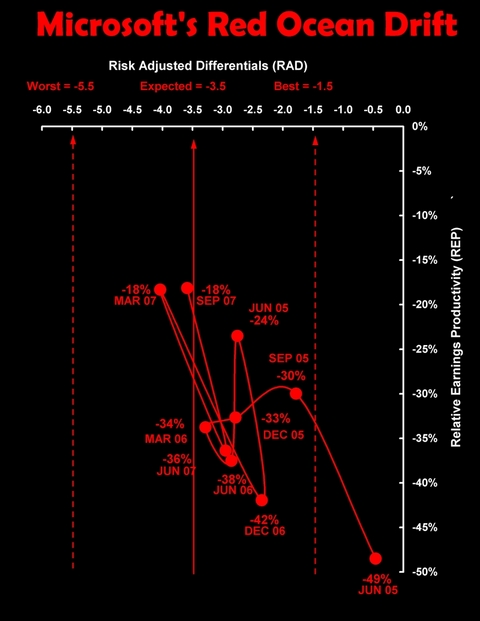 This chart shows there is a random drift toward the northwest. Revealing that investors don't like what they see. Even though there has been a marked overall improvement in relative earnings productivity, there is no positive direction along the coordinates in this chart.

Faced with this pattern, the best way to forecast MSFT's risk-adjusted differentials is to set 95% confidence limits. Fortunately, this is easy to do. RAD is a standard normal variable (mean zero and standard deviation one). So taking the last observation as the expected value (-3.5), the lower and upper confidence limits become -5.5 and -1.5 respectively.

MICROSOFT'S SHARE PRICE APRIL 2008
A fundamental assumption of my competitive stock pricing model is that the management of a company will maximize earnings over the intervening periods. Microsoft's quarterly sales revenues jumped by over 27% in September 2007 compared with 2006. Yet, over the same period its share of combined revenues fell 3.6 share points from 80.1% to 76.5%. Even so, the company is far from the ideal of maximizing earnings: the following table pegs maximum earnings market share at 63.1%.

There is no way management would entertain the significant loss in revenues associated with a 13.4 point drop in market share ... just to maximize earnings. That's why the forecast share price here is contained within the five year range of low and high market prices (about $24 to $34). And at a steady loss 3.6 share points per year it will take around three years for Microsoft to be driven to maximize earnings as a result of Google's revenue growth. Looks like shareholders will be reading more of the same old red ocean story well into the future.

WHAT DOES THE FUTURE HOLD?
No one knows. But it's a clear possibility that either Mr. Gates and Mr. Ballmer must come up with a blue ocean strategy or continue to watch their market share fall as Google adds new sources of revenue they cannot acquire. What do you think?

Victor Cook
66 Followers
Victor Cook, Ph.D. is Emeritus Professor of Management at Tulane University. In addition to his university service, Cook has experience in senior management positions. Among those he has been for over thirty years, president and lead designer at thestyle.com Professor Cook began his academic career as a doctoral fellow at the Marketing Science Institute and Lecturer at the Wharton School. He moved to Cambridge, MA as Associate Director of Research when MSI was acquired by the Harvard Business School. He served six years as an Assistant Professor of Marketing at Chicago Business School before joining the Tulane faculty. Visit his blog: customersandcapital.com.