How do you judge whether a company has a successful R&D program? Number of patents? Increasing market share? Inventing exciting products?

None of the above. A great R&D team creates products that drive profits for years to come. Take Apple (NASDAQ:AAPL), perhaps the most innovative company on the planet. From a shoe-string R&D budget came the iPod, iPhone, and iPad. Despite spending far less than Cisco (CSCO), Microsoft (MSFT), or Oracle (ORCL), Apple has consistently delivered greater yearly revenue and earnings growth. Apple gets more for less. 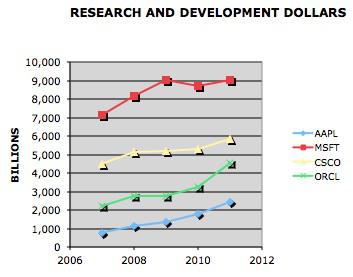 Inventing great products takes time. Money spent in the lab doesn't show up in the bottom line right away, maybe not for many years, maybe never. Investing in R&D isn't for those who seek instant gratification.

That's why I've set up a graph comparing Apple's operating income to its lagging 2- and 3-year R&D expenses. 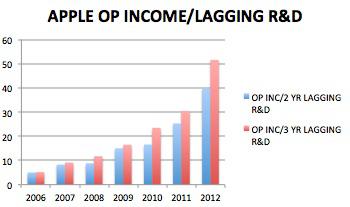 Not everybody leverages their R&D.

Compare Apple to Microsoft. Microsoft has struggled to leverage its R&D: Over the last 8 years, a buck spent in R&D translates into $3 in operating income two years later. Microsoft has been stuck in the $3 range for years. Will Windows 8 propel profits? Unclear. Unfortunately for Microsoft, Vista and Windows 7 couldn't disrupt this pattern. 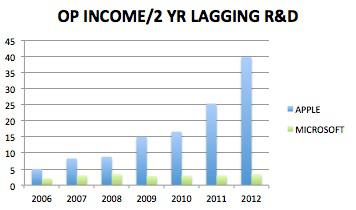 Kudos to the R&D guys at Apple.

Each year R&D appears to be giving profits a bigger boost. (Obviously more than R&D played a role in giving Apple strong earnings -- marketing, execution, service to name a few.)

For every $1 spent in its 2010 R&D, Apple brought in $40 in operating income two years later. Probably the rest of 2012 won't see a 40:1 ratio: Q1 is usually Apple's highest income quarter. A 36:1 ratio is more doable, giving Apple a potential $64 billion 2012 operating income, or an astounding and perhaps a bit crazy EPS of $52. When it comes to leveraging R&D dollars, Apple is the master.

Is innovation over at Apple?

Not according to the above chart: Income is rising exponentially compared to the R&D input. Moreover, the company has been boosting its R&D budgets. Last year, Apple spent 36% more on R&D than in the previous year. If the money was well spent, Apple will be delivering sensational earnings in the years to come.

Apple has been making extraordinary profits from its R&D team. There is no let-up in the trend. Innovation is alive and well at Apple. The stock remains a buy.

Stephen Rosenman
1.52K Followers
Stephen Rosenman enjoys analyzing the financial health of companies and pointing out areas the market is either not recognizing or ignoring. A long time investor, I put my money where my mouth is. That's why I'm passionate about my positions. I trumpet companies I believe in and back my articles up with data and graphs. Every now and then, I'll write something a little goofy to lighten it up...