There is a big controversy in shale well natural gas production.

Aubrey K. McClendon, CEO of Chesapeake Energy (CHK), is one of best-known proponents. Texas geologist Arthur Berman is one of the most outspoken critics of the shale gas revolution.

The controversy is important to not just to the US natural gas sector, but to the coal sector as well. James River Coal Company (JRCC) CEO mentioned shale gas declines in last week's earnings conference even though they produce no shale gas. Is shale gas abundant and cheap to produce? If it is, coal demand is threatened, as cheap and clean-burn natural gas is preferable. If it is not, people buying into the shale gas hype better take their money back and invest in US coal mining shares, as coal remains the old king in energy supply. I will explain the controversy and provide a math model for people to take a stand.

This article is about the shale gas controversy and my take, and how my math model matches against real production data. My model and my take remains my opinion only. The future will be the ultimate judge. I welcome exchanges with readers and industry experts.

For a starter on the controversy, please read the latest news article Meet the man the shale gas industry hates, a Rolling Stone article The Big Fracking Bubble, a NYT report Insiders Sound an Alarm Amid a Natural Gas Rush, disclosing hundreds of pages of insider documents and emails. My recent instablog post discussed the subject. Finally, read the blog site of Arthur Berman.

Energy investors want to know who is right to make a smart decision on what to buy. But intrigued by the technicality involved in the dispute, you may have a hard time figuring out what is disputed and how to take a stand.

Is shale gas economical? It boils down to cost and return. The cost part is less disputed. The return depends on natural gas prices and the volume of gas that can be produced from each well, called UER (Ultimate Economical Recovery) by the industry.

No shale well has gone through a full life cycle yet. So UER must be estimated based on models. A model must match the production data from existing wells. A model is correct if it projects productions that match actual data, vise versa.

Estimating UER of shale gas wells is not trivial due to these reasons:

Out of the 4 issues, the IP is the least subject to disputed. Whatever comes out of the well within the first 24 hours tells you the IP. After that, a well's production rate keeps dropping. The least certain, hence most controversy issue is how decline rate evolves over time. Different models are proposed leading to very different estimates of UER.

The shale gas industry projects good UERs of 5 BCF, 10 BCF or even higher. Mr. Arthur Berman believes the typical UER is between 1-2 BCF per well. One BCF is one billion cubic feet. Natural gas is priced in mmBtu (million British Thermal Unit). One mmBtu of natural gas is roughly one thousand cubic feet. Thus, if gas price is $2.00/mmBtu, a UER of 1 BCF can only fetch $2M. But if the UER is 10 BCF, the well can fetch ten times more at $20M. So the shale gas profitability is decided by the UER and gas price.

I use a simple math model to analyze the existing Barnett Shale production data to find out. The shale gas well counts and production volumes are listed in the data table listed further below.

Let me use plain English to describe the UER, the production rate and the decline rate.

UER is the daily production adding up. In math it is calculated by integration of the production rate over the time of a well's lifespan.

The formula gives Ri at zero time, and Rf at infinite time. It suggests that the decline rate approaches the final value in a decay fashion: First it drops fast, then it slows down towards a terminal value.

This is a reasonably generic one size fits all model. By picking different values of Ri, Rf and beta it can describe the decline all shale wells.

I ran the computer model against Barnett Shale production data to find the right set of parameters that project the productions that match the real data with minimum discrepancy (Sigma). The best matching values of three parameters are given under the formula shown above.

With the best fitting parameters found, I plotted out the Barnett Shale decline chart as below: 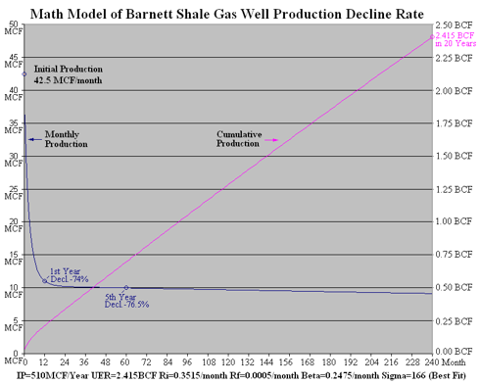 The UER for Barnett Shale is thus calculated to be 2.415 BCF in 20 years based on actual production data. The vindication is my projected annual production matches the actual numbers nicely as shown below: 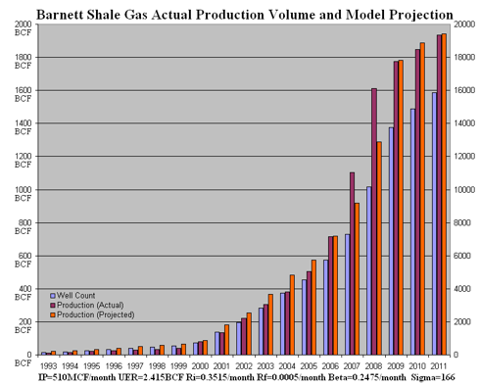 Note that for year 2007 and 2008, the production match was less ideal. I notice that the actual productions for those two years look inconsistent with well count so that two numbers could be reported wrong off. My projection seems to be more consistent with the well count. The data used is summarized in the table below: 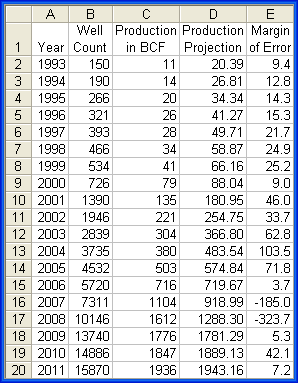 The Big Answer - What is the UER?

I discovered the Barnett Shale UER to be roughly 2.415 BCF per well. This amount of gas at $2.00/mmBtu price is worth only $4.83M! Sorry to disappoint folks in the shale gas industry!

Could the UER be much higher? Not likely:

I tried radically different parameters for the calculation. Some of them give poor matches of real data. But they all end up with an UER around 2 BCF or below, never much higher.

My model matches Arthur Berman's empirical decline chart created from actual shale well data. When I showed him the chart, he said he was not surprised it would match: 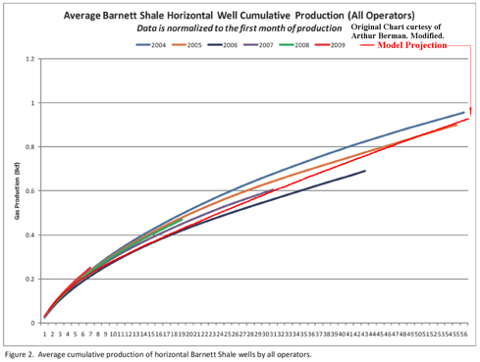 Please refer to my instablog post where I can make updates to elaborate more. Let me talk about what it means for investors here.

The lifetime cost of producing a shale gas well, based on my estimate is roughly $15M (the cost is more than drilling a well). I think producers needs to bring in $20M to cover the cost, pay salaries and provide a moderate profit. The UER I calculated, 2.415 BCF, assuming 20 years of production. If the well lifespan is shorter, the UER could be less.

For $15M investment, 2.415 BCF is not a lot of natural gas to get. Roughly $8/mmBtu gas is needed to bring in $20M for a reasonable profitability. Can such natural gas price be achievable? Is it sustainable for end users? Will some users back away from such high gas price?

Disappointed by Barnett Shale, the industry turned their attention to other shale plays like Haynesville and most recently Utica in eastern Ohio. McClendon pitched Utica to Jim Cramer on Mad Money last year.

What happened since then? The best Utica well, Buell 8H, dropped from 3010 BOE a day on Sep. 28 of 2011 to only 1040 BOE by the end of Q1 2012, a drop of 65% in just six months! (1 BOE = 5800 cubic feet of gas) CHK still believes the well can produce 13 BCF. Will the decline rate slow down as CHK hoped for? Berman pointed out that with short well history, it is hard to forecast the long term decline pattern. So far Berman thinks that Haynesville or Utica is not much better than Barnett in long term.

I see a dark future looming for the shale gas industry. They may need unsustainably high natural gas prices to be profitable.

Natural gas is recovering to go much higher. But until the natural gas industry is ready to face the reality and admit they were wrong in their rosy projections, I see no good reason to buy natural gas stocks. You are better off buying deeply discounted coal-mining stocks. Political fear mongering does not trump over the free market. Old king coal remains the cheapest energy source for many more decades, both in USA and overseas.

Invest In US Coal Instead of Natural Gas

So shale gas plays have low UERs and high cost per mmBtu, what do you do as an investor?

Natural gas and coal price will go up. Abundant and cheap natural gas is an illusion.

The shale gas industry has been telling a beautiful fairy tale. They have yet to acknowledge that they were wrong on Barnett so far. There must be a day of reckoning for the industry to face the reality. Until that day comes and the industry takes its consequences and suffers the casualties, stay away from this sector!

While the shale gas boom bursts, coal is still America's cheapest and most reliable energy source. Free market forces must trump over the political rhetoric. The US coal sector is unfairly punished and trading at deep discounts. This is a big investment opportunity.

Looking at prices of shares like James River Coal Company or Patriot Coal Corp. (PCX), you would think that coal price must be so low they are giving out the black gold for free. The truth is Appalachian coal is trading at $58 per ton, higher than a few years back. Current Coal price is still marginally profitable for at least some coal companies. Peabody Energy Corp (BTU) recently reported a profit.

I wonder why no such deep discount of shares occurs in the natural gas sector, in names like Chesapeake Energy and EnCana (ECA)? EnCana produces 3.3 BCF of natural gas per day and booked $1.8B revenue for the quarter, but they have a tiny $12M of profit? How did they amortize the costs?

You should be skeptical to these US oil and natural gas players:

I recommend that you load up on US coal mining companies:

I own JRCC and PCX and others, I will not dwell onto the good and the bad of specific stocks. I am bullish on the US coal sector. All coal stocks are good buys. I will let the readers pick their own favorites.

Mark Anthony
1.76K Followers
Mark Anthony, a pseudonym, is an IT professional and former physics Ph.D. student. Visit his blog: Stockology (http://stockology.blogspot.com/)
Follow
183 Comments
To ensure this doesn’t happen in the future, please enable Javascript and cookies in your browser.
Is this happening to you frequently? Please report it on our feedback forum.
If you have an ad-blocker enabled you may be blocked from proceeding. Please disable your ad-blocker and refresh.