While people can complicate investing in a myriad of ways, only two characteristics ultimately matter - risk and return. My personal and professional investing revolves around the simple maxim of trying to earn incremental returns for the same or less risk. The strategy highlighted below has accomplished this feat over long time horizons, and is easily replicable in financial markets.

In addition to the bellwether S&P 500 (SPY, IVV), Standard and Poor's produces the S&P 500 Dividend Aristocrats Index. This index measures the performance of equal weighted holdings of S&P 500 constituents that have followed a policy of increasing dividends every year for at least 25 consecutive years. The index data is available since the end of 1989, and over the subsequent period, the S&P 500 Dividend Aristocrats index has had a higher average return than the S&P 500 (12.05% vs. 9.82%) while having less variable returns (15.11% standard deviation of annual returns vs. 18.67%). 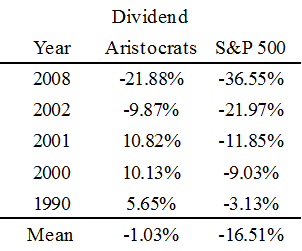 Another notable factor of the dividend strategy is that when it underperformed the S&P 500 by the largest differential (1998, 1999, and 2007) the market was headed towards large overall losses. Perhaps, this correlation is spurious and not a leading indicator, but it makes sense that prior to the tech bubble burst in the early 2000s that the Dividend Aristocrats naturally featured less recent start-ups because of the long performance requirements for inclusion. It also makes sense that when markets were heading to new all-time highs in 2007, the market correction in 2008 would be less severe for the high quality constituents in the Dividend Aristocrats index. 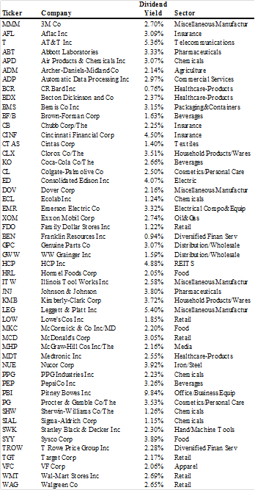 Dividend Aristocrat investing has produced higher risk-adjusted returns over very long time horizons, and should be considered as part of your strategic equity allocation.

Constituents in S&P HY Dividend Aristocrats and SDY Not Listed Above:

Disclosure: I am long SPY.

Disclaimer: The analysis for this article was undertaken to analyze whether I should shift a portion of my indexed U.S. equity funds to a dividend strategy. I am evaluating SDY.

Ploutos
21.15K Followers
Institutional investment manager authoring on a variety of topics that pique my interest, and could further discourse in this online community. I hold an MBA from the University of Chicago, and have earned the CFA designation. My articles may contain statements and projections that are forward-looking in nature, and therefore inherently subject to numerous risks, uncertainties and assumptions. While my articles focus on generating long-term risk-adjusted returns, investment decisions necessarily involve the risk of loss of principal. Individual investor circumstances vary significantly, and information gleaned from my articles should be applied to your own unique investment situation, objectives, risk tolerance, and investment horizon.
Follow
22 Comments