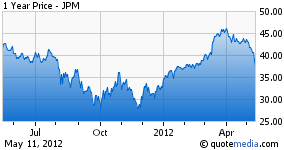 JPMorgan Chase (NYSE:JPM) on Thursday, after the market close, announced a $2 billion hedging loss against a $100 billion derivative portfolio, by the company's chief investment officer (CIO). On Friday the market punished J.P. Morgan by dropping the price of the stock 9%, closing slightly above $36 dollar a share.

Jamie Dimon, Chief Executive, JPMorgan Chase, said on the Thursday conference call that the bank's hedging strategy was "flawed, complex, poorly reviewed, poorly executed and poorly monitored," He called the mistake "egregious, self-inflicted," and stated: "We will admit it, we will fix it and move on".

I saw this movie trailer once before in 2007. The 2008 financial crash was a full-length horror film.

I pray that this isn't the beginning of another financial crisis but this is exactly how it started in January 2007 with mortgage companies and small banks losing money and closing followed by the first big Wall Street failure, Bear Stearns, in March of 2008. Is it possible that the bankruptcy of MF Global last October 31, 2011, the seventh largest bankruptcy in U.S. history, is this financial crisis cycle's Bear Stearns - if a full blown crisis does occur?

A $2 billion dollar trading loss will not put JPMorgan out of business. They generate that much revenue in a month. Unfortunately, other financial institutions may not have the capital and expertise to weather another financial crisis. JPMorgan put this strategy on and most likely other firms. Time will tell who they are and if they will survive. However, if this is the first inning of another crisis, before it's over, the industry's grim reaper may come knocking on JPMorgan's door. This possibility is real and is frightening.

The western financial world is struggling with debt and political prices are being extracted at the voting booth for this economic and regulatory mismanagement. Look at the French and Greek elections. The citizens in both counties rejected draconian austerity measures demanded by German Chancellor Angela Merkel on behalf of the western banking system in exchange for additional European Central Bank and International Monetary Fund assistance. Voters in Germany's northernmost state ousted a governing center-right government made up of the same parties as Chancellor Angela Merkel's federal coalition, too.

French President Nicolas Sarkozy was ousted by voters and replaced with France's president-elect, François Hollande. Mr. Hollande campaigned on raising taxes on the rich and protecting workers' and citizens benefits.

Greek voters elected Neo-Fascists in parliament for the first time while the hard left finished in second place. The Syriza Party, a coalition of radical left and green groups took 16.6% of the vote. The far-right party known as the Golden Dawn elected 10 members. This was feared but unexpected.

Back to JPMorgan, the 2700 plus page Frank-Dodd Wall Street Reform and Consumer Protection Act, passed in 2010, was designed to reform deregulation of the financial industry, preventing reckless, overleveraged, and proprietary trading by banks.

It is a flawed piece of legislation that was passed and signed into law before it was completely written. The Volcker Rule, named after former Federal Reserve board Chairman Paul Volcker, is but one item out of many in the Act still being debated by congress and the banking industry and their lobbyists.

Congress is scheduling hearings on the opaque losses and industry regulators are also looking into the trading activity of the CIO. Jamie Dimon also stated losses could grow beyond $2 billion.

Marvin Clark
9.74K Followers
Marvin R. Clark is the Managing Principal of Monsoon Wealth Management (MWM). Monsoon offers affluent individuals and business owners’ wealth management, economic, and market advice throughout America. Based in Scottsdale, Arizona, Monsoon’s major task is employing a macroeconomic top-down research and analysis approach to formulate a relative value investment thesis across debt, equity, and commodity asset classes. We provide an actionable roadmap during this extraordinary period as geo-political and economic change accelerates. Prior to opening Monsoon Wealth Management in 2007, Marvin spent 10 years in the capital markets, fixed income division, of Charles Schwab & Co. Before Schwab, he spent 15 years on Wall Street with The Pilgrim Group, Bank of America, and Morgan Stanley. Marvin is the publisher/author of the Fixed Income Daily, a financial blog dedicated to providing essays and video clips from various analysts, money managers and officials, shedding light on the economy and markets. He is a contributing author with over 9,800 captive subscribers to the premier award-winning stock market opinion and analysis - Seeking Alpha and a contributing columnist for the Dubai-based, bi-lingual, Alorrya.com. Marvin is a popular featured and keynote speaker throughout the southwest and a recent guest faculty member for A.T. Kearney with Institute for Supply Management’s The Center for Strategic Supply Leadership CSSL forum. His unique interpretation of macroeconomic data and smooth writing style has been a reference source online for many financial newsletters including Yahoo Finance, Reuters, MarketWatch, Blogrunner, istockanalyst, The New York Times, Real Clear Markets, Kiplinger’s, and many, many others.
Follow
2 Comments